From the Archives, 1972: RAAF flies a survival mission for Cape Barren geese

The Royal Australian Air Force yesterday flew a survival mission for 38 of the world’s rarest geese.

It flew the Cape Barren geese – of which there are only 6000 left in the world, all in southern Australian waters — 220 miles from Flinders Island to King island in Bass Strait in search of a new home. 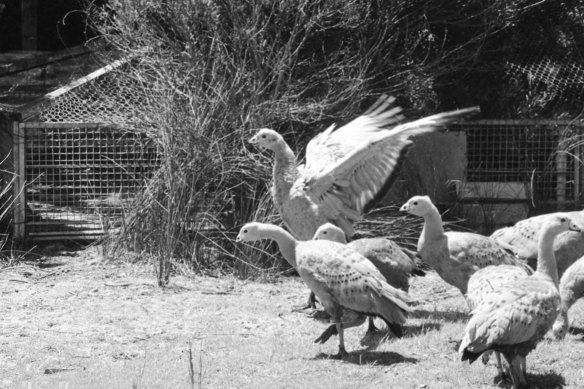 The geese, with their waxy-lime beaks and soft grey shadow forms, rested silently in the old Dakota. But only for an hour-and-a-half.

The flight began with a request from the Tasmanian National Parks and Wildlife Service. The Cape Barren geese live in four surviving strongholds along the southern Australian coast.

The wildlife service sought RAAF help in moving yesterday’s migrants from the Furneaux Group of islands, where they are most prolific, to King Island in a bid to extend their breeding grounds and strengthen their hold on the future.

At Flinders Island, Tasmanian national parks and wildlife service agent Derek Smith, a man with a warm Australian accent and an Archibald-prize face was tying the young geese, mostly under five months, in sacks which left their heads free.

Behind his private gallery of the past, culled from the sea with the now-blind portholes of sunken ships, whale bones and rusted sailing tackle, was his greatest prize… Forty Cape Barren geese caught off neighbouring islands roamed the yard, moving silent and graceful, their greyness spilling into their own shadows. Here was his greatest museum: A living link with a 50-million-year lifeline of geese-like birds… but one which has recently been on the brink of extinction.

The flight to King Island went well. There, under police and wildlife service supervision, the rare geese were handed over to locals, mostly farmers, who will try to develop from them a local pool of breeding stock.

One of the farmers who offered to take three birds in the survival programme said: “I saw one of them flapping about on TV. I thought this would be one way of equalising the times I have caused birds to flop about.”

The geese live on grass and some of the King Islanders are concerned about long-term competition. “If that happens,” said Bryce Robins, who also took a couple home, “we can always shoot ’em.”

The RAAF help was sought as the only way to make a direct flight, with minimum handling at a low height. Cape Barren geese flown to the mainland by commercial aircraft have sometimes bled from the beak.

The Bass Strait Islands have been notorious for the decimation of wildlife since the first onslaughts of the sealers. But yesterday it was a different story. And the RAAF mission was not only a search for new fields and new skies for geese alone.

As a national effort, it marked a time of Man’s changing consciousness of nature and an understanding of his enormous power to protect it.

At 1000 feet we watched the geese as they lay in two wooden crates strapped in the Dakota and we waited for goose music. The geese lay still and were silent.

But only for an hour-and-a-half.