From Queen to King, the administrative changes begin

Any death creates paperwork. All the more so when one is the head of the Commonwealth.

Here in Australia, the death of Queen Elizabeth II and the accession of her son King Charles III is prompting administrative changes.

A quirk of the Victorian Constitution means state MPs will have to swear allegiance to the new monarch before parliamentary proceedings can continue. Victoria is the only state or territory which requires members of both houses to re-swear their allegiance to King Charles III.

There have been immediate changes in the legal system. Senior barristers in Australia who were Queen’s Counsel (QC) are now known as King’s Counsel (KC). In addition, criminal charges against accused people will be brought in the King’s name instead of the Queen.

The Queen’s birthday was April 21, but most Australians are accustomed to a public holiday on the second Monday in June to mark the occasion. Queenslanders get their royal public holiday in October. 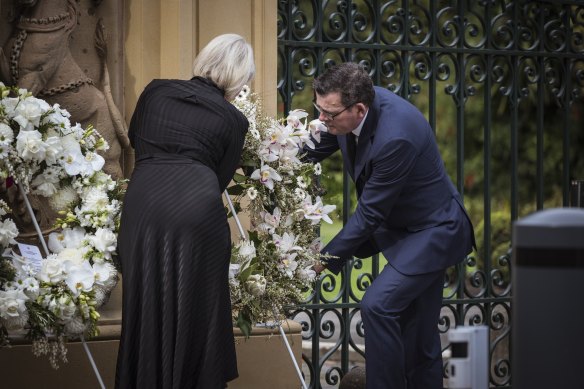 Premier Daniel Andrews and wife Catherine lay a wreath in honour of the Queen at Government House on Friday.Credit:Chris Hopkins

Australians needn’t worry that the death of her majesty will slow down the production and issuance of passports. All current Australian passports – which currently refer to “Her Majesty Queen Elizabeth the Second” – remain valid, although future passports will reflect the accession of His Majesty King Charles III.

In addition, portraits of the Queen will continue to be displayed at Australian citizenship ceremonies throughout a period of mourning, according to advice given to councils on Friday.

“There will be an official announcement in parliament for when His Royal Highness, King Charles III will be proclaimed as the new sovereign,” a statement from the Australian Local Government Association reads.

“Following this announcement further advice on future protocols (including the use of portraits of the new King) will be provided.”

Similarly, RSL clubs might boast prominent paintings of the Queen for some time. The RSL is yet to learn whether King Charles III will take over his mother’s role as its patron.

The loose change in our pockets and wallets will also change. New $2, $1, 50¢, 20¢, 10¢ and 5¢ coins with a portrait of King Charles III are expected to start entering circulation from 2023, with the design to come from The Royal Mint in Great Britain. However, new $5 notes with the King’s face on them could be years away.

Anne Twomey, professor of constitutional law at the University of Sydney, said passports, official seals and currency which mention the queen would all remain valid.

“The system of change from one monarch to the next is legally seamless, leaving it a matter for the people how they decide to mark the change in a ceremonial and symbolic manner,” Twomey wrote in The Conversation.

“The current one is from 1973, and it refers to Queen Elizabeth the second, as the Queen of Australia and therefore doesn’t refer to her successors. We need a new Royal Styles and Titles Act for King Charles the third.”

Just hours after the Queen’s death, Australian Defence Force personnel began affirming their allegiance to the new king, according to a caller to Melbourne radio station 3AW.

Julie, who did not use her last name, said her son and five others who were sworn in on Friday had to “scramble around to find out who they were affirming their allegiance to, and it was King Charles III”.

“Apparently they normally get photos taken with the photo with the Queen behind them, but they weren’t quite prepared, so they had to scribble out Her Majesty’s name and then put King Charles’ in,” she said.

Receive a wrap of our coverage as the world mourns Queen Elizabeth II in our Morning Edition newsletter. Sign up here.