Demonstrators formed a human chain as they rallied against Amazon’s plan to build a facility in a small French town, according to reports.

Hundreds of people gathered in rallies across France to protest Amazon’s plans to expand operations in the country.

In the town of Fournes, between 800 and 1,000 people formed a human chain around a 400,000-square-feet facility that Amazon had established, Al Jazeera reported. 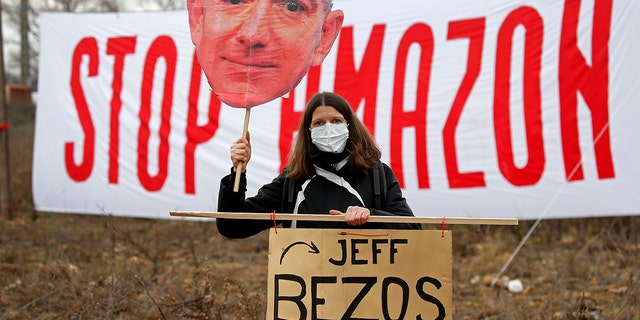 OURNES, FRANCE – JANUARY 30: An opponent holds a cutout sign depicting Amazon CEO Jeff Bezos, in front of a banner reading "Stop Amazon" during a rally against plans to build a giant Amazon warehouse on January 30, 2021 in Fournes (Gard), France. The project to set up a huge Amazon warehouse by the e-commerce giant in Fournes, near the Pont du Gard, faces strong opposition. The demonstrators oppose the "betonization" of 14 hectares of land a few kilometers from the Pont du Gard, (classified as a historical monument as a UNESCO World Heritage Site). (Photo by Chesnot/Getty Images)

“It’s two years that the citizens of Fournes and its surroundings have fought against the installation of a giant Amazon warehouse,” said Raphael Pradeau, spokesman of French citizens’ activist group Attac. “At the start, they were a bit alone against everyone, but they have succeeded in halting the project thanks to legal recourse.”

“We want to show that these are not small isolated fights and that we can mobilize hundreds of people who are ready to return to stop the work,” Pradeau added.

In other towns that supported the protests, banners read “Amazon, Fiscal Vampire” and “No mega warehouse,” according to France 24.

“Today, we condemn an economic system that is at the end of its rope and which is using the planet,” said Isabelle Schaeffer, a member of an environmental group in the Sud Alsace region.

The protesters decried Amazon for “unfair competition” practices, particularly with how the group manipulates its taxes.

Additionally, the protesters highlighted the “precarious” work agreements and conditions that employees suffer at the company’s whim. Many people are hired during peak holiday hours and then “thrown out” shortly after.

Amazon France issued a statement saying it had “become the target of certain organizations that want to make the causes they represent known.”