Four-day bank holiday CONFIRMED for next summer! The Queen’s Platinum Jubilee plans are set in stone as UK will enjoy extended break to celebrate her 70 years on the throne in 2022

Britons will enjoy a four-day bank holiday next summer to celebrate the Queen’s Platinum Jubilee as the nation marks her 70 years on the throne.

Buckingham Palace said 2022’s extended bank holiday will run from Thursday, June 2 to Sunday, June 5 and include a raft of ‘public events and community activities’ including a Platinum Party at Buckingham Palace and The Big Lunch – which will encourage neighbours to join together for street parties.

Queen Elizabeth II’s coronation was held on June 2, 1953 – just more than a year after she acceded to the throne aged 25 following her father George VI’s death. It was the first coronation ever to be televised, with 27million people in the UK tuning in.

The BBC is set to take a central role in next year’s celebrations, with Britons invited to apply to tickets to the Platinum Party at the Palace – which will see ‘some of the world’s biggest entertainment stars’ join together to create a live concert ‘to celebrate the most significant and joyous moments from The Queen’s seven decade reign’, according to Buckingham Palace.

Plans for the Platinum Jubilee celebrations have been released for the first time today as the Queen celebrates her 69th year on the British throne.

A Buckingham Palace spokesman said: ‘An extended bank holiday, from Thursday 2nd to Sunday 5th June, will provide an opportunity for communities and people throughout the United Kingdom to come together to celebrate the historic milestone.

‘The four days of celebrations will include public events and community activities, as well as national moments of reflection on The Queen’s 70 years of service.’

On the Thursday of next year’s events, Trooping the Colour is expected to be staged in full for the first time since the pandemic. The following day a Service of Thanksgiving for the Queen’s reign will be held at St Paul’s Cathedral and the third day of the weekend, a Saturday, will see the Queen joined by members of the royal family at the Derby, held at Epsom Downs.

That evening the live concert will be staged at Buckingham Palace. ‘Members of the public will be invited to apply to attend this special event and details of the ballot for UK residents to secure audience tickets will be released in due course,’ the Palace revealed. 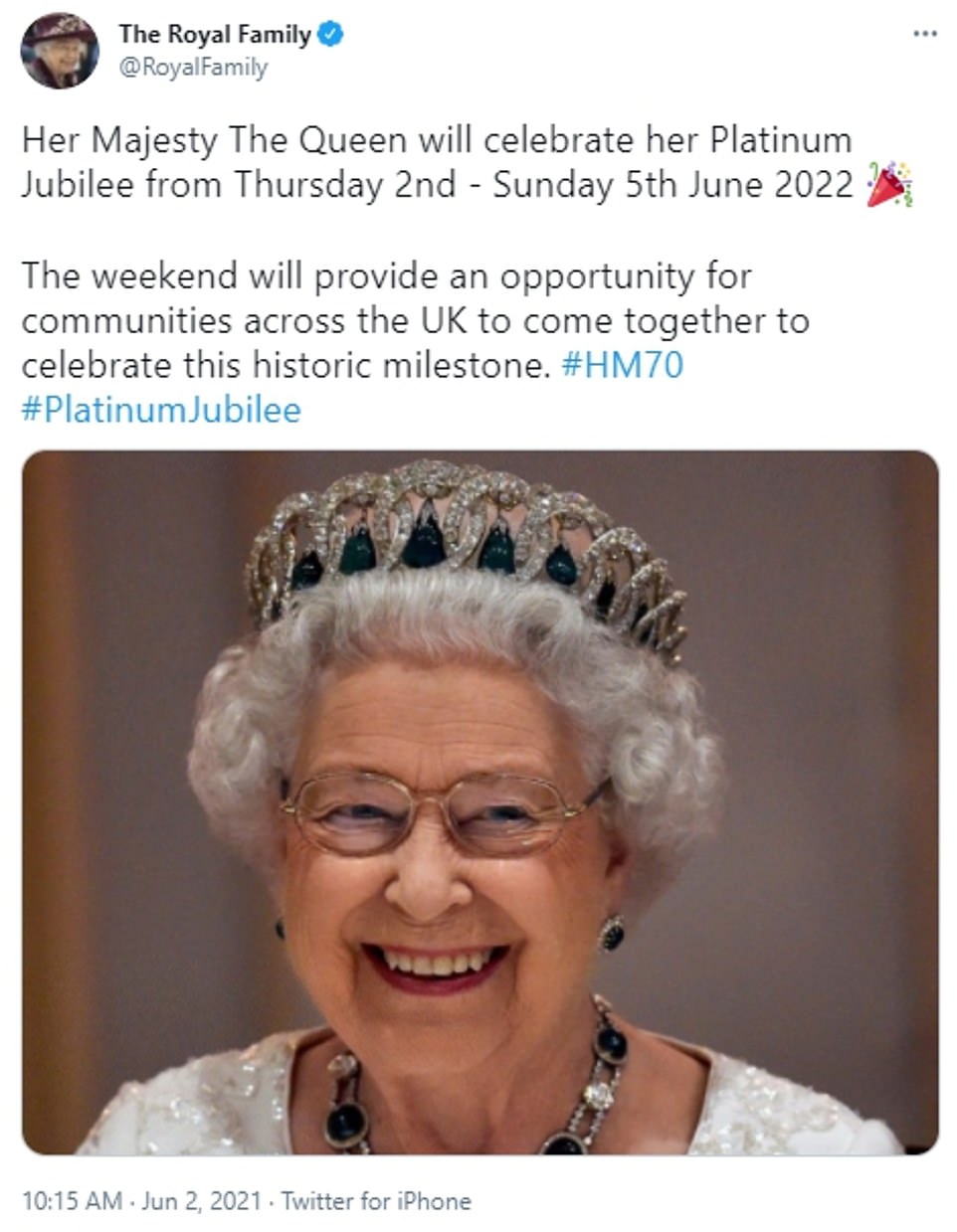 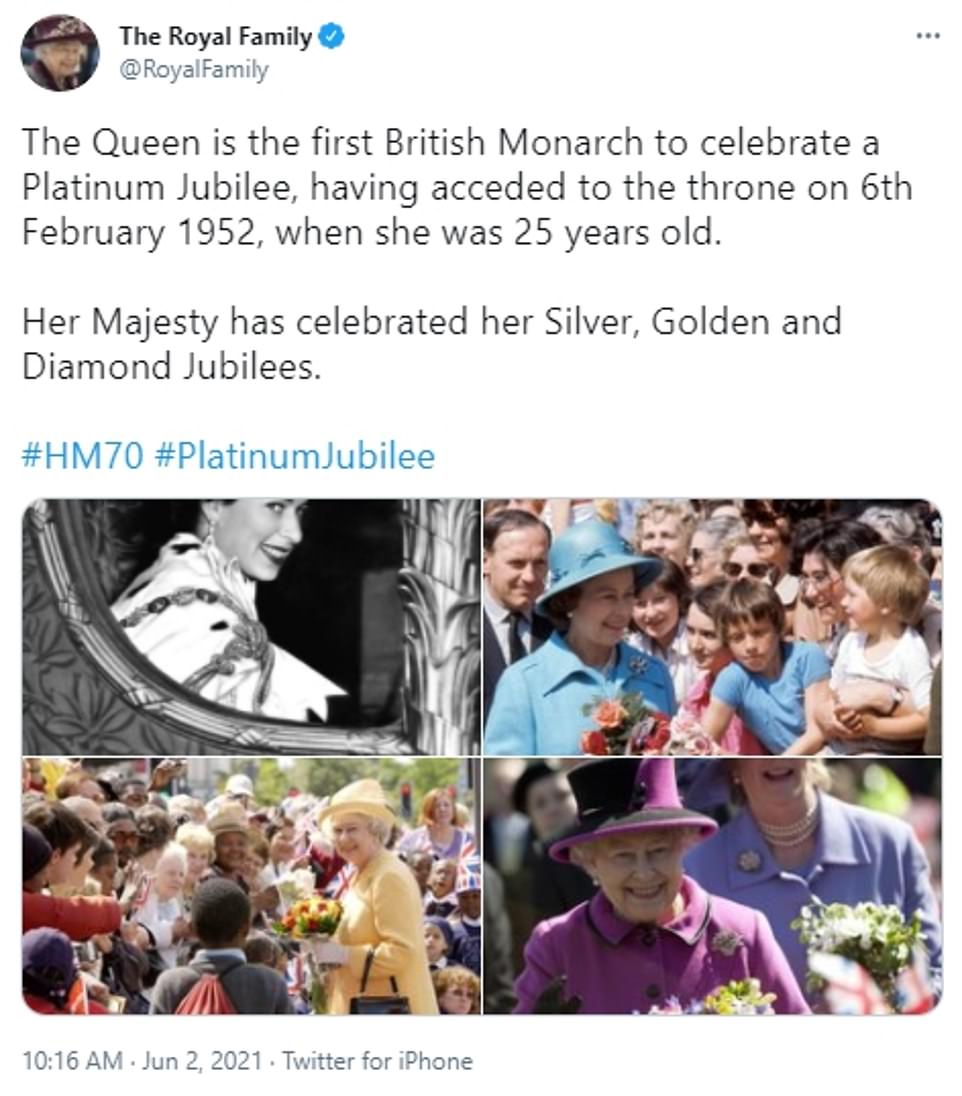 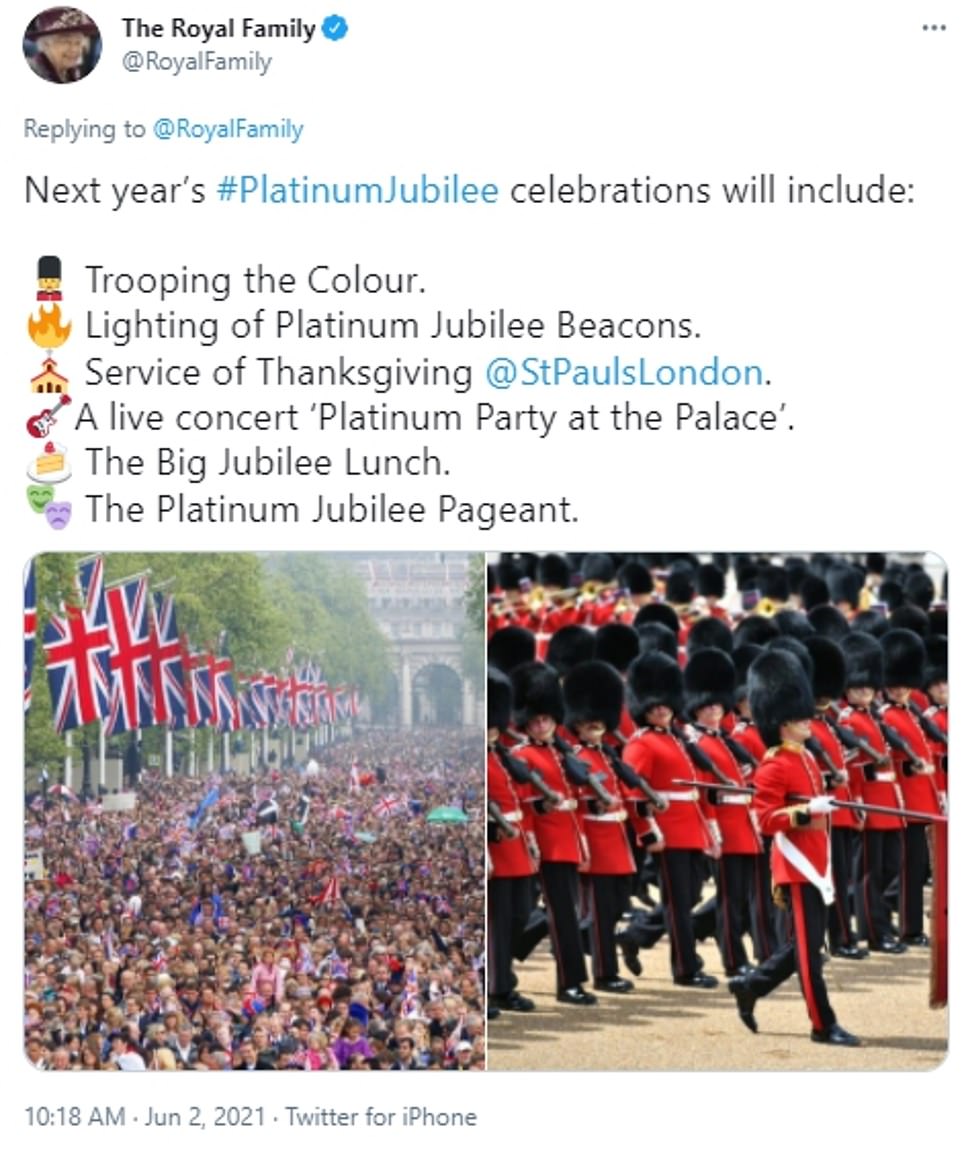 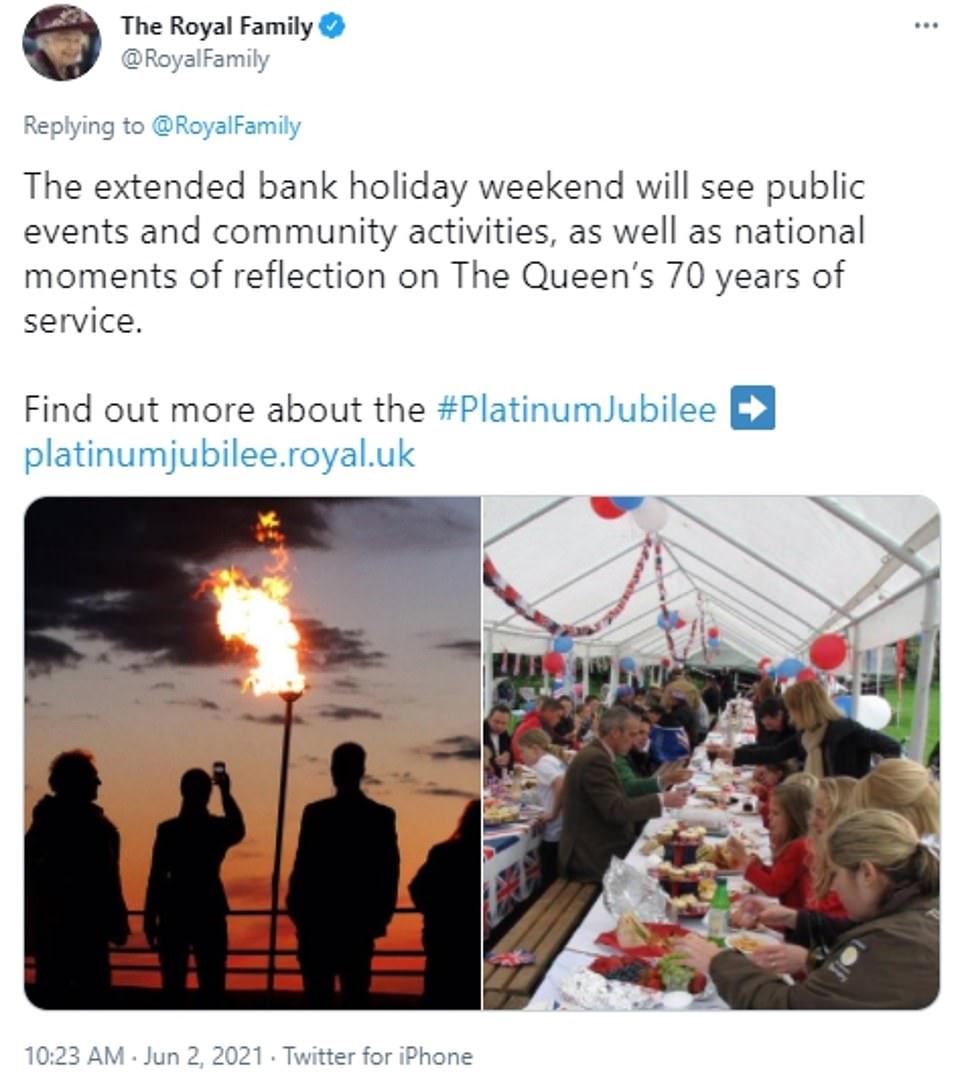 Performers have yet to be named but it is billed as bringing together some of the world’s biggest entertainment stars to celebrate the most significant and joyous moments from the Queen’s seven decade reign.

A Buckingham Palace spokesman said today: ‘In 2022, Her Majesty The Queen will become the first British Monarch to celebrate a Platinum Jubilee, seventy years of service, having acceded to the throne on 6th February 1952 when Her Majesty was 25 years old.

‘There will be year-long Platinum Jubilee celebrations throughout the United Kingdom, the Commonwealth and around the world as communities and people come together to celebrate The Queen’s historic reign.

‘Throughout the year, Her Majesty and Members of the Royal Family will travel around the country to undertake a variety of engagements to mark this historic occasion culminating with the focal point of the Platinum Jubilee Weekend in June – one year from today.’