Match of the spray: 1,000 fans go through anti-Covid disinfection pods before being allowed to watch Northern Ireland play football

Every supporter was asked to step through one of the pods before the crunch showdown at 7.45pm, which welcomed Slovakia to Belfast’s Windsor Park for the UEFA 2020 Play-off finals match.

The machine, built by 4Ur Protection, helps to limit the spread of coronavirus by firstly taking a reading of fans’ temperatures using an infrared scanner.

If all the measurements look normal, they can proceed to the next stage and move forward into what is called the ‘sanitising tunnel’. 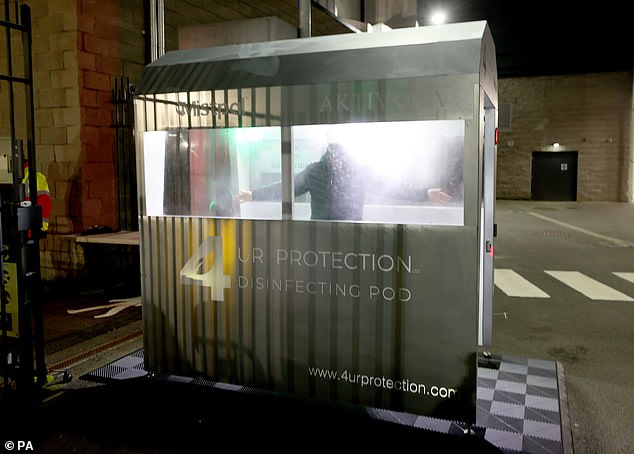 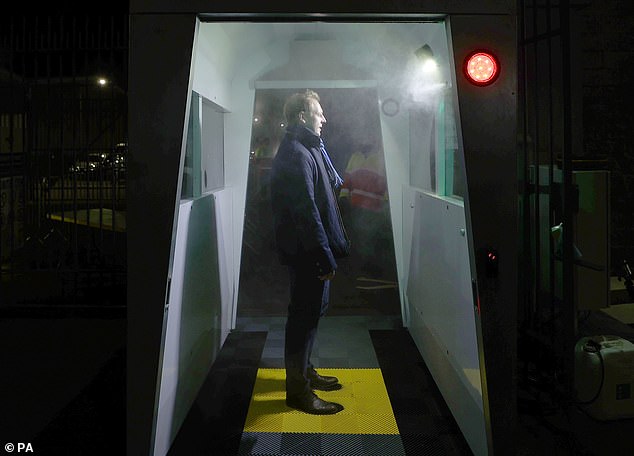 A man stands inside the disinfection pod ahead of the crunch showdown, which welcomed Slovakia to Belfast’s Windsor Park for the UEFA 2020 Play-off finals match

UV light is then used to kill off any other germs on the person’s clothes or belongings and then air-sanitising and purification spray is deployed.

On its website, 4Ur Protection says: ‘A MistPal cleansing pod at the entrance will show your staff and the public that you are taking customer safety extremely seriously.

‘All goods passing through the MistPal pod will also receive the same level of protection.’

The concept has also been tested by CLeanTech and was experimented with by Hong Kong International Airport.

The BBC’s Sports Editor Dan Roan tweeted: ‘One of the keys to getting fans back inside sports venues?

‘All of the 1000 N Ireland supporters allowed inside Windsor Park must pass through one of these ‘disinfecting pods’ & have temperature checks.’

This follows four days of arguments between lawmakers, and hours after they realised the original Covid rules were due to end a day later than they had originally thought.

The new rules will see an extension of the current circuit-break lockdown followed by a partial reopening of the hospitality sector, Stormont sources have said.

It is understood that the DUP, UUP and Alliance voted for the proposals, made by Economy Minister Diane Dodds, while Sinn Fein voted against and the SDLP abstained. 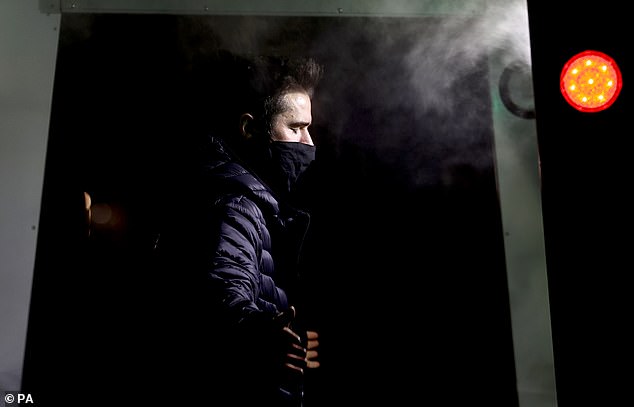 A member of the public pauses in the disinfection pod. The machine, built by 4Ur Protection, helps to limit the spread of coronavirus by firstly taking a reading of fans’ temperatures

According to reports, under the new rules, close contact services, including hairdressing, beauty treatments and driving lessons, will resume on November 20 by appointment only.

Unlicensed premises, including cafes and coffee shops, will also reopen on November 20, with restricted opening hours to 8pm. However, no alcohol can be consumed in these premises.

All other sections of hospitality that have been closed during the circuit-break will open on November 27.

Pubs and bars permitted will be permuted to sell sealed off-sales from November 20.

A Sinn Fein source said the party voted against the proposals because it ran contrary to the guidance from Stormont’s medical and scientific advisers to extend the circuit-break in its entirety for two weeks.