Tougher action than just restricting the number of flights from India – including a complete ban – might be needed, a senior Victoria Health Minister says, as the subcontinent experiences a catastrophic surge in cases.

Australia’s decision to restrict travel to and from India has already left Indian Australians separated from home and loved ones anxious and worried and any tightening of the rules could be devastating for them. 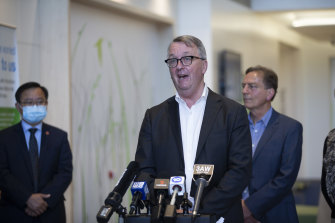 Victoria’s Health Minister Martin Foley said on Friday that he supported the national cabinet decision to cut the number of flights from India, but said more drastic measures – which could include a complete ban on flights from the region – might be needed in future.

“It is perfectly available to Australia to look at what other mitigation measures we can take to manage that,” he said.

This week India recorded 312,731 new infections in a 24-hour period – the highest daily case count in a single country since the virus surfaced in China more than a year ago.

Victorian authorities were so concerned about the COVID-19 epidemic driven by new, mutant strains of the virus that the state supported an immediate ban on all travellers from India, Pakistan and Bangladesh ahead of the decision being made at Thursday’s national cabinet meeting. 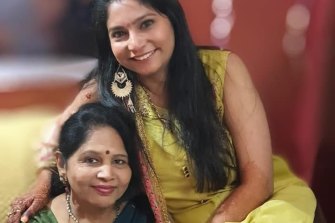 Devyani Upadhyay with her mother Sita, who she hasn’t seen for 18 months.

Victorian Health Minister Martin Foley said on Friday that arrivals from India are now being separated on the tarmac at airports and are being treated with a higher degree of caution.

He said people from the subcontinent made up a disproportionate component of active cases in Victoria’s quarantine program.

Melbourne woman Devyani Upadhyay was one of those left with questions after Prime Minister Scott Morrison announced the new travel restrictions at a press conference on Thursday, but did not give any clear dates for when the rule would be enforced and how the cap would be decided.

Ms Upadhyay is a permanent resident of Australia. Her mother Sita, who usually travels to Australia to stay with her daughter for up to a year at a time, has been trapped in her home in Vadodara, in Gujarat state for more than a year due to the pandemic.

“It is very heartbreaking,” Ms Upadhyay told The Age. “It’s very scary right now [in India], because of the cases. And she literally hasn’t stepped out of the house. It’s not mentally healthy.”

NSW Premier Gladys Berejiklian said on Thursday when there were high rates of infection in another country, it was mirrored in more positive tests in hotel quarantine but she didn’t think it was “fair or appropriate” to single out one nation due to higher COVID-19 rates.

“I don’t think it’s healthy to identify one nation ahead of others because that can change,” she said.

“The rates of infection go up and down … We just have to make sure that our quarantine system is as foolproof as possible, because Aussies who want to come home should have the right to do that.” 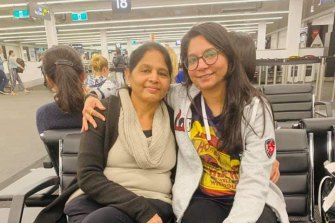 As her mother is not counted as immediate family for the purposes of gaining a visa into Australia at the moment, Ms Upadhyay said Thursday’s announcement extinguished any hope she was holding onto of seeing her this year.

“I totally respect the government’s rules, but it’s just they need to make an exemption for people who don’t have any family over there. My mum has no family – my dad passed away five years ago,” she said. “Is it going to take another year? We don’t know.”

Ms Upadhyay said she was kept awake at night worrying about her mother who is in her late 50s.

“God forbid something happens to her and we can’t even reach over there,” she said.

“Everyday we are crazily looking all the time for ways we can bring her over here.”

She said neighbours were bringing her mother groceries so she wouldn’t need to leave the house.

“It’s very scary, it just feels bad. Parents are very good, they don’t to give any kind of worry to their kids but we feel helpless because we are over here.”

Meanwhile in India, others are questioning the fairness of increasing restrictions on India more than other countries.

Australian citizen Sravanth, who did not wish to use his surname out of fear speaking about the government’s policy may impact his dealings with the immigration department, was shocked by Mr Morrison’s announcement.

The 34-year-old has applied for Australian citizenship for his 13-month old daughter who was born in May last year in the south of India.

Sravanth lived in Australia for more than a decade before he and his wife returned to India in 2019 to undertake IVF treatment and be close to family for the birth of their first baby.

In early 2020 Sravanth returned to Melbourne to tie up loose ends before his daughter’s birth, but became trapped here when the Australian government closed the borders in response to the COVID-19 crisis.

“I spent about five months trying to get back to India, and I missed the birth of my daughter in May,” he said. In August he finally made it back to India at three times the normal cost of a ticket on a private charter flight.

After the ordeal of trying to get back to India, Sravanth is worried now he and his wife are embarking on another to get back to Australia to where they wish to raise their daughter.

“My daughter needs to start her life in Australia,” he said. “Everything is pretty unpredictable and we obviously don’t know what to do.”

Sravanth said he couldn’t understand why the reduction was necessary.

“A month ago the Australian governments were talking about how the quarantine facilities were all upgraded. That’s what they are made for,” he said.

“I’m not sure whether the same restrictions were put on the US when the outbreak was terrible there.”

He said living in Australia had given him a great appreciation for following health advice and said his family would happily comply with whatever measure would ensure they could come home.

“Being Australians we will be very careful, we know how to follow the safety rules,” he said.

“Even they could have in place a rule where we have to get vaccinated before boarding the flight, which we would do. So everything will be prepared to make sure there won’t be any outbreaks.”