What better way to entertain children at home than with an exclusive peek at David Walliams’ new children’s book, Slime – only in today’s Daily Mail. It’s the story of Ned, a little boy who has lived on the Isle of Mulch all his life, battling the adults who make the local children’s lives a misery.

And the worst one of all is the island’s owner, Aunt Greta Greed – but Ned has found a powerful weapon in his fight against the grown-ups: Slime.

It’s the perfect grungy ammunition, and Ned must learn how to harness its power. As this deliciously silly extract from Ned’s bathtime shows, yet again David Walliams has found the perfect formula to keep kids laughing out loud.

As all the different types of gunk swirled together, waves formed in the bath. 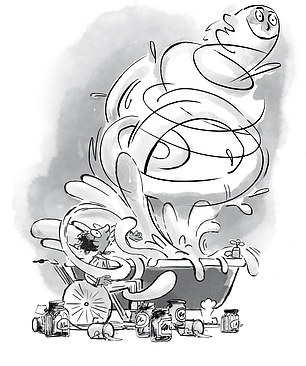 The waves swept up, up, up…

Ned turned round. It was a horrifying sight. He opened his mouth to scream, but no sound came out.

The bath was now a raging storm of gunk.

It splashed all over the bathroom, coating everything in gunk.

The sink, the toilet, even Ned – all were gunked!

Then, just as soon as the gunk had coated everything, it peeled itself off and whooshed back together.

Then the gunk began to take shape.

At first it became a giant egg. Like the kind of egg a dinosaur might have laid. The egg bounced up and down…

…before smashing itself against the bathroom wall.

The outer layer cracked like a shell as the gunk inside oozed out.

The oozing gunk then began to grow upwards and upwards, becoming a mountain.

No, it was a volcano!

It didn’t shoot lava up into the sky, but, rather, gunk!

It spurted itself all over the bathroom ceiling before oozing back down to the floor to become an elephant. ‘HOO!’ it hooted. 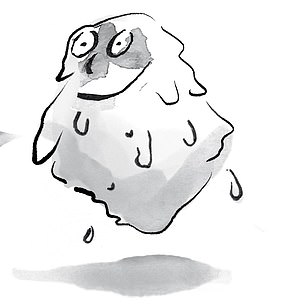 Then it became a shark!

This gunk monster was swimming and flying all at once.

The boy gazed open-mouthed in awe.

This was the greatest show on Earth!

And it was all for him!

Next the gunk monster exploded into thousands of pieces as it became fireworks.

What the boy had done that day changed the course of history. In mixing together a thousand different jars of gunk, Ned had created a brand-new matter.

The world would never be the same again.

As Ned stayed deadly still, the slime began spinning round and round him.

It was a tornado of slime.

NO! thought Ned. I am going to be slimed to death.

He shut his eyes tight, and cried, ‘ARGH!’

Then the most amazing thing happened.

The whirling tube of slime spun up over his head and slapped against the ceiling.

Then it began oozing downwards towards the boy. As it did, it began to take shape.

It is easier if I show you. It looked like this…

A blobby blobulous blob that was hanging down from the ceiling.

A huge, slimy upside-down face was staring straight back at him.

The boy’s eyes darted around the bathroom.

There was no one else there.

This thing was talking to him!

For something made of slime it had a surprisingly posh voice. As if it were royal. Which seemed highly unlikely. Last time I checked, the royal family did not have a member who was made entirely of slime.

‘Who are y-y-you?’ stammered Ned. The boy was trembling with fear.

‘I am anything you want me to be,’ replied the thing.

With that, the blob of slime squelched upside down across the ceiling.

Next, it made its way down the wall, its slimy bottom acting like a suction pad against it.

Eventually the thing was standing on the floor of the bathroom, peering down at Ned.

‘Like rubbing the lamp, and a genie coming out, and the genie giving you three wishes?’

The slime looked lost in thought for a moment before replying, ‘No. There is no lamp. I am not a genie. And there aren’t three wishes.’

‘There are infinite wishes!’

‘It’s infinite, so, yes, I suppose it is. Unless it was infinite and one, which would be silly.’

‘So, boy, what do you wish me to be? I can be anything and everything! A hippopotamus! A swarm of bees! A giant pair of bloomers!’

As it spoke, it shapeshifted into each thing. ‘Just think of something beginning with S! A sailing ship. 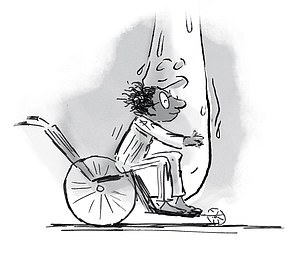 A sausage as tall as a tree. A steamroller…’

The boy looked on in wonder as it changed with dizzying speed.

With that, there was the sound of a huge drum being struck.

The slime shattered into what seemed like hundreds of tiny globules. They flew past Ned, and he realised that these weren’t just globules.

They were musical notes! As the sound of a symphony echoed around the bathroom, these musical notes danced through the air like butterflies. The boy watched in awe as they swooped and twirled in time to the music.

Then, just as soon as the symphony ended, the globules all merged together. This time they didn’t go back into being Slime’s blobulous self.

Oh no. The globules merged back into the shape of a whale. The whale was so humongous it filled up the entire bathroom.

It floated in the air, swishing its tail.

‘Am I back to normal?’ it asked. ‘Something feels fishy.’

‘No! You are not back to normal!’ exclaimed Ned. ‘Unless it is normal for you to be a great big ginormous whale!’

The whale of slime looked down, and then fell through the air.

It landed like dropped jelly on the bathroom floor.

Ned stared at it. Whatever this thing was, it looked to be no more.

It was an ex-thing. Lying motionless next to the wheels of the boy’s wheelchair was nothing more than a puddle of gloop.

‘Slime!’ called out Ned. He couldn’t think what else to call it, and ‘Slime’ seemed appropriate. ‘Are you all right?’

After a moment, the slime poured itself back together into the shape of a blob.

‘Erm, Roger? Archibald? Brenda?’ offered Slime. ‘I do feel like a Brenda.’

‘Slime’ it is!’ said Slime. It gave the boy a funny look, as much as a blob of slime can give anyone a funny look. ‘So, did you create me?’ 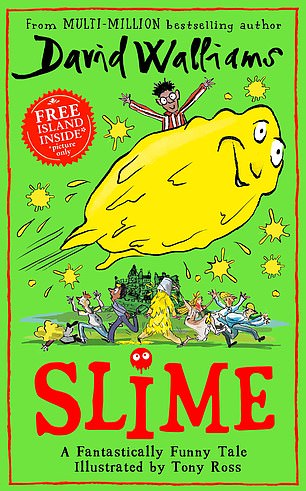 ‘I guess we are… well –’ Ned didn’t dare say it at first, but something in his heart told him he should – friends.’

‘Friends,’ repeated Slime. ‘Friends! I like that! Yes! We are friends!’

The boy smiled and leaned over to hug his new friend, but all he got was a face full of slime.

‘You didn’t tell me your name,’ remarked Slime.

‘I have a friend called Ned!’ exclaimed Slime.

‘I want you to help me play a trick…’

‘…on someone who has played a million tricks on me!’

Just then there was a pounding on the door.

‘What on earth is going on in there?’ a voice demanded. It was, of course, Jemima. ‘Come out right now, Ned! Or I will boot this door down!’

‘Is that them, perchance?’ enquired Slime.

‘Now, how did you guess?’ replied the boy with a cheeky smile. 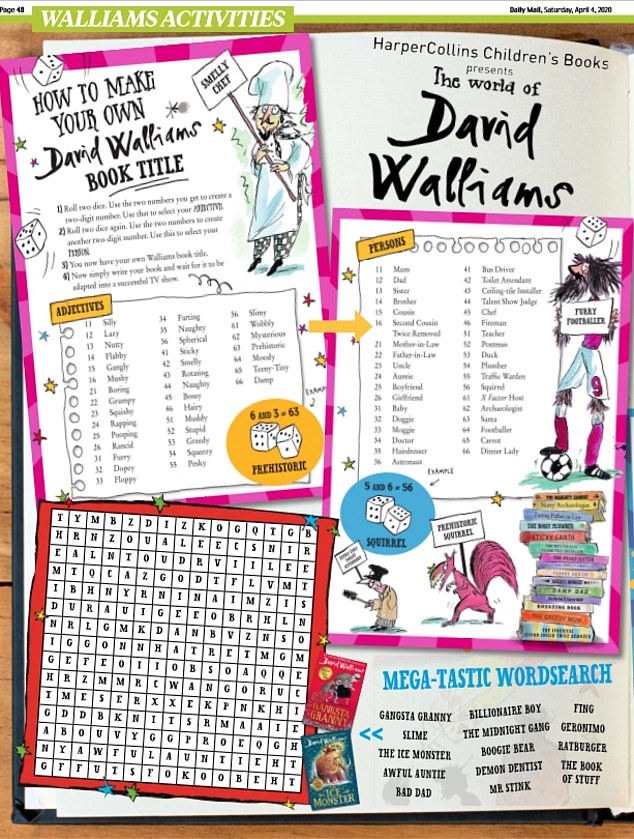 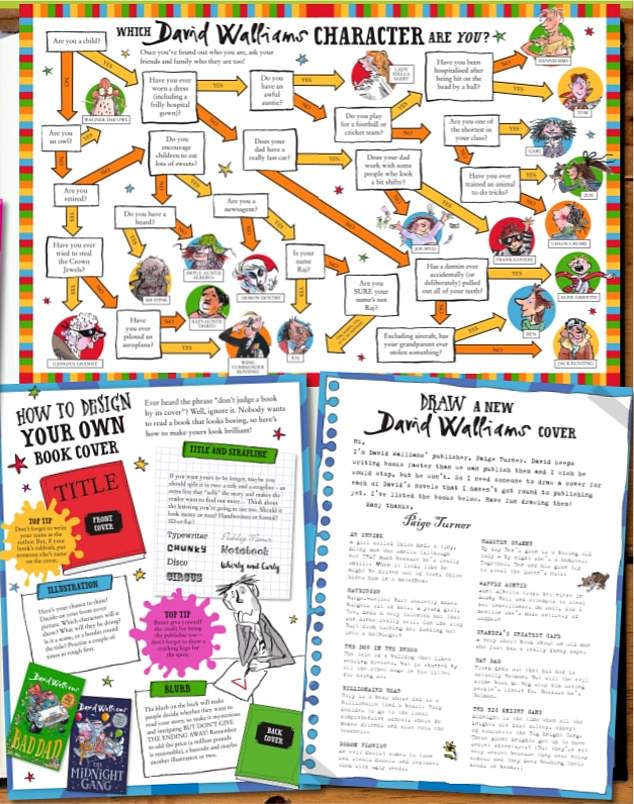