Jailed and branded a terrorist… for fighting ISIS: Ex-British Army soldier who was so outraged by Manchester Arena bombing he went to Syria is free after eight months in Wandsworth Prison – and his story could be the plot of a movie thriller

On the front line: Daniel Burke on patrol while battling ISIS in Syria

After three days of almost non-stop combat, former British Army soldier Daniel Burke was crouching behind a rooftop parapet in a town near the Iraq-Syria border. He was surrounded by ISIS fighters.

‘We’d run out of water and we were running out of ammunition,’ he recalls.

‘We put in a call for an air strike and a Hummer [Humvee armoured vehicle] to take us out but were told, ‘We can’t get to you.’

‘They said we should each keep one round of ammunition and put it in a top pocket, so if need be, we could take our own lives. One of my four mates asked me, ‘Please, if it comes to that, shoot me in the back of the head.’ ‘

Daniel, 33, is recounting his closest brush with death during the year that he volunteered to risk his life by fighting ISIS in Syria.

He says he managed to locate the jihadi sniper.

‘But he had spotted me first. He fired at me and the bullet hit the side of my helmet. I reeled backwards. I thought I’d been hit in the face.’

Miraculously, he survived – but only to face another ordeal after returning to Britain: charges of supporting terrorism and a possible life sentence, having been found trying to give humanitarian aid to his Syrian friends who were under attack by Turkey.

On Friday, though, all charges were dropped and now Daniel is telling his remarkable story exclusively to The Mail on Sunday.

By any normal definition, he is a hero. Having served with the Paras in Afghanistan, he volunteered to go to Syria on the day after the 2017 Manchester Arena bombing that killed 22 concert-goers, having been appalled at the carnage wrought by jihadis in his home city.

While in Syria, fighting with the Kurd-led Syrian Democratic Forces, he sent British counter-terrorist police a stream of intelligence material that he and his comrades had found and copied when they overran houses abandoned by the terrorists. He believes the information may have helped thwart further terror attacks.

After spending the last eight months in Wandsworth Prison on remand, the Crown Prosecution Service (CPS) concluded last week that ‘no reasonable jury’ would convict him. 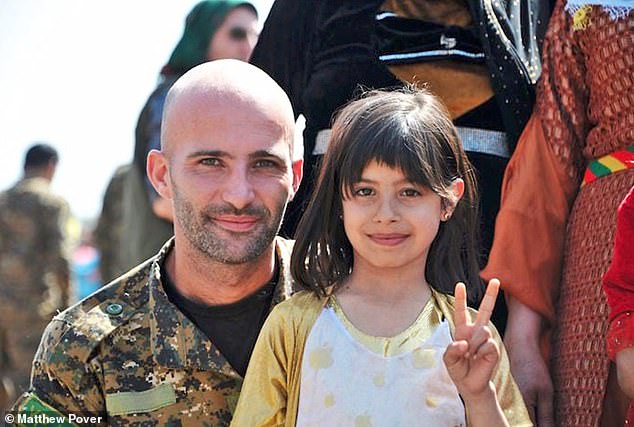 Mission: Daniel Burke poses with one of the local children while in Syria

Speaking in a soft Mancunian burr, he says the case was a ‘travesty’ – the result, he believes, of realpolitik. He says the Turkish government, whose invasion of the northern part of Syria’s Kurdish enclave has led to countless civilian deaths and created more than 600,000 refugees, has to be ‘appeased’ by fellow Nato member countries in the interests of a future trade deal.

Being accused of terrorism, Daniel says, hurt badly, considering that he had fought so hard against ISIS. At the time of his arrest, he told police: ‘I’m not a terrorist. You know I’m not a terrorist. I’ve done nothing but fight for this country. This is a f****** joke.’

Daniel is from a close-knit family in Wythenshawe. His dad is a retired taxi driver, his mother an optician’s assistant, and he has two brothers. He joined the Paras’ 3rd Battalion on leaving school in 2007.

Soon he was deployed to Afghanistan, serving with a mobile unit, mostly in Helmand, where for the first time he experienced the loss of a friend, who was killed by an explosive device.

Harder to take, Daniel says, was the impact of war on civilians. He describes seeing a little girl who was orphaned after her family had been killed.

Back home, he suffered post-traumatic stress disorder, got into a fight and began drinking heavily. In July 2009, he was discharged from the Army.

For the next eight years he did a series of different jobs. But after ISIS established its murderous caliphate in 2014, he began to think about going to Syria, taking an increasing interest in Kurdish rebels who he thought were fighting the jihadis most effectively. The Manchester Arena bombing was the catalyst.

At first, he considered going to Libya – the birthplace of the concert bomber. But ISIS had claimed responsibility for the attack and Syria was its heartland. So, the next day, Daniel filled out an online form to join the Kurdish militia.

He received a reply and was told to book a flight to Sulaymaniyah, in the Kurdish part of Iraq.

He got there by a circuitous route – via Mykonos, Athens, Amman and Cairo and was told to call a WhatsApp number to arrange a pick-up.

Daniel recalls: ‘There were two cars waiting and the first one had three guys in it. When one came over, I thought, ‘S***, this is a kidnap.’ ‘ But instead Daniel was taken to a safe house.

After waiting there for a month, he was joined by two others Britons – Dan Newey and Oliver Hall.

‘We set off next day in a 4×4, off-road up the Tigris – a very bumpy ride. At the end, we had a two kilometre walk in the middle of the night to a crossing point to Syria where there was a little inflatable raft that we had to pump up.

‘There were 30 of us, including seven Westerners.’

They spent the next month at a Kurdish military academy getting used to weapons systems, learning the local culture and language.

‘We were taught how to kill and gut our own food – goats and chickens.

‘When we left, we split into different groups – what the Kurds call tabors, or platoons. Usually I’d spend one or two weeks on the front line, then rotate out.’

During the latter part of 2017, Daniel fought in and around Deir Ezzor, one of ISIS’s last strongholds, where the enemy included jihadis fleeing Raqqa, the caliphate’s capital.

Afterwards, against Daniel’s advice, fellow Briton Oliver, 24, volunteered to go to Raqqa to clear mines. There, he and another Briton, Jac Holmes, were killed.

The battle of Deir Ezzor was, he says, ‘tough, house-to-house fighting, clearing every home occupied by ISIS. A lot of ISIS members were taking drugs to help them fight – amphetamines and steroids.’

In some houses, the Kurdish militia found caches of documents showing that ISIS was getting people to apply for jobs in factories and oil refineries in the West – presumably to work as terrorist-saboteurs.

Daniel says: ‘I started photographing the documents on my phone and sending them to the Manchester Counter-Terrorism Unit. In total, there were hundreds of pages.’

In the New Year, says Daniel, as the front line shifted to the city of Hajin, ‘things got very intense. We were fighting from door to door. There were a lot of dead bodies strewn around the streets. You’d see cars blowing up, flying through the air like little toys.’

One blast caught him standing near a wall and he slammed into it, head-first: ‘That was the first time I’d been knocked unconscious. Unfortunately, I hadn’t done up my helmet strap.’

Meanwhile, as America stepped up its assistance against the Syrian regime, Daniel says he heard US drones overhead, ‘coming in, one after another’.

The day he was almost killed on the rooftop in Hajin, when the bullet hit his helmet, had followed six weeks fighting on the front line. ‘We’d had no food for two days and we were running low on water. I’ve never felt so far from home,’ he confesses.

Finally, Daniel’s rooftop ‘hell-hole’ was relieved and he was allowed some rest at the Kurdish stronghold of Al Hasakah. However, he almost died again – not from fighting, but sepsis. During the battle, a metal splinter had got inside a finger joint and he needed several courses of antibiotics.

More front line trips followed. As well as secret ISIS documents, he found seven computer hard drives. It was at this point that the Kurds’ suspicions were aroused and he says he was ‘accused of being a British spy and interrogated’.

‘I told them, ‘This stuff could make a difference’. They wanted to know why I had the hard drives and I explained that if you went into a house where the last thing they’d done was try to destroy a laptop, it was reasonable to assume they had something to hide. After a couple of weeks, they said, ‘Give the stuff to us in future, and we’ll make sure we get it back to the Brits.’ ‘

There were a few more spells on the front line but Daniel had become exhausted – despairing over so many deaths – and was told it was time to go home.

‘I was sent back as a VIP – a flight to Amman and then to Barcelona. I spent a few weeks climbing in the Pyrenees. Finally, my dad and my brother came over. 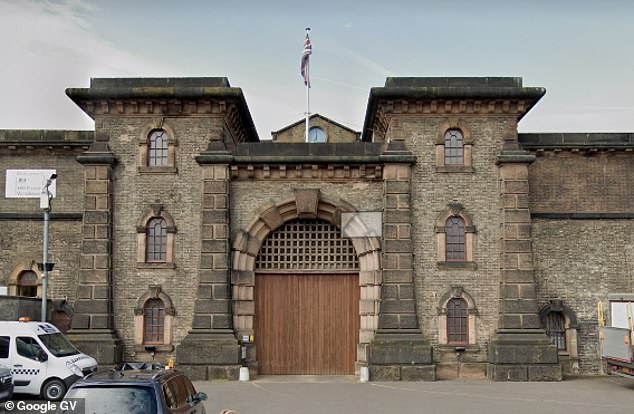 After two weeks of being questioned, he was charged with terrorism offences and remanded to Wandsworth Prison

‘I told the Manchester Counter-Terrorism Unit I was coming home. But when I got to Calais in August 2018, I was arrested.’

However, he was released after just a few days and went back to working in the concrete business. But he missed his Kurdish co-fighters.

He says: ‘We kept in touch and they were like family. I believe in what they’re doing – treating women equally, and trying to bring in freedom and democracy – things the Middle East badly needs.’

Last year, the geopolitical wheels turned and President Trump withdrew his support for the Kurds.

As Turkey – long impatient with its Kurdish minority – invaded, pledging to create a buffer zone on its border, Daniel watched in horror as Kurdish fighters, including women, were slaughtered and their bodies mutilated, while towns and villages were razed.

Realising he could not return to the area and fight against Turkey because it is a Nato member, he contacted Shadows Of Hope, a US humanitarian organisation that works in conflict zones.

He made no firm pledge to help them. Meanwhile, he had bought a plot of land near Barcelona, planning to turn it into a rehabilitation centre for victims of post-traumatic stress disorder.

He set off there with his then girlfriend but they only got as far as Folkestone when they were arrested last December.

After two weeks of being questioned, he was charged with terrorism offences and remanded to Wandsworth Prison.

‘It was a culture shock. Most people there seemed to be gangsters. At first, I lied about why I was there. If I’d said I was in for terrorism offences, the Muslims would have assumed I was a neo-Nazi; the skinheads, that I was jihadi.’

Just six weeks ago, at a pre-trial hearing, he was refused bail as he was told the case against him was ‘strong and compelling’. But then, last Monday, came notification of the dropping of the charges.

What could have made the prosecution suddenly decide that their case was so weak? Could someone have realised that he had always been on the side of the good guys and had sent useful intelligence back to counter-terrorism police?

At Friday’s hearing, no reasons were given. But a determining factor may have been a document submitted by the head of Daniel’s defence team, Andrew Hall QC, arguing that for a fair trial, the CPS must disclose details of the Government’s dealings with Turkey, and whether the decision to prosecute him had anything to do with a political decision to improve diplomatic and trade links.

Whatever the answer, Britain’s failure to challenge Turkey’s war against the Kurds leaves Daniel Burke dismayed.

‘I don’t know why the West is letting them get away with it,’ he says. ‘They’re using ex-Al Qaeda and ISIS as proxy fighters, while in the north, the caliphate is back.

‘After we worked so hard, and lost so many in the fight against IS, it’s tough to take.’