The lead singer of Eurovision winners Maneskin will be taking a drugs test after speculation from viewers that he took cocaine on live TV, it has been confirmed.

Damiano David was seen during Saturday night’s Eurovision Song Contest bending down towards a table in what was interpreted by observers as a snorting movement.

But Damiano has refuted the idea that he had taken cocaine during the final, saying Thomas Raggi, the band’s guitarist, had simply broken a glass in the green room.

And the Italian singer will be taking a voluntary drugs test after returning to Italy from Rotterdam to prove it, according to a statement from Eurovision organisers.

Last night, Maneskin took to social media to address the rumours, openly offering to ‘get [drugs] tested’ as they said they had ‘nothing to hide’.

Damiano David (second left), the lead singer of Maneskin will be taking a voluntary drugs test after speculation from viewers that he was taking cocaine during the Eurovision live final

In a statement on Sunday, The European Broadcasting Union said Damiano will be taking a drugs test after returning home and confirmed that broken glass had been found in the green room.

It read: ‘We are aware of the speculation surrounding the video clip of the Italian winners of the Eurovision Song Contest in the Green Room last night.

‘The band have strongly refuted the allegations of drug use and the singer in question will take a voluntary drug test after arriving home.

‘This was requested by them last night but could not be immediately organized by the EBU.

‘The band, their management and head of delegation have informed us that no drugs were present in the Green Room and explained that a glass was broken at their table and it was being cleared by the singer.

‘The EBU can confirm broken glass was found after an on site check. We are still looking at footage carefully and will update with further information in due course.’

The statement comes after the Eurovision winners took to Instagram stories to address the video of Damiano, insisting that they have ‘never used cocaine’ and were ‘shocked’ by the rumours.

The post continued: ‘We are really shocked about what some people are saying about Damiano doing drugs. 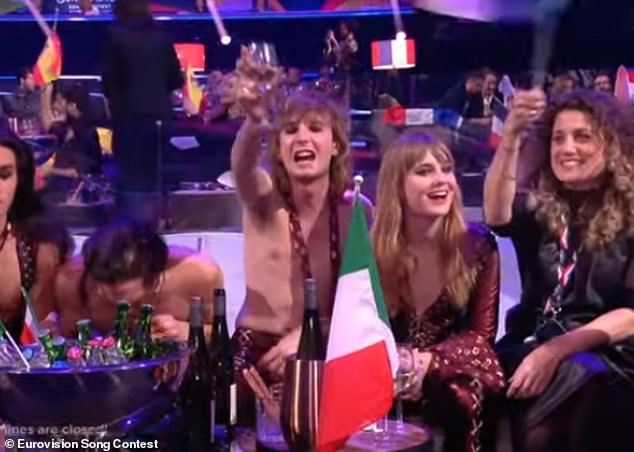 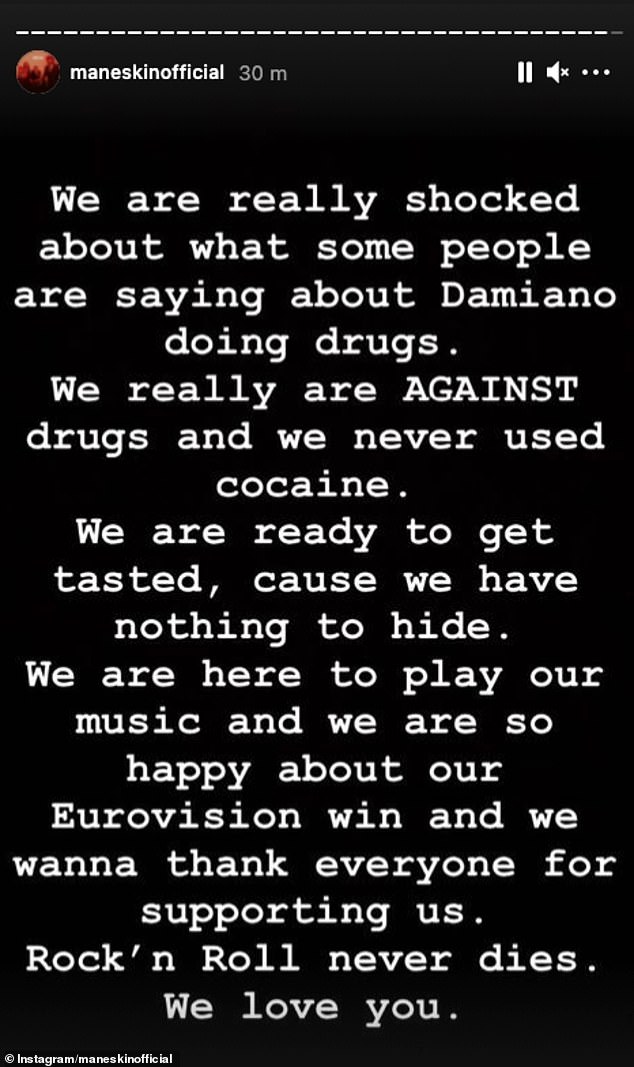 Last night, The Eurovision winners took to social media to address the rumours, openly offering to ‘get [drugs] tested’ as they said they had ‘nothing to hide’

‘We really are AGAINST drugs and we never used cocaine. We are ready to get tested, cause we have nothing to hide.

‘We are here to play our music and we are so happy about our Eurovision win and we wanna thank everyone for supporting us.

When asked about the incident during a press conference, Damiano said: ‘Thomas (guitarist Thomas Raggi) broke a glass … I don’t use drugs, please guys, do not say that.

‘Don’t say that really. No cocaine please, do not say that.’

This year’s Eurovision Song Contest saw Maneskin secure victory for Italy while Britain’s entry James Newman received zero points from both the European public and professional juries across the continent.

Some 7.4 million people in the UK tuned into BBC One to watch James Newman disappointingly score zero points in the final of the Eurovision Song Contest, giving  the channel a 48.5 per cent share of the audience.

It was a disappointing night for the British hopeful, who was the only contestant to scored zero points from the jury vote and from the public vote, coming bottom on the leaderboard.

While some UK fans blamed Brexit for the poor showing, Australia, who were also part of the competition gave Britain zero points.

Maneskin’s win was only Italy’s third victory in the immensely popular contest and the first since Toto Cutugno took the honor in 1990.

The music festival was cancelled last year amid the pandemic but this year’s event in Rotterdam’s Ahoy arena with its regime of testing and strict hygiene protocols was seen as a step toward a post-COVID-19 return to live entertainment.

‘We think that the whole event was a relief. We think that we were really thankful … to have had the chance to be part of this huge event,’ Maneskin lead singer Damiano David said.

‘This Eurovision means a lot, I think, to the whole of Europe. It’s going to be a lighthouse. So thank you, everybody. Really,’ he added. 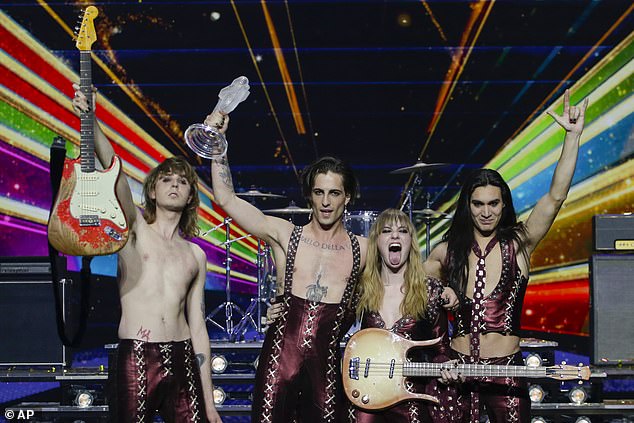 Damiano (pictured centre) has refuted the idea that he was taking cocaine, claiming the guitarist of the band Thomas Raggi (left) had simply broken a glass in the green room 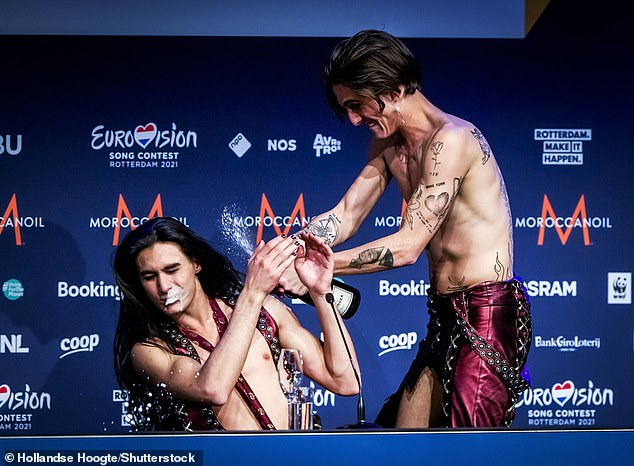 On stage after the band’s victory, Maneskin frontman Damiano David shouted into the microphone: ‘We just wanted to say to the whole of Europe, to the whole world, rock and roll never dies.’

Italy, the bookmakers’ favorite, trailed Switzerland, France and Malta after the national juries delivered their votes but were propelled to victory by votes from the viewing public.

‘The audience is the most important thing, of course,’ said bassist Victoria De Angelis.

‘So the fact that so many people vote for us, it’s the most meaningful, because that means that those people are coming to our gigs, they are listening to our music. And this has much more value than a jury’

A crowd of 3,500 fans, who all tested negative for the coronavirus, watched the finalists perform live.

Maneskin is Danish for moonlight, a tribute to De Angelis’ home country. The band, which honed its musical style busking in Rome, won with a total of 529 points from second-placed France. Switzerland, which led after national juries had voted, finished third.

United Kingdom singer James Newman’s song, ‘Embers,’ failed to ignite any love at all and did not score a single point, finishing last, just as the U.K. did at the previous Eurovision two years ago.

U.S. rapper Flo Rida didn’t manage to translate his star power into points for tiny San Marino’s entry that was sung by Senhit. They finished with just 50 points.

For lovers of kitsch, German singer Jendrik played a sparkling ukulele and danced with a woman dressed in a giant hand costume optimistically showing the victory sign. He finished close to last.

Pravi’s song. ‘Voila,’ was a restrained ballad that built to a swirling crescendo on a largely darkened stage, but there was still plenty of the over-the-top spectacle that has become Eurovision’s trademark. 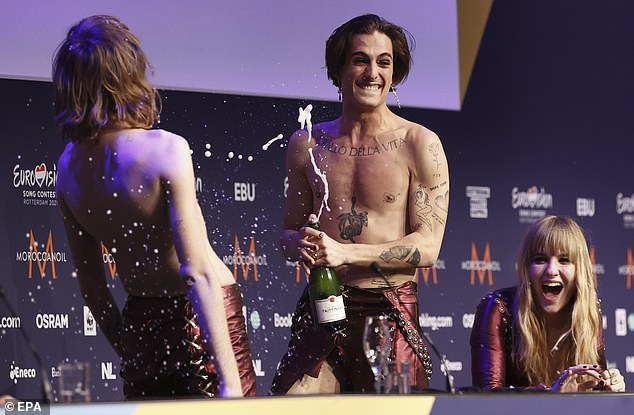 After the band’s victory, Maneskin frontman Damiano David said on stage: ‘We just wanted to say to the whole of Europe, to the whole world, rock and roll never dies’

Norwegian singer Andreas Haukeland, whose stage name TIX is a reference to growing up with Tourette syndrome, sang ‘Fallen Angel’ in a pair of giant white wings while chained to four prancing devils.

At the other end of the spectrum – Finland’s hard-rocking Blind Channel played their song ‘Dark Side’ amid bursts of pyrotechnics and Ukraine’s Go-A performed surrounded by skeletal white trees.

Ahead of the show, crowds gathered outside the arena in the Dutch city of Rotterdam. Drag queens mingled with families as a man in a gold suit waited to get into the venue.

Milo Mateo and Carlo Sossa, wearing matching sequin-covered hats and draped in Italian flags, came from Italy for the show and were hoping for a Maneskin victory since that would bring next year’s contest to Italy.

‘If we win, it will be very, very nice, because the next year will be in Italy. That’s very good. Let’s hope. Fingers crossed,’ Mateo said as he waited to get into the arena.

The popular Icelandic band Dadi og Gagnamagnid, known for its kitsch dance moves and green leisurewear costumes, could not perform live because one member tested positive for the virus earlier in the week. Instead, viewers saw a recording of one of the band’s dress rehearsals.

‘The point was to go and actually experience how it was to compete in Eurovision, and that’s just really not happening,’ lead singer Dadi Freyr said from isolation in Rotterdam.

Maneskin lead singer David said the victory was a vindication of the band’s career trajectory that started with them busking on the streets of Rome.

Nearly A Third Of People Think Jennifer Aniston Should Date This Celeb
Nicole Kidman looks ethereal in a lavender dress we want in our closets too
Popular News
Why does Tom Cruise do his own stunts? ‘No one asked Gene Kelly, ‘Why do you dance?’’
18/05/2022
Man Utd wonderkid Ramon Calliste, called ‘the next Giggs’, now owns luxury watch business and makes £5m a year – The Sun
26/03/2020
Megan Thee Stallion Addresses Criticism Over Twerking: ‘I Love to Shake My A**’
26/03/2020
Police guard shops to stop coronavirus panic-buyers and enforce social distancing – The Sun
26/03/2020
Coronavirus: Good Morning Britain’s Dr Hilary reveals ‘game-changing’ self-testing kit
26/03/2020
Recent Posts