Moscow: A doctor who gave Russian President Vladimir Putin a tour of Moscow's main coronavirus hospital last week said on Tuesday he had himself been diagnosed with the virus. 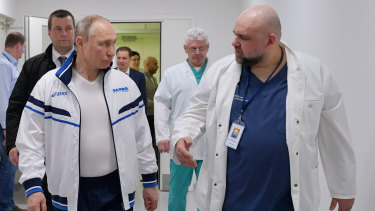 Russian President Vladimir Putin and the Kommunarka hospital’s chief Denis Protsenko, right, walk in to the hospital for coronavirus patients on March 23.Credit:AP

Putin visited the Kommunarka hospital last Tuesday where he chatted to the doctor, Denis Protsenko. Neither man was wearing protective equipment during their conversation, TV footage from the visit showed.

Protsenko, writing on Facebook said: "Yes, I have tested positive for coronavirus, but I feel pretty good. I've isolated myself in my office. I think the immunity I've developed this month is doing its job."

The Kremlin said that Putin was being regularly tested for coronavirus and that "everything is okay," the RIA news agency reported.

It has previously said that Putin is being protected from viruses and other illnesses "around the clock". 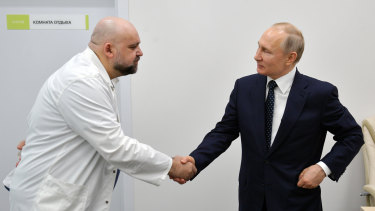 Putin donned a hazmat suit and a respirator during his visit to the hospital last week when dropping in on patients. But he did not have his protective gear on during a meeting with Protsenko, with whom he was photographed shaking hands.

The Kremlin reported a coronavirus case in Putin's administration on Friday, but said the person in question had not come into contact with the president and that all measures were being taken to prevent the virus from spreading further.

Russian lawmakers on Tuesday granted the government powers to declare a national emergency over the coronavirus, and approved penalties for violations of lockdown rules including, in extreme cases, jail terms of up to seven years.

In a related move, Putin has offered US President Donald Trump help with medical equipment amid the spread of the coronavirus, the Interfax news agency reported on Tuesday, citing the Kremlin spokesman Dmitry Peskov.

Trump accepted the proposal, according to Peskov as quoted by Interfax. Putin made the proposal in a phone conversation with Trump on Monday.

A Russian plane with medical equipment may leave for the United States on Tuesday, Interfax quoted Peskov as saying.

"It is important to note that when offering assistance to the US colleagues, the president (Putin) assumes that when US manufacturers of medical equipment and materials gain momentum, they will also be able to reciprocate if necessary," Peskov added.