Disney might require visitors to their theme parks to have their temperatures checked when they reopen after coronavirus restrictions on public gatherings are lifted.

The company is considering the idea as one way to make the public feel safe about returning to Disney’s parks once they are allowed to open again for business.

‘One of the things that we’re discussing already is that in order to return to some semblance of normal, people will have to feel comfortable that they´re safe,’ Executive Chairman Bob Iger said in an interview published on Tuesday. 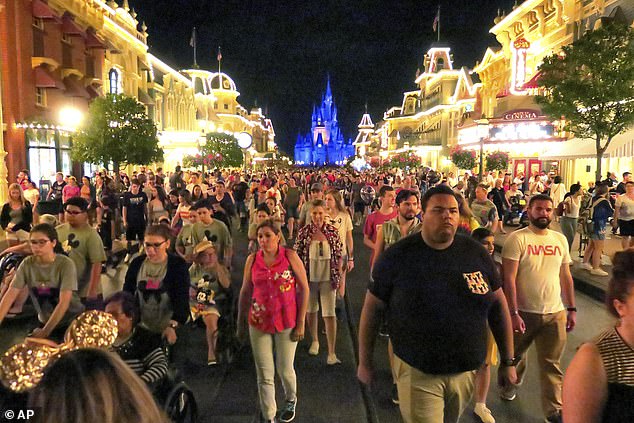 Guests leave the Magic Kingdom at Walt Disney World in the final minutes before the park closed for the final time on March 15. No opening date has been set as to when it will reopen 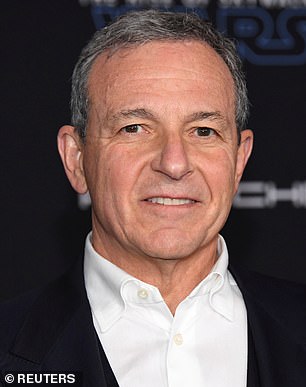 ‘I don’t think we’re ever going to see a return to business as usual in the sense that, I can’t speak for all companies, but Disney will take this opportunity to look for ways to run our businesses more efficiently when we come back,’ Chairman Bob Iger said

‘Some of that could come in the form ultimately of a vaccine, but in the absence of that it could come from basically, more scrutiny, more restrictions.’

‘Just as we now do bag checks for everybody that goes into our parks, it could be that at some point we add a component of that that takes people´s temperatures, as a for-instance,’ Iger said to Barons.

Disney operates Walt Disney World in Florida and Disneyland in California as well as theme parks in China, Hong Kong, Japan and France. All are currently closed to help reduce the spread of the novel coronavirus. The company has not said when they will re-open.

Walt Disney World, the most-visited theme park in the world, attracted 58.4 million visitors in 2018, according to the Themed Entertainment Association.

In China, ‘you can´t get on a bus or a subway or a train or enter a high-rise building there, and I´m sure this will be the case when their schools reopen, without having your temperature taken,’ Iger said.

‘So we’ve asked ourselves the question, let’s prepare for a world where our customers demand that we scrutinize everybody. Even if it creates a little bit of hardship, like it takes a little bit longer for people to get in. Just as the case after 9/11 where people ultimately lived with the notion that in order for them to enter a building, if you’re in an office building you have to show a picture ID or get your picture taken and be screened. Or in order to enter a park you have to put your bags out there to be checked and you go through some kind of metal detector. Or certainly what’s going on in airports with the TSA. 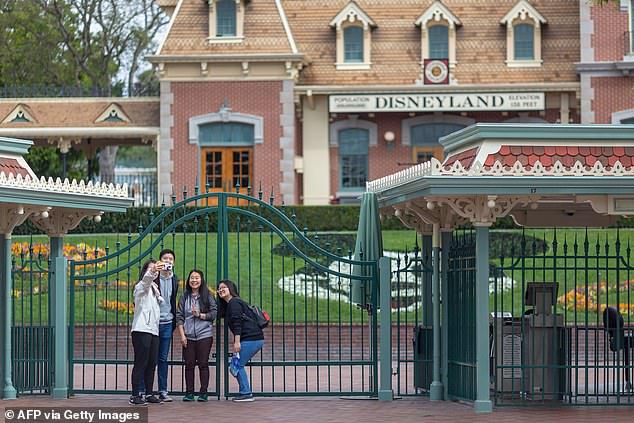 People stand outside the gates of Disneyland Park on the first day of the closure of Disneyland and Disney California Adventure theme park, pictured in March

‘I don’t think we’re ever going to see a return to business as usual in the sense that, I can’t speak for all companies, but Disney will take this opportunity to look for ways to run our businesses more efficiently when we come back,’ he said.

Disney is continuing to paying hourly parks and resorts cast members through April 18.

Last week, the company announced furloughs for all employees ‘whose jobs aren’t necessary at this time’ starting April 19, starting with the theme parks.

At the top of the chain, Iger will forgo his entire multi-million dollar salary and other top executives will also take pay cuts amid the pandemic. 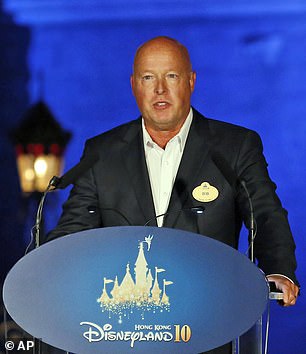 Iger, 69, will waive his entire salary after raking in a staggering $47.5million in the last fiscal year. In the 2018 fiscal year, Iger made $65.8million.

His base salary is $3million, but a cash bonus and stock awards helped raise his financial takeaways.

Chapek will take a 50 percent pay cut per his memo. His base salary is $2.5million, with an annual target bonus of $7.5million and an annual long-term incentive grant of $15million.

‘This temporary action will remain in effect until we foresee a substantive recovery in our business,’ he added.