First the lockdown… then the RATS! Torn open trash lines the streets after first week of isolation as up to a third of UK bin men are off sick, collections are reduced while one council tells locals to put waste in the SHED

Streets up and down Britain are littered with rubbish just one week into lockdown, with bin men off sick, waste collections scaled back and families unable to eat all the food they stockpiled.

Several local authorities have stopped collecting food and garden waste because so many bin men are self-isolating.

Residents are being told to put everything in the same bins, with one council even asking families to store uncollected rubbish in their garden sheds.

But with Britons still panic-buying food, drink and toilet paper, thousands of bins have been left overflowing with  trash leaking out onto the streets.

Families now fear it could result in a vermin problem, as bin bags mount up outside their front doors.

Refuse workers are under huge pressure to pick up panic buyers’ excess waste and have spoken of their fears of catching the deadly virus due to a lack of protective gear. 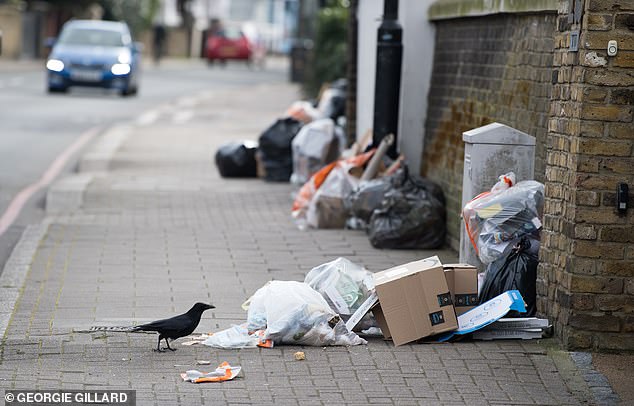 A street in Putney, south west London, is pictured with rubbish bags leaking outside people’s homes today after residents bought more food than they could eat 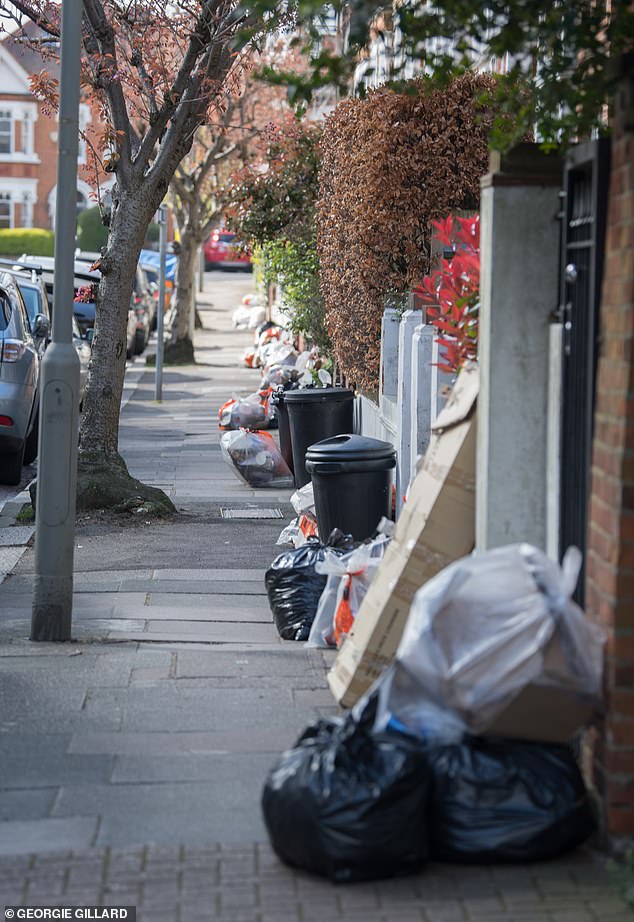 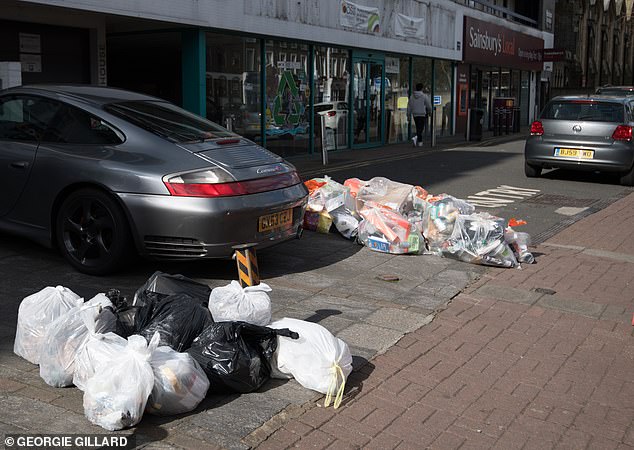 Another street in Putney, south west London, is pictured covered in excess rubbish amid nationwide stockpiling and waste collection cuts

Today streets across Putney, south west London, were seen with dozens of rubbish bags outside each home after residents failed to consume all the food they bought.

Wandsworth Council told MailOnline its rubbish collection has not been scaled back and the bin bags were out to be collected as usual, but more rubbish is being thrown out due to more people being at home.

Yesterday bins in nearby Shepherds Bush were spotted overflowing with unusually large amounts of rubbish.

Among councils making cut backs is Rotherham City Council, which has suspended brown bin collections for food waste for the next six weeks after revealing a third of its workforce were at home.

Bin collections could be ‘significantly disrupted’ in the coming weeks if more and more rubbish collectors are forced to self-isolate, one council has warned.

West Berkshire Council has expressed concerns they will not have enough refuse workers as more cases of the virus are reported in the area.

Bosses have said if enough employees have to self-isolate because they or their families develop symptoms, they may not be able to collect everyone’s rubbish.

But Councillor Steve Ardagh-Walter, lead for environment, told Berkshire Live: ‘I appreciate that waste collections are a much valued service, so please be assured that we are engaging regularly with our contractor to keep collections going as best we can.’

Further reductions in waste collection could come ‘with or without advance notice’, a council spokesman added.

The council has asked people to reduce the amount of rubbish.

If people continue to throw out so much rubbish, it could ‘overwhelm our already stretched collection systems and lead to significant services disruption’, a council spokesman said.

Bin lorries may come round earlier than normal, so people should leave bins out the night before or by 6am on the day they are collected.

Local authorities in Milton Keynes and Stockport are also no longer collecting green bins for cut flowers and garden waste, with residents urged to use their own compost heaps.

All glass collections have been suspended in Stirling, while in Dorset street and dog waste bins will be emptied less often to prioritise household collections.

Meanwhile, Brighton and Hove Council left residents furious after authorities told them to dispose of their own rubbish because bin collections had been missed ‘because of coronavirus’.

They have urged residents to cut down on waste if possible and store it in their garden sheds if necessary.

One bin man, from the East Midlands, told The Daily Star about his coronavirus concerns: ‘The biggest problem we’ve had is social distancing – trying to keep two metres apart.

‘When you’re a bin man you tend to sit in the wagon with three guys, so ­obviously you can’t have a two- metre gap.’ He also complained that a request for face masks had been rejected.

Another waste collector described the difficulty of facing mountains of extra rubbish.

‘Our problem is the public at home, online shopping and panic buying,’ he said. ‘With staff shortages and extra waste we are very stretched.’

Homeowners could be vulnerable to a number of pest-related problems if rubbish is left out, including ant infestations and a bacterial infection called Weil’s disease.

Mice in the UK have also been known to carry a new US-born virus called hantavirus that has killed at least one person in China.

People who catch the virus can suffer a fever and even internal bleeding and organ damage.

Stuart Richards, from the GMB Union who represents binmen and women across the country said: ‘The picture is changing every day, but we are seeing a significant number of our members not being able to come into work (either through shielding, self-isolation or actual sickness). 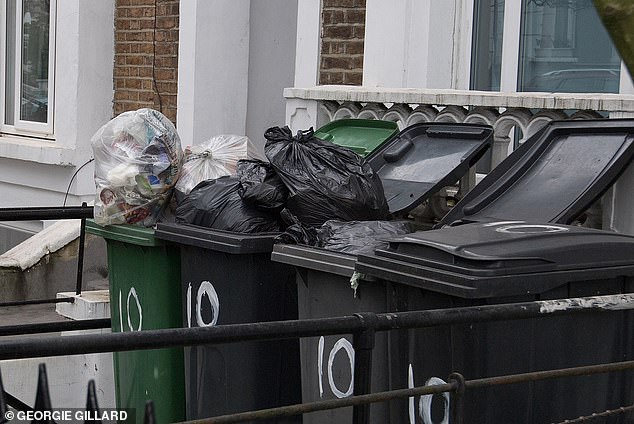 A row of bins in Shepherds Bush, west London, are pictured overflowing yesterday 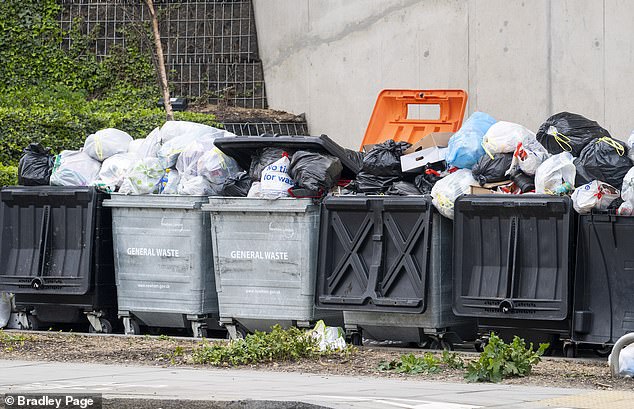 Panic-buying and an increase in waste from home deliveries has also led to more waste being thrown out. Pictured: Bins overflowing in the Docklands, east London yesterday

‘However, up to the end of last week, it seemed that the majority of councils and contractors have been able to continue without massive disruption.

‘Continuing staff absences and revised working practices to try and ensure safety (smaller crews, etc) are having an impact, though, and this is likely to have a cumulative effect over time.

‘From our perspective, GMB members are doing an amazing job and continuing to deliver vital front line services.’

Mr Richards said he was not aware of any domestic waste rounds being reduced yet.

‘The madness continues’: Social media users slam ‘wasteful’ panic-buyers who are still throwing away perfectly good food after stockpiling more than they can consume

By Jemma Carr for MailOnline

Stockpilers are continuing to throw away food after hoarding more than they can consume due to coronavirus panic buying.

Pictures of bins piled high with vegetables, fruit and bread were shared to social media after just one week of a nationwide lockdown.

And over the weekend, loaves of bread, bunches of bananas and unopened packs of chicken products were tossed aside after they went past their use by date. 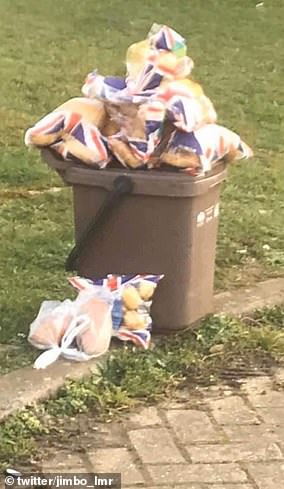 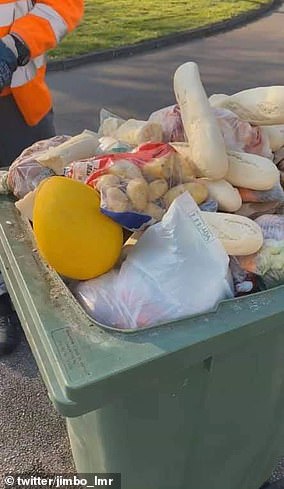 Unopened tins of food and packets of pasta filled a black bin in Bury, Greater Manchester.

A picture of the bin was shared to Twitter, prompting social media users to slam the panic buyers as ‘disgraceful’.

Panic about the killer bug prompted Britons to flock to supermarkets over the last few weeks to stock up on basic, long-lasting food.

Since then, strict lockdown rules were introduced, instructing Britons to only leave the house once a day and to shop only for essentials. 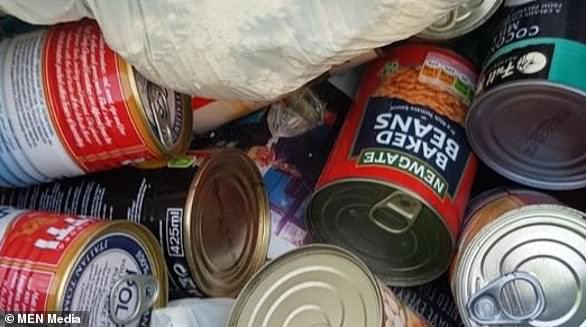 Stockpilers are throwing away perfectly-good food after hoarding more than they can consume due to coronavirus panic buying in Bury, Greater Manchester

Donna Ball, the executive director of operations at Bury council, shared a picture of a full bin to social media today prompting outrage.

She wrote: ‘The madness continues, if you are throwing perfectly good food in the bin that could support your food banks then give your head a bloody wobble!

‘Binmen daily seeing good food thrown in black bins. This had bags of pasta underneath also.’

Maggie Kufeldt replied: ‘Goodness – who are these people? My blood is boiling!’

Col Barlow wrote: ‘Ok why would anyone throw away unopened tins of food, there’s over half a dozen in view.’

John Currie added: ‘WTF is wrong with people in this country?’ 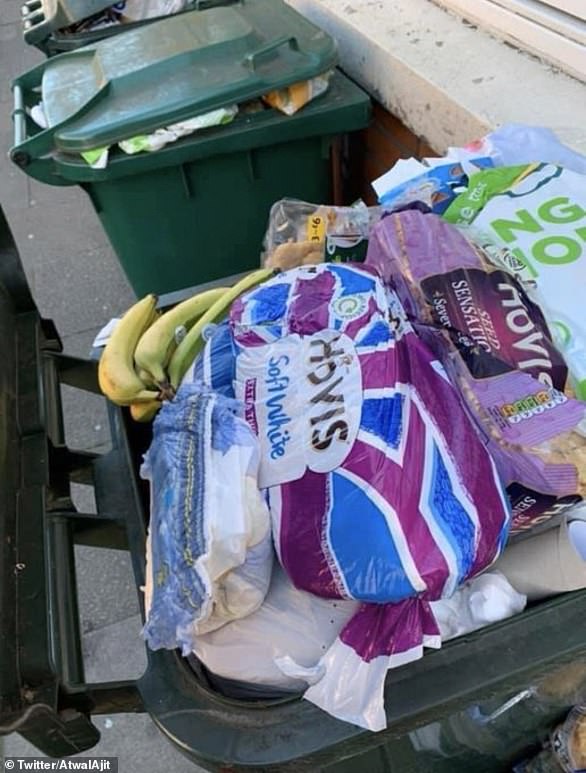 Over the weekend, loaves of bread, bunches of bananas and unopened packs of chicken products were tossed aside after they went past their use by date in Derby

Nicole added: ‘Should name and shame them! It’s disgraceful! They could feed a poor family who haven’t got the money! It angers me so much!’

He posted the photos with the caption: ‘To all the people in this great city of ours in Derby, if you have gone out and panic bought like a lot of you have and stacked up your houses with unnecessary items you don’t normally buy or you have bought in more food than you need, then you need to take a good look at yourself.’

One social media user who shared the pictures wrote: ‘Absolutely disgusting! Wasteful hoarding pigs! Those bins should have wheeled around to the needy at the very least.’ 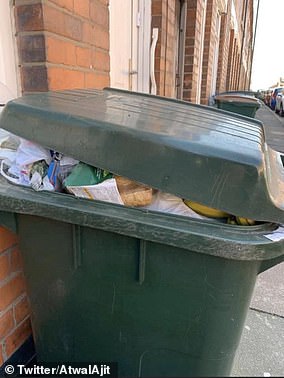 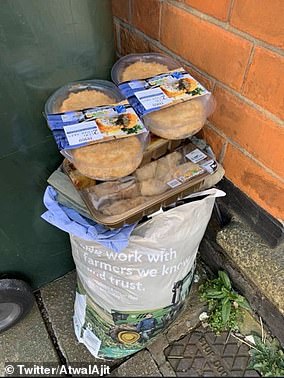