London: A climate summit due to take place in Glasgow in November has been postponed to 2021 because of the coronavirus outbreak, throwing a new element of uncertainty into talks to tackle global warming. 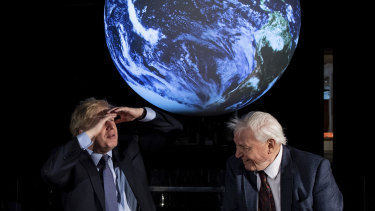 Britain’s Prime Minister Boris Johnson, left, and David Attenborough at the announcement of the COP26 UN Climate Summit which has been cancelled. Credit:AP

With the world currently on track for catastrophic temperature increases, the two-week summit had been supposed to galvanise renewed international commitment to an accord brokered in Paris in 2015 aimed at stabilising the Earth's climate.

But with the British hosts and other countries struggling to contain the coronavirus pandemic, which has brought swathes of the global economy to a standstill, officials on Wednesday decided to push the summit back to give governments more time to prepare.

Ending widespread speculation that the summit would be postponed, Finnish Environment Minister Krista Mikkonen said the climate summit and a separate summit on preserving threatened species, which had been due to take place in Kunming, China in October, were both being pushed back to next year.

"Glasgow's COP26 climate conference will move from November to next year due to the global coronavirus situation," Mikkonen said in a statement, quoting UN climate officials.

With financial markets also in turmoil, hopes that 2020 would prove a pivotal year for climate diplomacy and action to reverse accelerating extinctions of plant, animal and insect species have rapidly faded.

Nevertheless, some investors, diplomats and campaigners welcomed the postponement, saying it could buy governments time to prepare a more successful outcome than might be possible in the face of a global pandemic and turmoil in financial markets.