Top US infectious disease expert Dr Anthony Fauci has played down fears that a mutation of coronavirus found in mink in Denmark could undermine a future vaccine.

Danish authorities decided to cull the country’s 17 million mink, before reversing their decision. Australian experts have also called for calm over the mutation fears. 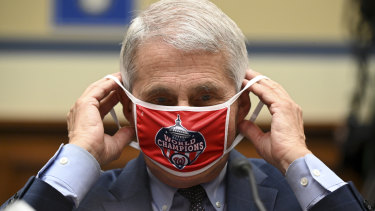 Dr Anthony Fauci with a Washington Nationals baseball team mask, which Trump ridiculed in a series of tweets to start the week.Credit:Bloomberg

“Whenever you see something like that you need to pay attention to it. You certainly can’t just blow it off, you’ve got to look at it,” Dr Fauci told a Chatham House discussion.

“It does not appear at this point, that that mutation that’s been identified in the minks is going to have an impact on vaccines and the effect of vaccine-induced immune response.

“It might have an impact on certain of the monoclonal antibodies that are developed against the virus – we don’t know that yet.

“But at first cut, it doesn’t look like something that’s going to be really a big problem for the vaccines that are currently being used to induce an immune response.”

Dr Fauci said the pandemic has revealed an increasing and “unprecedented” distrust in science that has even extended to threats of violence.

He said coronavirus was not going anywhere, predicting it would become endemic once the pandemic officially ended.

The DHHS listed Melbourne Airport Terminal 4 from 11.45am-1.20pm on November 9 as a possible exposure site. It corrects a report from yesterday which said that same location but incorrectly listed the date as November 10.

US cases continue to surge nationwide

In Missouri, Wisconsin, more than one in three COVID tests is positive.

In New York, cases have soared to a level not seen since June. 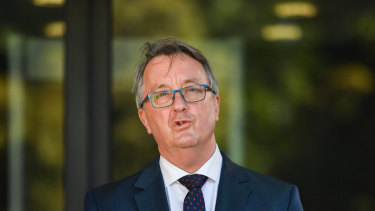 The government's road map out of lock down states that Victoria would take the last step towards COVID normal when the state records no new cases for more than 14 days. Its modelling predicted that this milestone would not be achieved until November 23.

Under the initial plan, public gatherings were set to increase to 50 people outdoors and up to 20 visitors were allowed in homes.

The government's updated plan scaled back the number of people allowed in homes to 10 visitors but maintains gatherings of 50 people outdoors.

Weddings and funerals would be allowed with 100 people or 10 in a private residence and organised contacts sports would resume for all ages with limitations for spectators.

When asked yesterday about the possibility of bringing forward announcements about further easing of restrictions, Health Minister Martin Foley said the government wanted to take "a careful cautious approach".

"Each step of the way, has been marked and run by data and science, and that will continue," he said.

G'day everyone! It's Roy Ward here and I'm on the tools once again for today's COVID-19 live blog. We have another big day ahead as Victoria chases a 14th day of no new cases and states like New South Wales and Queensland continue their path towards a much more normal summer.

Enjoy the day to come.

Related posts:
No10 press chief Allegra Stratton slams 'unpleasant' Vote Leave aides
HUGE fireball seen over US – ‘Almost thought it was a plane crashing’
Popular News
Number (N)ine FW20 Is Packed With Bold Prints and Textured Fabrics
30/11/2020
Man Utd wonderkid Ramon Calliste, called ‘the next Giggs’, now owns luxury watch business and makes £5m a year – The Sun
26/03/2020
Megan Thee Stallion Addresses Criticism Over Twerking: ‘I Love to Shake My A**’
26/03/2020
Police guard shops to stop coronavirus panic-buyers and enforce social distancing – The Sun
26/03/2020
Coronavirus: Good Morning Britain’s Dr Hilary reveals ‘game-changing’ self-testing kit
26/03/2020
Recent Posts
This website uses cookies to improve your user experience and to provide you with advertisements that are relevant to your interests. By continuing to browse the site you are agreeing to our use of cookies.Ok