A Sri Lankan politician sentenced to death for murder was escorted out of prison on Tuesday to become the first convict to be sworn in as a member of parliament, to heckles from opposition MPs.

Premalal Jayasekara from the ruling Sri Lanka Podujana Party (SLPP) was convicted in August of murdering an opposition activist after opening fire at an election rally in 2015.

But the 45-year-old’s conviction and sentence came after nominations for the August 5 poll, meaning he could still contest the election and take up his seat. 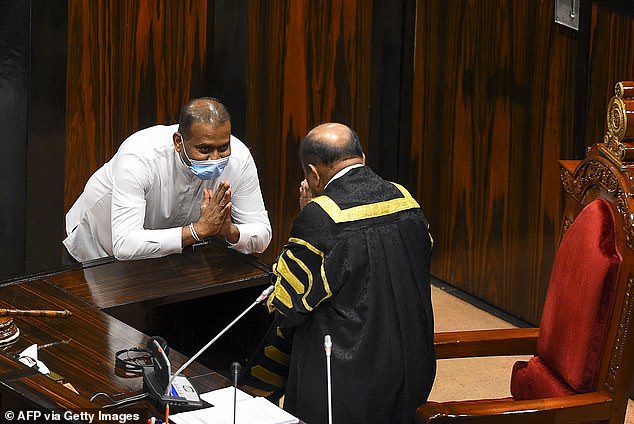 Premalal Jayasekara, a convicted murderer, was heckled as he took oath as an MP in Sri Lanka’s parliament

Jayasekara was a no-show when the current parliament held its first session on August 20 as prison authorities refused to let him out.

However, he petitioned the Court of Appeal which on Monday held that he should be escorted from prison to exercise his rights as an MP.

Opposition lawmakers wearing black shawls in protest heckled Jayasekara as he took the oath and several staged a walkout.

He is to be escorted back to prison after the day’s session. 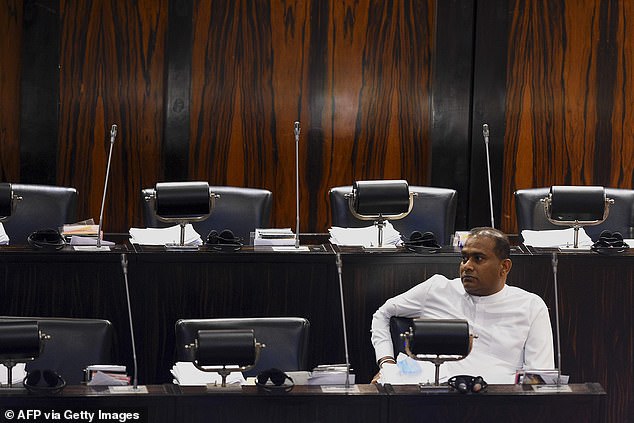 Jayasekara became the first convicted murderer to serve as an MP in Sri Lanka. He has been an MP since 2001.

In January 2015, he opened fire at a stage being set up for an election event by a rival party, killing one person. He has appealed the conviction and the death sentence.

Although Sri Lanka hands down death sentences, no one has been executed since 1976.

Jayasekara is not the only legislator to be escorted from prison to parliament in Sri Lanka. 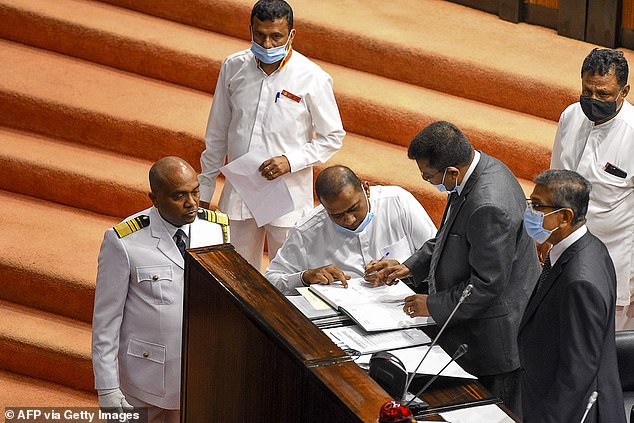 Jayasekara became the first convicted murderer to serve as an MP in Sri Lanka. He has been an MP since 2001

Sivanesathurai Chandrakanthan, a first-time MP, is awaiting trial for alleged murder and is brought in for legislative sessions.

Brushes with the law are no bar to a career in politics in South Asia.

More than 40 percent of lawmakers in India’s parliament face criminal charges — some as serious as murder and rape — according to the Association of Democratic Reforms, an electoral reform group.

Related posts:
2pm Man Utd transfer news LIVE: Jadon Sancho LATEST, Smalling trains on own, Thiago linked, Alex Telles updates – The Sun
Yusuf/Cat Stevens Duets With His Younger Self in 'Father and Son' Video
Popular News
DJ LeMahieu’s batting title comes with message to Yankees
28/09/2020
Man Utd wonderkid Ramon Calliste, called ‘the next Giggs’, now owns luxury watch business and makes £5m a year – The Sun
26/03/2020
Megan Thee Stallion Addresses Criticism Over Twerking: ‘I Love to Shake My A**’
26/03/2020
Police guard shops to stop coronavirus panic-buyers and enforce social distancing – The Sun
26/03/2020
Coronavirus: Good Morning Britain’s Dr Hilary reveals ‘game-changing’ self-testing kit
26/03/2020
Recent Posts
This website uses cookies to improve your user experience and to provide you with advertisements that are relevant to your interests. By continuing to browse the site you are agreeing to our use of cookies.Ok