Community garden at Collingwood Children’s Farm to be cleared

A sprawling community garden at Collingwood Children’s Farm will be cleared after an external consultant’s report found there were unacceptable risks of visitors being bitten by snakes and impaled by star pickets in the event of a fall.

More than 100 people working 70 plots have been locked out of their allotments indefinitely while management decides in what capacity they can return. 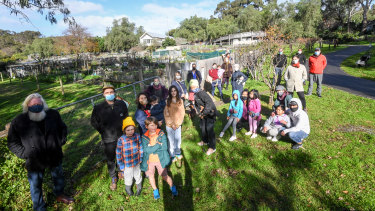 Locked out: Community gardeners outside the closed gardens on Friday.Credit:Justin McManus

The reasons for the 42-year-old garden’s closure have been met with disbelief by gardeners, who say star pickets could easily be capped and snakes have been a known risk along the adjacent Yarra River for generations.

But the farm’s management said clearing the site and starting again offered the opportunity to create a fresh vision for the precinct, despite giving no timeline for works.

The sprawling community gardens have been a salve to the soul for Paul Garvey during the past 14 months of rolling coronavirus lockdowns.

Mr Garvey and his wife Richie Angelo loved being part of the community garden so much they recently bought a house nearby.

“You’ve got old people there – it’s their livelihood, it’s their food source,” Mr Garvey said. “And especially at the moment. Community’s everything.

“I just feel so bad for some of these older people – it’s their world.”

The community gardens, which were started by Greek and Turkish migrants in 1979, are set alongside a tangle of the Yarra River notorious for its snake population.

Nina Collins, president of Collingwood Children Farm’s management committee, said the farm had a duty of care to garden users and had to act after receiving a safety report by an external consultant last Thursday.

“To say that the findings were not good, would be an understatement,” she said. “The report identified major safety issues and concluded that the site is unsafe for gardeners, the community and farm staff. Several factors were rated as an extremely high risk, requiring immediate action.” 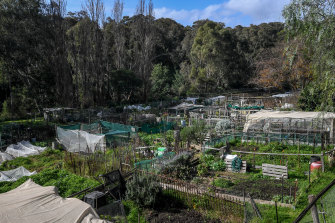 The gardens have been deemed extremely risky.Credit:Justin McManus

The most extreme risks identified in the report were the risk of people being bitten by snakes and the risk of being impaled on a star picket protruding from the ground. Concerns were also raised about the uneven ground and the risk of falls.

“These works are not superficial and cannot be isolated or completed progressively. Heavy machinery needs to be used to remove safety risks and clear the site. To do so in any other way would be unsafe.”

Gardener Tim Handfield, who has had a plot for about seven years, said he believed the report was suspicious and management’s characterisation of the risks were “bordering on hysterical”.

“I think when they talk about dangerous material, wire and stakes and things like that, it was just a ridiculous exaggeration,” he said.

Mr Handfield said the gardens had a rich cultural history that should not be bulldozed for unclear reasons.

Peter Barber, in his late 60s, runs a weekly community support group at the gardens and has tended to plots there for more than three years. 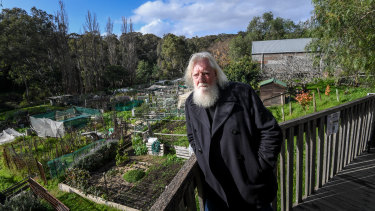 Peter Barber has tended a plot at the gardens for more than three years.Credit:Justin McManus

“In that time I have not seen or heard of one serious accident or heard one spoken about historically,” he said, stressing that safety was important.

Mr Barber estimated he will lose $3000 worth of artichokes that were going to raise funds for a veggie garden at a community house for women, and said he was grieving the loss of the plots and their potential to support others.

Margot Foster, who recently relinquished her plot at the garden but still volunteers at the farm, said there was a real opportunity to improve the gardens, including making them more accessible.

Farm management had no choice but to act on the report, she said, which identified serious occupational health and safety risks.

“When the plots become weedy and overgrown or cluttered with wire and weeds and tin as many do, they become a bit snakey for my comfort,” she said, adding she had been startled by snakes at close quarters three times at the garden.

The farm’s management said the redevelopment would be a significant project requiring detailed planning, budgeting and community consultation. It could not say when the new gardens would be finished.

University of Melbourne honorary fellow and urban farming expert Dr Chris Williams was commissioned in 2020 to write a separate assessment of the gardens. His assessment led to the establishment of a productive market garden next to the community gardens.

“On the one hand we have this example of a very inclusive space where people actually learn about food production and food has actually grown, and then on the other, something which has now become kind of very isolated and dysfunctional,” he said.

Yarra councillor Stephen Jolly said closing the gardens should be a last, rather than first, resort and urged management to reverse the decision.

“I mean, this is something that can be sorted out on a Sunday working bee, rather than having to close down the whole place without any communication with the stakeholders, no real communication and no plans for when it’s going to be reopened.”