A civil servants’ union has won the right to challenge Boris Johnson in High Court after he backed Priti Patel in the bullying row.

The Association of First Division Civil Servants (FDA) launched judicial review proceedings in February over the Prime Minister’s decision to disregard the findings of his adviser on ministerial standards.

Sir Alex Allan left his advisory role in Downing Street when Mr Johnson decided Ms Patel did not breach the rules, even after she was found to have bullied staff.

In February Ms Patel’s permanent secretary Sir Philip Rutman resigned, claiming there had been a ‘vicious and orchestrated’ campaign against him. He said he intended to sue the Government for constructive dismissal.

His bullying claim was later settled with a ‘substantial’ payout worth £370,000. In a statement the Government said it ‘regretted’ the circumstances surrounding Sir Philip’s resignation – although it did not accept liability and defended its decision to defend the case. 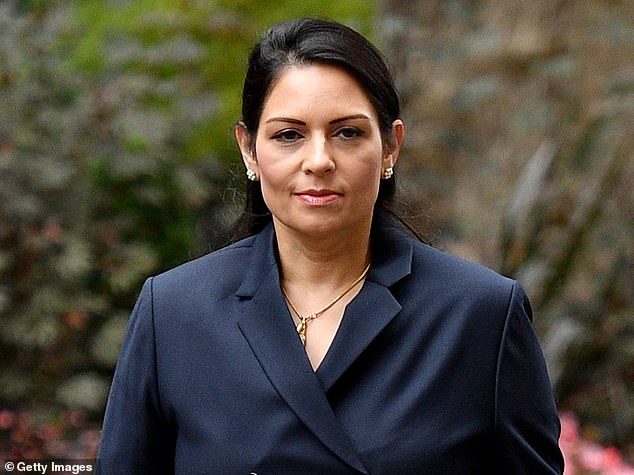 Sir Alex Allan left his advisory role in Downing Street when Boris Johnson decided Priti Patel (pictured) did not breach the rules, even after she was found to have bullied staff

At a hearing in London on Tuesday, Mr Justice Linden granted the FDA permission for a full hearing of the judicial review claim.

In an investigation into Ms Patel’s behaviour, published in November, Sir Alex found the Cabinet minister had not always treated civil servants with ‘consideration and respect’.

Ministers are usually expected to resign if they breach the code but Mr Johnson, who is its arbiter, judged, in a decision that is being challenged by the FDA, that Ms Patel had not fallen foul of the rules.

The FDA is challenging Mr Johnson’s decision that Ms Patel’s conduct did not breach the ministerial code. 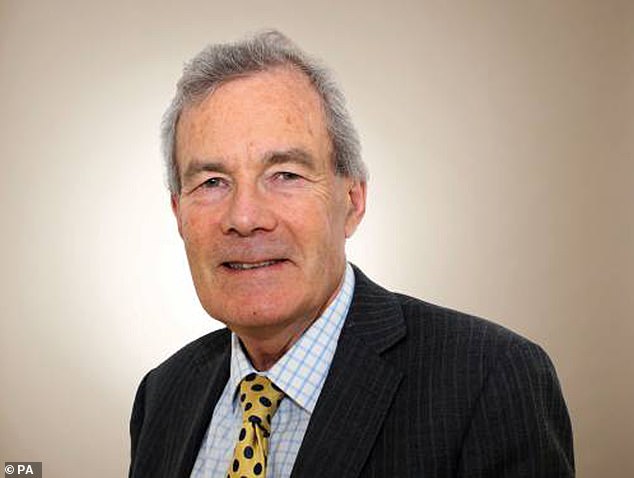 In an investigation into Ms Patel’s behaviour, published in November, Sir Alex (pictured) found that the Cabinet minister had not always treated civil servants with ‘consideration and respect’

Mr Justice Linden said while it is arguable Mr Johnson was entitled to rely on his own interpretation of the word ‘bullying’ when reaching his decision, it is also arguable the court may be persuaded the word should be interpreted in the context of the Civil Service staff policies.

The judge who hears the full case will also have to decide whether the court is capable of determining the issue and whether the FDA has standing to bring the claim.

Dave Penman, the union’s general secretary, said in a statement: ‘We are very pleased that Mr Justice Linden has today granted permission for a full hearing in our judicial review.

‘The ministerial code is the only means by which civil servants can raise complaints against the conduct of ministers and it is vital that decisions on this are subject to the rule of law.

‘Ministers should be held to the same standards of conduct as civil servants.

‘We welcome the opportunity now granted to argue that point fully that the Prime Minister erred in his interpretation of the ministerial code when deciding that the Home Secretary did not break the code.’

Mr Penman said in February the affair had obliterated Civil Service trust in the ministerial code.

He said a survey taken since of FDA members who are most likely to work with ministers found that nearly 90 per cent said they have no confidence in the ministerial code as a mechanism for dealing with bullying and harassment by ministers.

Speaking at that time, he added: ‘This is not about whether the Home Secretary should be forced to resign, that is a matter for the Prime Minister, this is simply about how the ministerial code is interpreted.’

Following the publication of Sir Alex’s report, Ms Patel issued an ‘unreserved, fulsome apology’ and said there were ‘no excuses’ for what happened.

Mr Johnson later wrote to ministers and heads of Government departments reminding them there is ‘no place for bullying’.

Sir Philip Rutnam claimed there had been a ‘vicious and orchestrated’ campaign against him and added that he intended to sue the Government for constructive dismissal when he resigned in February.

After persistent reports of a major rift between Sir Philip and Priti Patel, the 33-year civil service veteran walked out with all guns blazing, launching a withering attack on Ms Patel in a statement on live TV.

He accused her of lying and said he had received allegations that she had shouted and sworn at staff.

The former official said he was the victim of a ‘briefing campaign’ and that in choosing to publicly resign he had turned down a ‘financial settlement’ from the Cabinet Office. 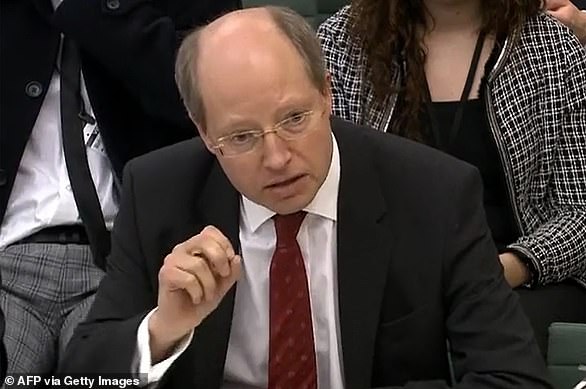 Sir Philip Rutnam, who quit as the Home Office’s permanent secretary after accusing the Home Secretary of a ‘vicious and orchestrated briefing campaign’ against him, said he was pleased his claim had been settled

The official had himself been accused of briefing against the Home Secretary in the media but said this claim was ‘completely false’.

It was claimed Ms Patel told Sir Philip to get rid of a senior official on Christmas Eve but the top mandarin refused.

Sir Philip said in his statement that his experience was ‘extreme’ and part of a ‘wider pattern’ in Government.

He told reporters: ‘In the last ten days I have been the target of a vicious and orchestrated briefing campaign. It has been alleged that I have briefed the media against the Home Secretary. 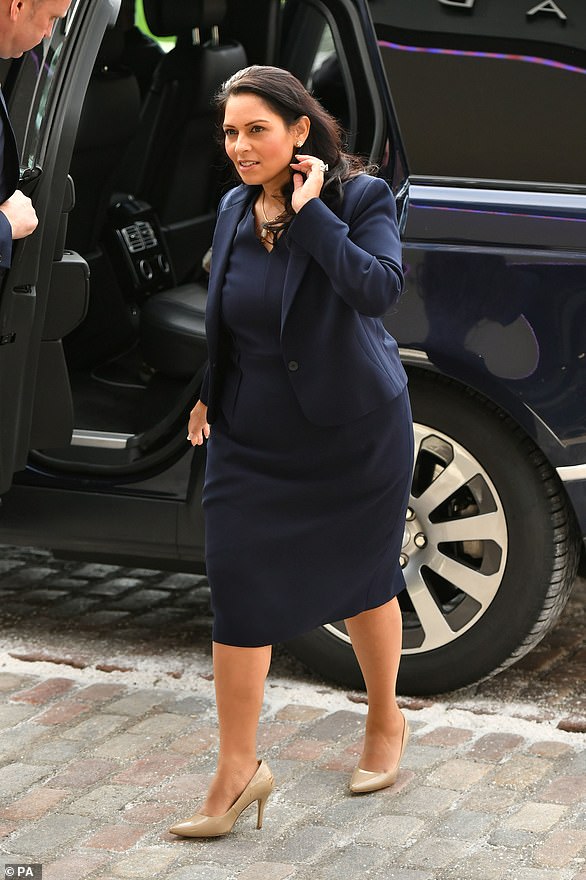 The 33-year civil service veteran launched a withering attack on Ms Patel in his resignation statement which he made on live TV. Pictured: Ms Patel arriving at the National Police Chief’s Council in London

‘This along with many other claims is completely false. The Home Secretary categorically denied any involvement in this campaign to the Cabinet Office.

‘I regret, I do not believe her. She has not made the effort I would expect to dissociate herself from the comments,’ he added.

He went on to say that Ms Patel had made ‘no effort’ to engage with him about the alleged briefing campaign against him.

He said this gave him ‘strong grounds’ to claim ‘constructive unfair dismissal’ and that he would be pursuing the claim through the courts.

The Government paid out ‘substantial’ damages thought to be in the region of £370,000 to Sir Philip in March.

In a statement the Government said it ‘regretted’ the circumstances surrounding Sir Philip’s resignation – although it did not accept liability and defended its decision to defend the case. 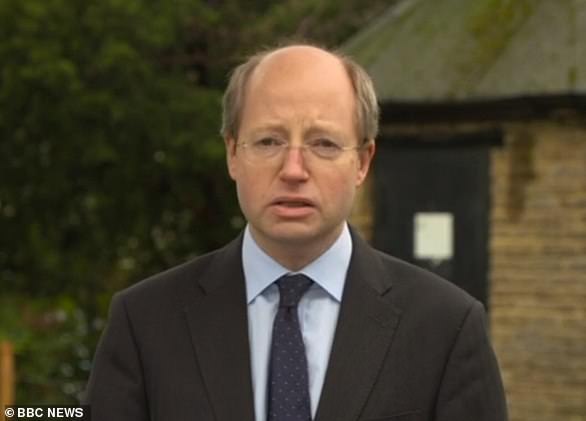 The taxpayer-funded payout is believed to be well into six-figures, but the decision to settle means that Ms Patel will avoid being cross-examined during any employment tribunal hearing.

In a statement Sir Philip said: ‘I am pleased to say that the Government has today settled the claims that I brought against them and which were due to be heard in an employment tribunal in September.

‘I have received excellent support during this process and I would like to express warm thanks to the FDA and to my legal team, Slater and Gordon and Gavin Mansfield QC.

‘I also want to record my appreciation and thanks to the many individuals, known and unknown to me, who have expressed their support throughout.

‘This settlement resolves my own case. The FDA is continuing to pursue in separate proceedings the wider issues that have been raised.

‘I now look forward to the next stages of my career.’