Christchurch: Armed police have raided two Christchurch homes after a person allegedly made a series of online posts threatening a terrorist attack involving car bombs on March 15, the second anniversary of the mosque massacre.

Members of the armed offenders squad carried out search warrants at the properties in St Albans and Linwood shortly before 6pm, Christchurch time, on Thursday. 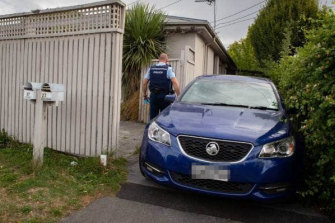 Two men were arrested, but were yet to be charged, police said.

Detective Inspector Michael Ford said police had acted on information from the public regarding “concerning communications on the 4chan site”.

The site is an anonymous online message board known to be frequented by far-right individuals.

On Sunday night, a person made a series of posts on the site using a similar online name to that used by the Australian terrorist Brenton Tarrant who fatally shot 51 people at the al-Noor and Linwood mosques in Christchurch on March 15, 2019. 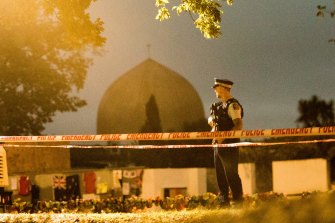 A policeman stands guard at al-Noor Mosque in Christchurch a week after the massacre in March 2019.Credit:Jason South

The poster said they were “originally English”, but grew up in South Africa before moving to New Zealand in 2009.

The person said they planned to “take action” on March 15 by carrying out an attack remotely on the two mosques using car bombs.

The explosions would be livestreamed, they said.

Others on the message board told them not to do anything “stupid or radical”.

Ford urged people to be vigilant in the lead-up to March 15 and report any concerning behaviour immediately.

“There’s absolutely no appetite for hate crimes in our community,” he said.

It is understood police have visited the Christchurch mosques in recent days and searched them for bombs.

A neighbour said she met a man who lived at the property a few days ago. He told her he had only just moved into the area, she said. She was shocked to hear the reason why police were at the house.

The Australian terrorist, now aged 30, was last year jailed for life without the possibility of parole after he pleaded guilty to 51 charges of murder, 40 charges of attempted murder and a charge of committing a terrorist act.