China's destroyer can strike stealth aircraft and take down satellites

Chinese navy’s latest destroyer is capable of countering stealth aircraft and satellites, according to the country’s state-run media.

It can also track satellites circulating the Earth at an altitude of up to 500 kilometres (310 miles) and guide missiles to attack them, Beijing’s military experts have suggested. 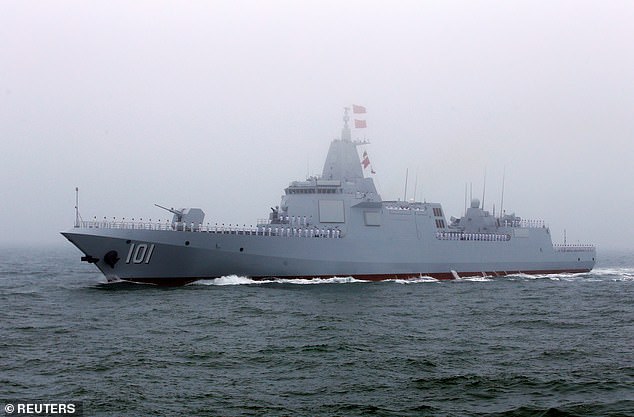 The 10,000-ton-class surface warship, officially named the Nanchang, was commissioned to China’s People’s Liberation Army on January 12 this year in the eastern port city of Qingdao

The 10,000-ton-class surface warship, officially named the Nanchang, was commissioned to China’s People’s Liberation Army (PLA) on January 12 this year in the eastern port city of Qingdao.

It is China’s biggest destroyer so far and has been billed as ‘the most powerful surface combatant’ in Beijing’s navy, apart from its aircraft carriers.

The Nanchang went into active service on the same day the US expressed its support for the re-elected Taiwanese President Tsai Ing-wen, who won in a landslide in January on the back of a message of standing up to Beijing.

And the newest reports of the vessel came as political tensions between Beijing and self-ruled Taiwan have escalated to a new high.

Taiwan, which China considers as part of its territory, celebrated its national day on Saturday.

On the same day, China’s state broadcaster released footage of the country’s soldiers ‘seizing an island’ during a live-fire drill – a move believed to aim at ratcheting up pressure on Taipei. 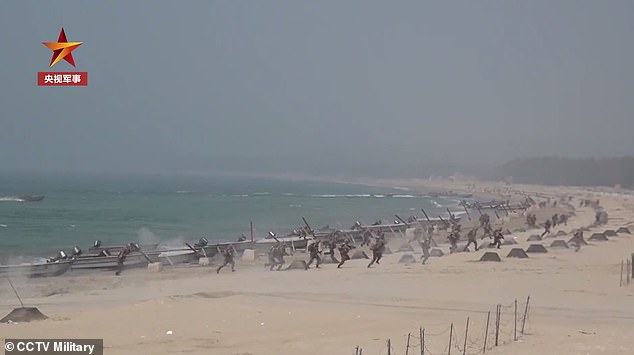 The state broadcaster claimed that the warship is equipped with a dual-band radar system that features anti-stealth and anti-satellite capabilities.

The vessel also has 112 vertical missile launching cells, including 64 at the front of the ship and 48 at the rear, the programme said.

Chinese military observers told state-run newspaper Global Times that the Nanchang’s technical features could give Chinese armies ‘a key edge over their opponents in modern warfare’.

Wang Ya’nan, a Chinese aviation and space expert, believed that the vessel carries a type of air-defence missile capable of reaching satellites in low-Earth orbit, which travel at between 300 and 500 kilometres (186 to 310 miles) above sea level. 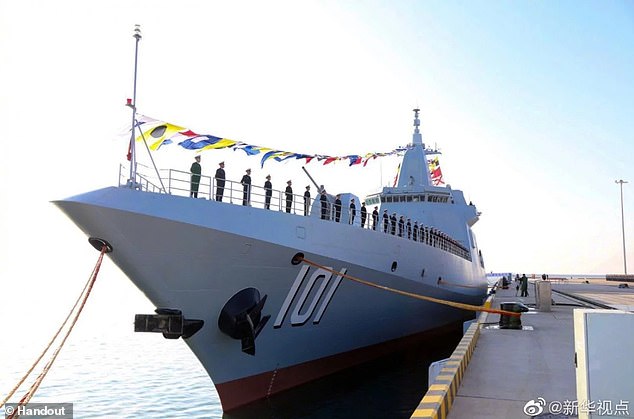 China could be using the reports to flaunt its combat readiness and technological prowess to the United States as the two nations lock horns over flashpoints such as Taiwan and the South China Sea, maritime security expert Collin Koh told MailOnline.

Koh, a research fellow at the S. Rajaratnam School of International Studies in Singapore, noted that ‘only a few major technological powers’ could muster the technologies China claimed the Nanchang to have.

He pointed out that Beijing’s message carried a technological dimension.

‘Beijing doesn’t appear keen to be browbeaten by the recent technological curbs imposed by Washington, and is therefore keen to show – partly through the PLA showcasing its capabilities – its ability to overcome technological hurdles and score achievements in critical areas,’ Koh added. 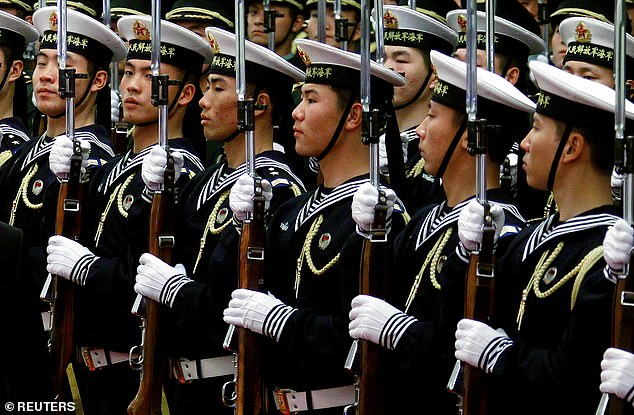 The Chinese navy is growing faster than any other major fleet. The picture shows members of the Chinese navy standing in formation during a welcoming ceremony in Beijing in 2011

It measures 180 metres (590 feet) in length and 20 metres (66 feet) in width. It has a displacement of more than 10,000 tons and is capable of launching a combination of surface-to-air, anti-ship, land-attack and anti-submarine missiles.

The Chinese navy is growing faster than any other major fleet. The country has been investing heavily on building a ‘deep blue water’ naval force capable of operating globally, and the official delivery of the Nanchang was a step forward in the ambitious military plan, according to a previous report from the Global Times.

International observers believe that the warship could signal Beijing’s efforts of increasing its military firepower further from its shores and into the western Pacific.

The Type 055 Nanchang destroyer is expected to form a battle group with either of the country’s two aircraft carriers, the Liaoning or the Shandong.