China has tested 3million people for coronavirus in just two days after 12 cases were detected in a major port city, health officials have claimed.

The cases were detected at a hospital in the city of Quingdao, population 9.4million, on Sunday. By Tuesday, officials said a third of the city had been tested.

The plan is to test the entire city within five days. Pictures show huge queues snaking away from mobile testing centres, with people arriving late into the night.

1.1million test results have been received so far, officials said, without revealing whether any more infections had been detected. 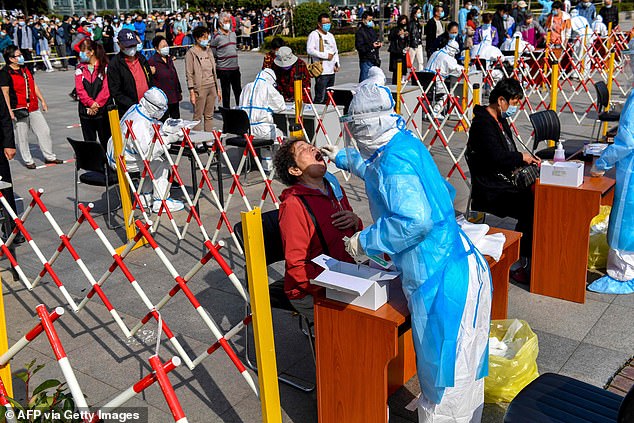 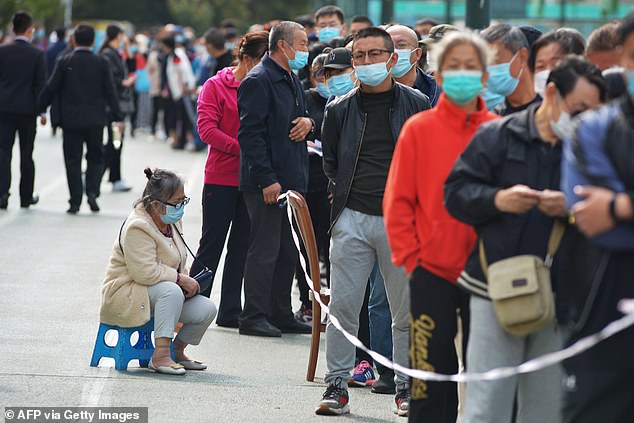 1.1million results have come back since testing began, Chinese officials said, without revealing whether any more cases were detected 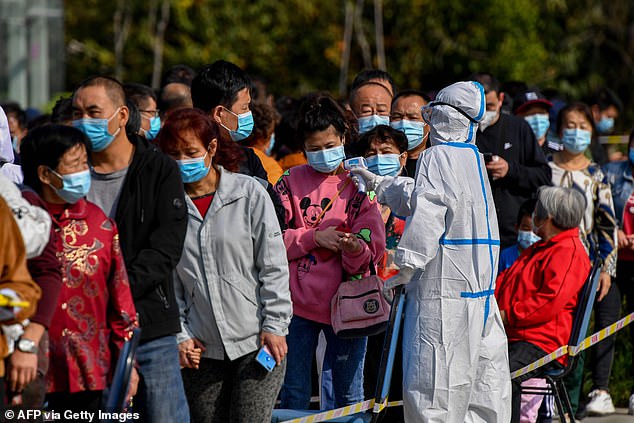 China has been keen to parade its mass testing capabilities in recent months, after errors and cover-ups early on during the pandemic allowed the disease to spread.

The country’s mass-testing regime far outstrips that of most other countries, where tests are often still difficult to access, almost a year after the disease first emerged.

Health officers say the Chinese government now has a policy of mass testing any city where clusters of infection are detected.

In Quingdao, all the infections were linked to a local chest hospital that had been treating infected patients returning from overseas.

The cases were first reported on Sunday, and health officials say 140,000 employees, patients and personnel linked to the hospital were tested the same day.

The outbreak was detected immediately after the ‘Golden Week’ holiday, when hundreds of millions travelled across China, leading to fears the infections could have spread beyond the city. 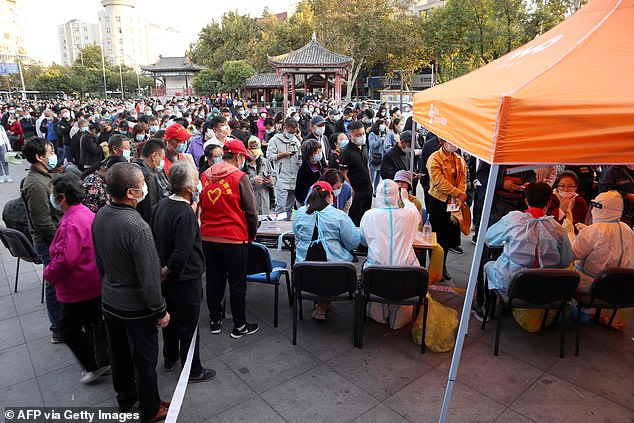 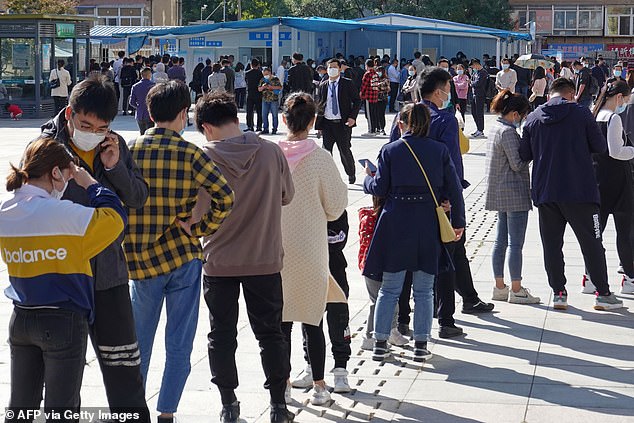 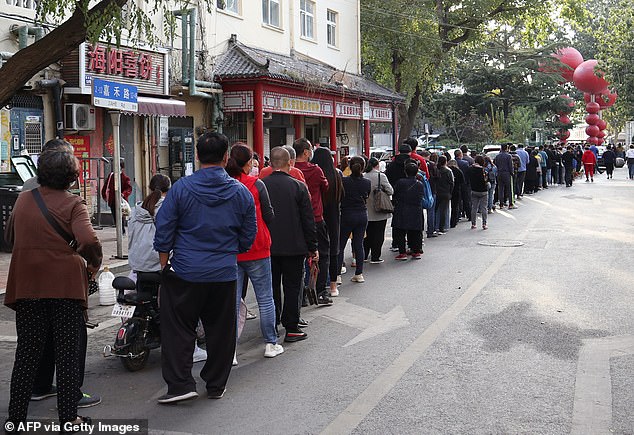 The infections were detected in Qingdao just after the Golden Week holiday when hundreds of millions of Chinese travel, leading to fears the disease could have spread

The city of Jinan, which is close to Qingdao, has asked everyone who visited since September 23 to get tested.

Testing in Qingdao is being carried out at makeshift medical centres around the city, which are operating between 7am and 11pm.

A spokesman for local authorities said the country now has a policy of mass-testing cities were a cluster of infections is reported, even if the cluster appears minor.

In June, large areas of the capital Beijing were subject to mass tests after the city of more than 20 million detected virus cases linked to a food market.

And the city of Wuhan, which has a population of 11million and is where the virus first originated, was tested in 19 days back in June after a cluster of infections there.

Authorities in Beijing claim to have brought the virus largely under control, using widespread lockdowns and mass testing to eliminate cases. 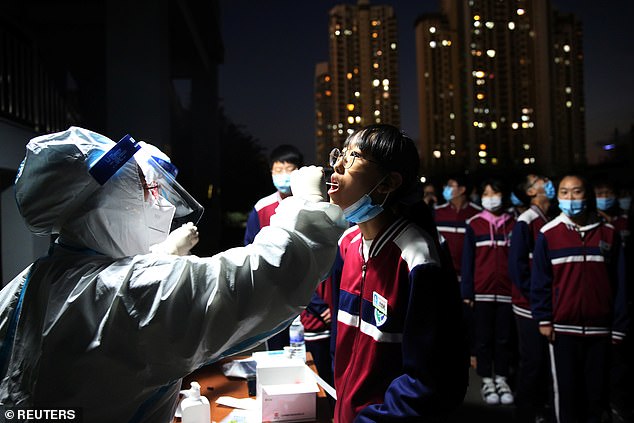 People queued late into the night in order to get coronavirus tests in Quingdao, with testing centres open until 11pm 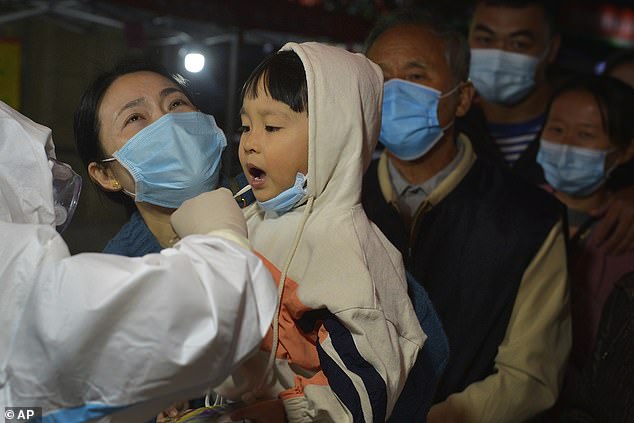 China’s mass-testing capabilities far outstrip those of other countries, where tests are still in short supply almost a year after the disease first emerged 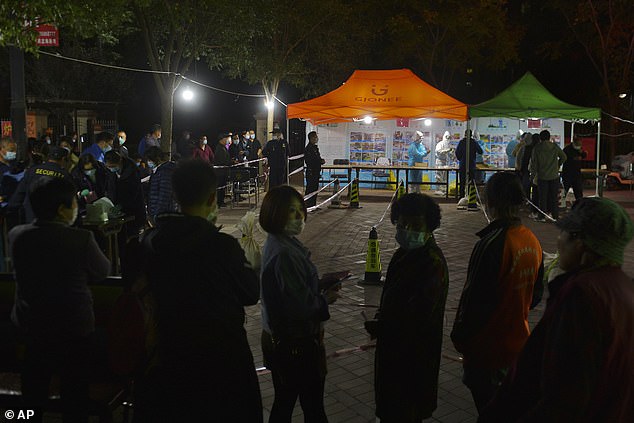 The country claims to have suffered just 90,000 cases of the virus and less than 5,000 deaths.

The US has also suffered a record-breaking economic slowdown due to the virus, which saw GDP fall almost 33 per cent during lockdowns earlier in the year.

China’s economy also shrank during the lockdown, by almost 7 per cent, though has now returned to growth and is expected to grow overall in 2020.

Beijing is also desperate to be first to conjure up a coronavirus vaccine, with several companies in final-stage trials.

Although unproven, vaccines have already been administered to hundreds of thousands of key workers and soldiers.

Related posts:
Hyères Festival Amps Up Digital Program as COVID-19 Keeps Fashion Jury at Bay
Cris Cyborg Wants To Rematch Amanda Nunes in UFC-Bellator Cross Promotion
Popular News
Melania Trump Shocked Beyoncé Was Featured On Cover Of ‘Vogue’, New Leaked Recording Reveals
22/10/2020
Man Utd wonderkid Ramon Calliste, called ‘the next Giggs’, now owns luxury watch business and makes £5m a year – The Sun
26/03/2020
Megan Thee Stallion Addresses Criticism Over Twerking: ‘I Love to Shake My A**’
26/03/2020
Police guard shops to stop coronavirus panic-buyers and enforce social distancing – The Sun
26/03/2020
Coronavirus: Good Morning Britain’s Dr Hilary reveals ‘game-changing’ self-testing kit
26/03/2020
Recent Posts
This website uses cookies to improve your user experience and to provide you with advertisements that are relevant to your interests. By continuing to browse the site you are agreeing to our use of cookies.Ok