Home » World News » Cheer up, the kids have got good news for you

Cheer up, the kids have got good news for you

The media is a tough industry to break into, but that hasn't stopped Victoria's youngest journalists from keeping their neighbours informed through the coronavirus pandemic.

Frankie Davis, 9, published her newspaper, The Cheer Up Weekly, last week as a way to escape the boredom of being in lockdown because of COVID-19. 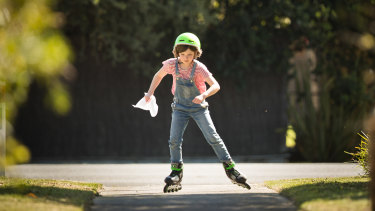 Frankie delivers her newspaper, The Cheer Up Weekly. Credit:Jason South

As anyone who starts a new publication can tell you, it hasn't been without its challenges.

After compiling her stories — including interviews with friends, a pet report and "five jokes that will make adults laugh" — Frankie was ready to publish. And then her dad, Matt, spilled coffee on the computer.

But like any dogged journalist, she persisted under deadline pressure and got the paper out on time, much to the relief of the readers of Queenscliff and Point Lonsdale.

Frankie distributed about 70 copies on the Bellarine Peninsula, wearing rollerblades as she made her rounds — an innovation in newspaper delivery surely without equal.

"Well, I knew that lots of my friends and lots of people in our community were pretty bored because we still had two more weeks of lockdown," she said.

The idea came to her after watching a recent episode of the ABC's Behind the News featuring people who were making things for their community.

"So I thought I would make one too," she said.

The reaction to Frankie's first edition would make any editor proud – and it hasn't only come from those lucky enough to get a copy.

Frankie spoke to Sunrise and ABC radio on Thursday. CNN has made an inquiry for an interview.

"It's quite silly. It's supposed to cheer people up," she said. "I think it was really fun to have a big project to do."

Her mother, Jayne Tuttle, owner of The Bookshop at Queenscliff, said having something to focus on had helped Frankie get through "a bit of a slump" while remote learning.

"We said, 'What would you like to do?' She said, 'I would like to do something for the community. I think I'd like to make a newspaper,' " Ms Tuttle said.

"The kids who were interviewed loved it; it's put a pep in their step — our next-door neighbour too."

The newspaper isn't the only local publication started by children during lockdown.

In Yarraville, the Schofield sisters – Georgia, 11, Kalia, 9, and Catherine, 7 – have published two editions of their newspaper, Aston Rising, in recent weeks.

The front-page headline gives an idea of the editorial position: "CONFUSED, ANNOYED BUT I CAN GO TO THE PARK!"

However, it's not all serious. There are also jokes, a crossword and cartoons.

"We just wanted to make people laugh and make people get off their screens a bit more," said Georgia.

With a circulation of about 13 copies, the readership of Aston Rising is small but influential, including neighbours and friends.

In a nod to old-school newshounds, the articles were written up on a typewriter before going to press.

As for whether she would like a career as a journalist one day, Georgia is already sharpening her pencil.

Related posts:
EastEnders Quiz: How well do you know these powerful Walford women?
Under legal pressure, Zimbabwe announces mining ban in national parks
Popular News
Cristiano Ronaldo surpassed a Juventus legend in the club’s all time scoring charts as he struck home a clinical goal on the opening day of the new season
21/09/2020
Man Utd wonderkid Ramon Calliste, called ‘the next Giggs’, now owns luxury watch business and makes £5m a year – The Sun
26/03/2020
Megan Thee Stallion Addresses Criticism Over Twerking: ‘I Love to Shake My A**’
26/03/2020
Police guard shops to stop coronavirus panic-buyers and enforce social distancing – The Sun
26/03/2020
Coronavirus: Good Morning Britain’s Dr Hilary reveals ‘game-changing’ self-testing kit
26/03/2020
Recent Posts
This website uses cookies to improve your user experience and to provide you with advertisements that are relevant to your interests. By continuing to browse the site you are agreeing to our use of cookies.Ok