Carrie Symonds’ agony: As Boris Johnson battles coronavirus in intensive care, the mother of his unborn child is a few miles away, still recovering from the illness herself and unable to be by his side 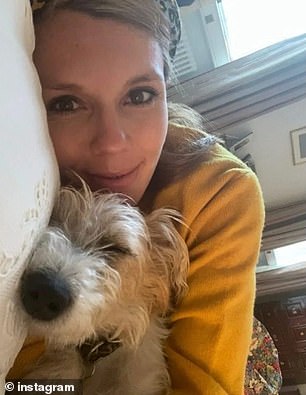 When he went into self isolation, she quietly left Downing Street, and it is thought she has been with her mother. She is pictured in self isolation with Dilyn the dog

The attention of the nation was focused last night on the worsening condition of Boris Johnson.

But there is one person above all whose agony will be immeasurably greater than any other – his heavily pregnant fiancee Carrie Symonds.

With the birth of her first baby only weeks away, the 32-year-old was already under tremendous strain.

Even before the Prime Minister, 55, had to go into self isolation after contracting Covid-19 she has barely seen him for weeks.

He has no choice but to put caring for her in her delicate condition second in order to chair endless Cobra meetings to discuss coronavirus.

To her credit, Miss Symonds, a highly independent woman with a passion for life and a successful professional career behind her – and still in her 30s – has coped remarkably well.

She has appeared occasionally on social media but put her own welfare to one side to help Boris cope with the massive political pressures he has been under.

When he went into self isolation, she quietly left Downing Street, and it is thought she has been with her mother. Instead of having just an hour or so a day with Boris, she could not see him at all. 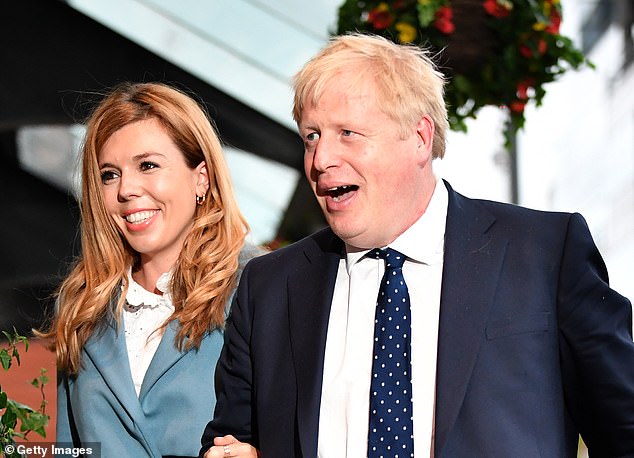 Even before the Prime Minister, 55, had to go into self isolation after contracting Covid-19 she has barely seen him for weeks. The couple are pictured in September

At the weekend it emerged that Miss Symonds has also experienced the symptoms of the virus.

Although there is no evidence that it can harm a foetus, medical and scientific understanding of coronavirus is so limited, no one can be absolutely certain.

And as any mother will testify, the birth of a first child is one of the most physically and emotional stressful times of their life – and joyous if all goes well.

If Miss Symonds is at her mother’s home in East Sheen, South West London, she will be several miles from her partner’s hospital ward.

But she will be unable to visit him because of his and her condition. When Mr Johnson and former Tory Party head of press Miss Symonds fell in love, many were sceptical that it could last. 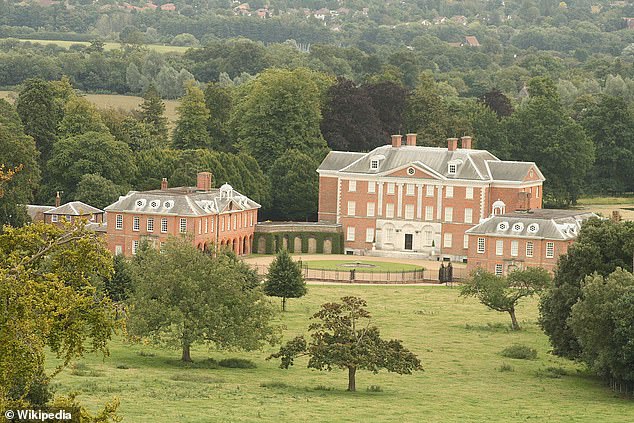 How the intimacy of those blissful weeks at Chevening, when they were alone and constantly in each other’s company must seem like a world away. Little did they know that their lives were about to be thrown into such personal and political turmoil

She was too young and inexperienced and Johnson with his roving eye would soon tire of her.

The cynics appeared to have been proved right when they were overheard having a spectacular domestic spat in their London house early in their relationship.

But they have proved the doubters wrong. Despite not being married, they negotiated tricky moments like visiting the Queen at Balmoral as an unmarried couple, with great dignity.

Miss Symonds proved a great asset to Mr Johnson in the election campaign. She curved her love of the limelight and made sure he was the centre of attention.

She was seen with him occasionally, but busied herself campaigning for a number of female Tory friends standing as candidates.

Her friends say that that when she and Mr Johnson became a fixed item, Carrie made it clear that she expected to become a mother.

Within weeks of becoming Prime Minister she became pregnant. Mr Johnson was heavily criticised soon into his premiership when many parts of Britain were badly flooded and he failed to visit them.

At the time he was staying with Miss Symonds at the Foreign Secretary’s official residence, Chevening in Kent, while repairs were being carried out at Chequers. Mr Johnson fell in love with Chequers in his days as Foreign Secretary in Theresa May’s government.

Outpouring of support for PM

Political heavyweights of all colours united to wish Boris Johnson a speedy recovery and hundreds of messages of support were sent.

Newly-appointed Labour leader Sir Keir Starmer tweeted: ‘Terribly sad news. All the country’s thoughts are with the Prime Minister and his family during this incredibly difficult time.’

Chancellor Rishi Sunak wrote: ‘My thoughts tonight are with Boris Johnson and Carrie Symonds. I know he’ll be getting the best care possible and will come out of this even stronger.’ Scotland’s First Minister Nicola Sturgeon said: ‘My thoughts are with the PM and his family – sending him every good wish.’

Shadow justice secretary David Lammy wrote on Twitter: ‘Awful news. My very best wishes to the Prime Minister, as well as his partner Carrie, family and friends. Get well soon.’

French president Emmanuel Macron said: ‘All my support for Boris Johnson, his family and the British people at this difficult time. I wish him to overcome this ordeal quickly.’

He regularly went for swims in the Chevening lake, urging male guests to strip off and join him.

One MP who has known him since before he became an MP said: ‘He was excited at being able to be with Carrie at Chevening officially. It is no secret that they used to go there for trysts before they were officially an item.

‘They had a brief break in Mustique but it was at Chevening that they had the time and space to get to know each other better. Then Carrie got pregnant. It was wonderful.’

How the intimacy of those blissful weeks at Chevening, when they were alone and constantly in each other’s company must seem like a world away.

Little did they know that their lives were about to be thrown into such personal and political turmoil. 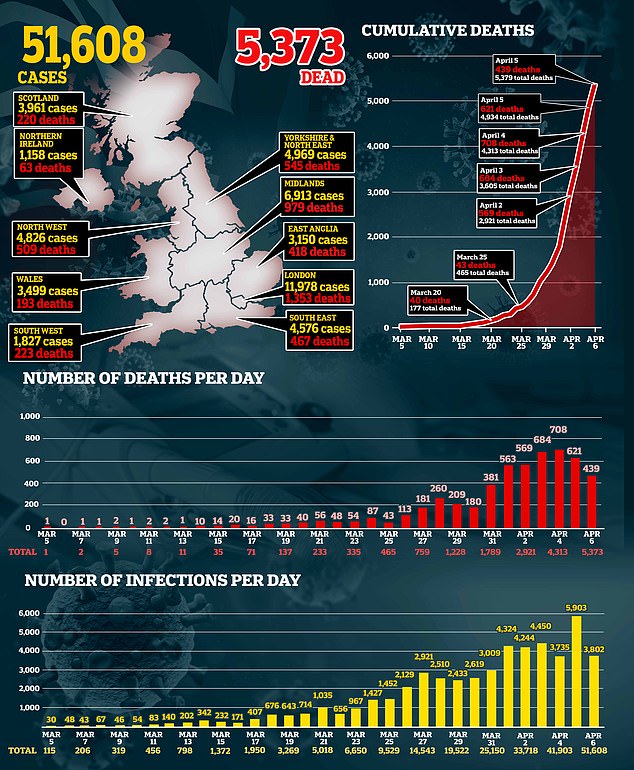