After the remaining two out of six inmates who escaped from a California jail in January were apprehended in Arizona, a sheriff detailed at a press conference how they managed to escape in the first place six months ago, partially placing the blame on the structure’s crumbling infrastructure.

Jorge Barron, 20, and Manuel Leon, 22, were taken into custody by the U.S. Marshals Service in Glendale, Ariz., on Friday.

Speaking at a press conference Tuesday, Merced County Sheriff Vern Warnke detailed how the inmates plotted their escape for months and showed images of the air duct that the six crawled through to make it to the roof before using a rope to rappel down the side of the building.

The ventilation system had been cut through about a quarter-inch of steel, officials said. Photos showed how the inmates were then able to access the HVAC unit and the plumbing chase. They then made their way to the roof and rappelled down the building.

Warnke also described how the escape resembled the one shown in the movie “Escape from Alcatraz,” starring Clint Eastwood, Fox 26 reported.

“Our building was built in 1968. It’s in desperate need of replacement and part of the reason they were able to get out because the building for a lack of better term is falling apart,” he said. 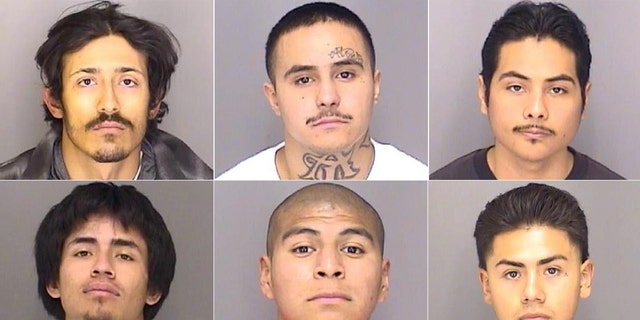 An administration investigation found that several staff members failed in their duties to secure the safety of the facility. Warnke said three deputies were also responsible for failing to do their jobs, but he said state law prevents him from publicly detailing how exactly they were punished.

“I want to dump the bucket. I’d like to have everybody see everything that went on because it’s sickening to me what I saw,” he said. “But they were all dealt with accordingly.”

Barron and Leon were arrested at two separate locations in Glendale without incident and will be transported back to Merced County Jail.

The Merced County Sheriff’s Office had been working with several local, state and federal law enforcement agencies, including the U.S. Marshals Service and the California Department of Corrections and Rehabilitation (CDCR) Special Services Unit, to track down and apprehend the six men who escaped from the Merced County Jail on Jan. 9.

The U.S. Marshalls Service offered a reward of $5,000.00 per escapee for any information leading to their apprehension. The escapees were considered armed and dangerous.

On Jan. 12, 22-year-old Edgar Ventura was apprehended without incident in Firebaugh, Calif., by the Firebaugh Police Department. He turned himself in at the police department after he was encouraged by family members due to pressure from investigators working the case, officials said.

Later that day, 22-year-old Fabian Cruz Roman and 21-year-old Andres Nunez Rodriguez were apprehended in the San Diego area without incident with the assistance of the U.S. Marshals Office and other law enforcement agencies as they attempted to make their way to the U.S.-Mexico border.

Then on Feb. 6, deputies with the Merced County Sheriff’s STAR Team found 19-year-old Gabriel Francis Coronado in the Livingston area of Merced County. Coronado was arrested without incident.