California firefighters get help in battling series of massive blazes 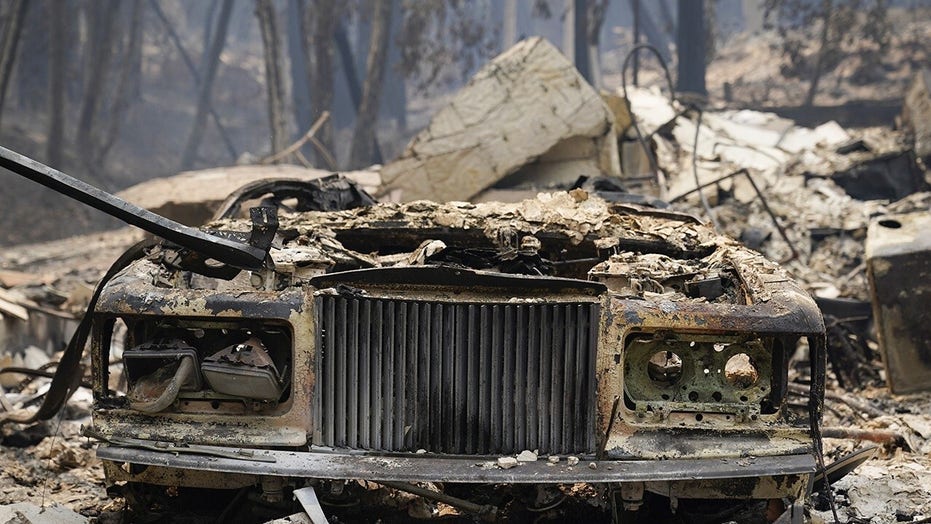 California firefighters are hoping Tuesday that reinforcements arriving from other states can help them gain ground on a number of wildfires that so far have killed seven people and damaged more than 1,200 buildings and homes.

Two of the blazes, called the SCU and LNU Lightning Complex fires, are among the top 10 largest in California’s history. As of Tuesday morning, they have burned more than 700,000 acres combined around the Bay Area and are 15% and 27% contained, respectively, according to Cal Fire.

“With the clear air, we were able to fly a lot more aircraft,” Mark Brunton, Cal Fire's operations chief, said Monday after helicopters dropped 200,000 gallons of water on another nearby fire – the CZU Lightning Complex – which is burning in San Mateo and Santa Cruz Counties. 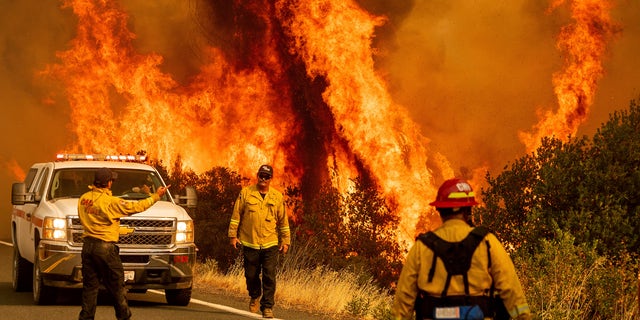 In addition to better weather, fire crews, along with bulldozers and other equipment, have been arriving from other states.

“I think we’re going to have more days like this and hopefully get us closer to the end of suppressing this fire,” Brunton added.

But officials are warning that the danger is far from over and told residents to stay out of evacuated areas.

Six people who returned to a restricted area south of San Francisco to check on their properties were surprised by fire and had to be rescued, the San Mateo County Sheriff’s Office says.

Looters have been warned they’ll be arrested, and some people have been taken into custody, including a man found with $5,000 in his car, authorities said. Fire burns in the hollow of an old-growth redwood tree in Big Basin Redwoods State Park, Calif., on Monday. The CZU Lightning Complex wildfire tore through the park but most of the redwoods, some as old as 2,000 years, were still standing. (AP)

An estimated 170,000 people still remain under evacuation orders and tens of thousands of homes remain under threat from wildfires around the state.

Gov. Gavin Newsom said that at this time last year, California had seen about 4,300 wildfires that burned about 87.5 square miles, while the toll this year is 7,000 fires and nearly 2,200 square miles.

“We are dealing with different climate conditions that are precipitating in fires the likes we haven’t seen in modern recorded history,” he said Monday.

The fires are blamed for at least seven deaths, among them 70-year-old Mary Hintemeyer, her boyfriend Leo McDermott, and his son, Tom, said Hintemeyer’s son, Robert McNeal.

McNeal told KPIX-TV that he lost contact with his mother last Tuesday night as the fires sped up. He said his mother had tried to go into town earlier that day but turned back at a roadblock where authorities said if she went through she wouldn’t be allowed back. She returned home to get her boyfriend, who was in a wheelchair. 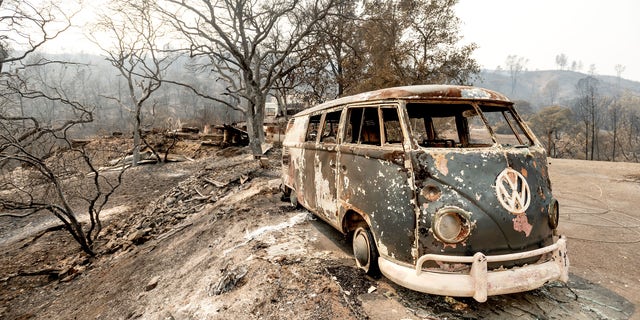 Following the LNU Lightning Complex fire, a scorched VW Microbus rests in a driveway of the Spanish Flat community in Napa County, Calif., on Monday. (AP)

Authorities found their remains among the ruins on the Napa County property Wednesday, he said.

“Just get out, don’t wait,” McNeal told the TV station, urging people to follow evacuation orders. “If you think it’s going to be too much to get your sprinklers on before you get out of there, forget those too. Forget it. Get out. Just get out. It ain’t worth it.”

Meanwhile, a grove of old-growth redwoods — some of them 2,000 years old and among the tallest living things on Earth – managed to survive a fire that swept through the Big Basin Redwoods State Park last week.

An Associated Press reporter and photographer hiked the renowned Redwood Trail there Monday and confirmed most of the ancient redwoods had withstood the blaze. 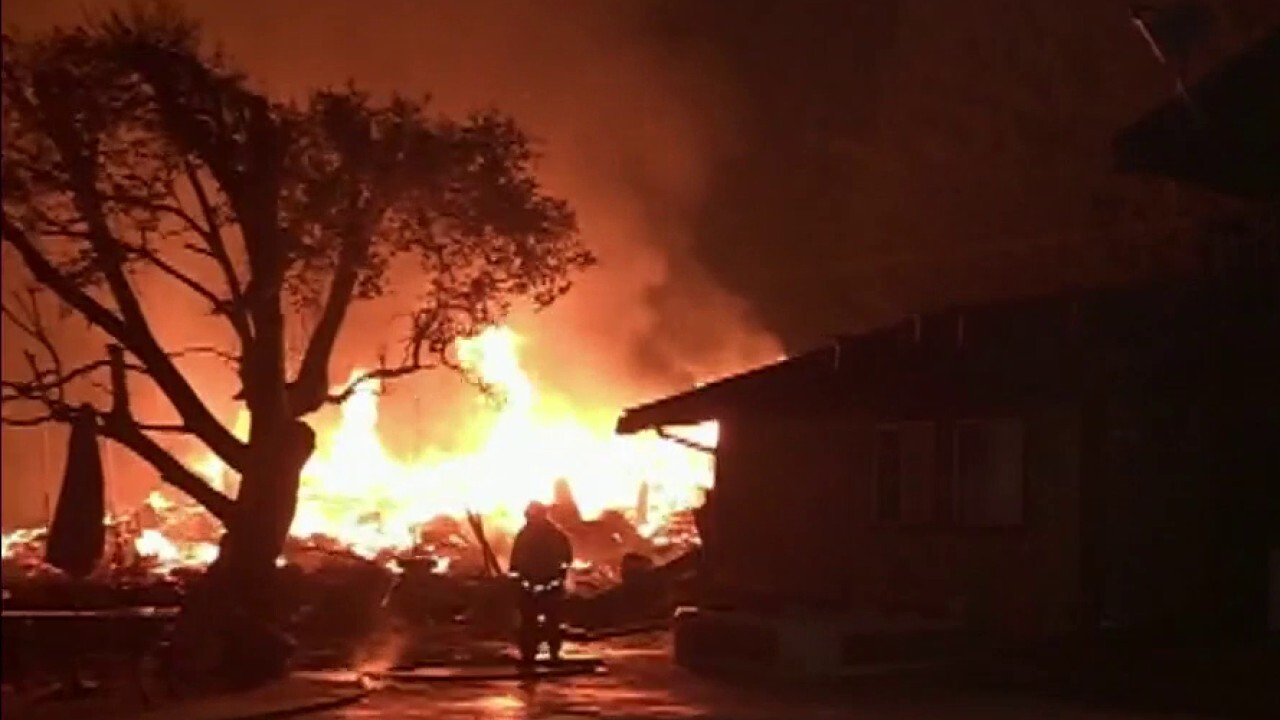 “That is such good news, I can’t tell you how much that gives me peace of mind,” said Laura McLendon, conservation director for the Sempervirens Fund, an environmental group dedicated to the protection of redwoods and their habitats.

The historic park headquarters is gone, as are many small buildings and campground infrastructure that went up in flames as fire swept through the park about 45 miles south of San Francisco.

“But the forest is not gone,” McLendon said. “It will regrow. Every old growth redwood I’ve ever seen, in Big Basin and other parks, has fire scars on them. They’ve been through multiple fires, possibly worse than this.”

When Big Basin opened in 1902 it marked the genesis of redwood conservation. The park now receives about 250,000 visitors a year from around the world, and millions have walked the Redwood Trail.

Related posts:
Manchester United's Harry Maguire guilty of assault, attempted bribery after fight on Greek island: report
I’m dreading going back to work next week after being on furlough for so long
Popular News
Starving rats attacking PETS after struggling to find enough food outside restaurants due to lockdowns
27/09/2020
Man Utd wonderkid Ramon Calliste, called ‘the next Giggs’, now owns luxury watch business and makes £5m a year – The Sun
26/03/2020
Megan Thee Stallion Addresses Criticism Over Twerking: ‘I Love to Shake My A**’
26/03/2020
Police guard shops to stop coronavirus panic-buyers and enforce social distancing – The Sun
26/03/2020
Coronavirus: Good Morning Britain’s Dr Hilary reveals ‘game-changing’ self-testing kit
26/03/2020
Recent Posts
This website uses cookies to improve your user experience and to provide you with advertisements that are relevant to your interests. By continuing to browse the site you are agreeing to our use of cookies.Ok