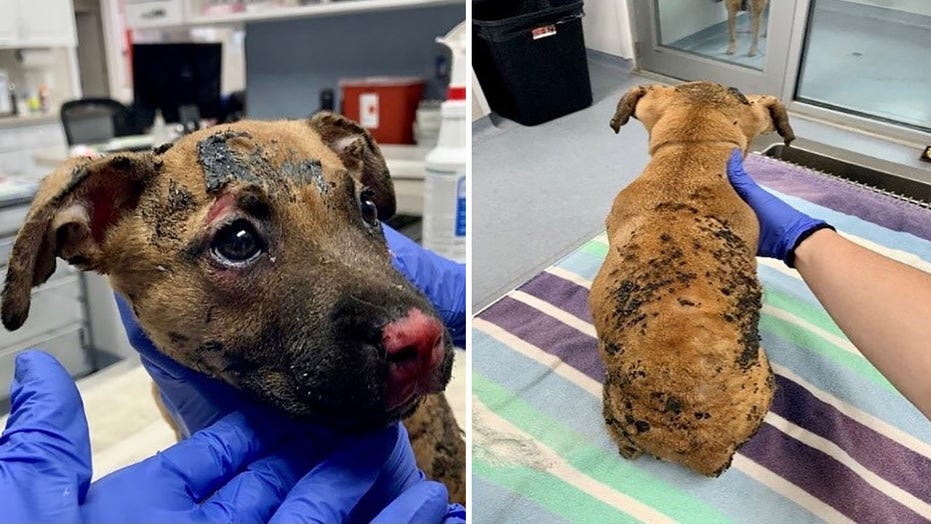 A puppy put in a cage and set on fire at a park in Ohio over the weekend is recovering from its burns while authorities search for the person responsible, fire officials said Wednesday.

Firefighters responded just after noon to a fire at Walnut Hill Park in Columbus on Sunday and found the remains of a plastic cage still burning underneath a tree, Columbus Division of Fire said.

After putting out the fire, officials said firefighters spotted a dog running in the area. The puppy had black plastic melted on her back.

"As fire investigators, this is heart-wrenching and sickening for us,” investigator Mike DeFrancisco told WBNS-TV. “We see a lot of bad things on a daily basis, but this has cut a lot of our people to the core." 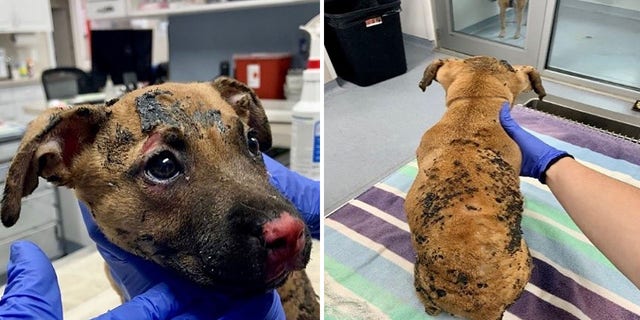 The blond and yellow puppy was found with black plastic melted on her back and taken to an animal hospital.
(Columbus Division of Fire)

The pooch was rushed to the Diley Hill Animal Medical Center and treated for burn injuries.

The puppy “is doing remarkably well," and has been adopted by staff at the animal hospital, fire authorities said.

Fire investigators are working with the Columbus Humane Society to find the suspect responsible for injuring the puppy. Authorities have asked the public to help identify the dog or its former owner.

Related posts:
Stevie Nicks Says Botox Made Her Look Like 'Satan's Angry Daughter'
Sue Bird said that the notable absence of fans in the WNBA bubble made the Seattle Storm’s 2020 championship ‘not quite as fun’
Popular News
Watch England’s Vitality Roses taking on New Zealand, live on YouTube
30/10/2020
Man Utd wonderkid Ramon Calliste, called ‘the next Giggs’, now owns luxury watch business and makes £5m a year – The Sun
26/03/2020
Megan Thee Stallion Addresses Criticism Over Twerking: ‘I Love to Shake My A**’
26/03/2020
Police guard shops to stop coronavirus panic-buyers and enforce social distancing – The Sun
26/03/2020
Coronavirus: Good Morning Britain’s Dr Hilary reveals ‘game-changing’ self-testing kit
26/03/2020
Recent Posts
This website uses cookies to improve your user experience and to provide you with advertisements that are relevant to your interests. By continuing to browse the site you are agreeing to our use of cookies.Ok