Pretty pastel colours were spotted in the morning skies as most of the UK looks forward to a clear and bright day as the nation falls silent to mark Armistice Day.

But forecasters warn the country is set for a weekend washout with up to two inches of rain expected to fall in one day on western parts of the country.

Scotland had a taste of the deluge today as forecasters warned the country is set to be battered by rain as gales and heavy showers blow in from the north west.

Meteorologists have put a weather warning in place for the whole country, with heavy rain expected to flood homes and businesses across Scotland. 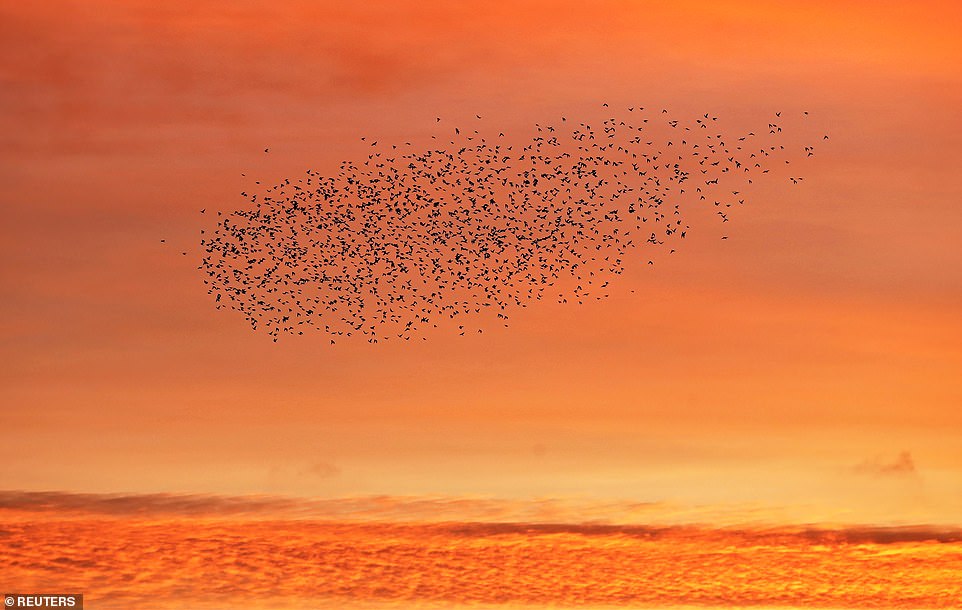 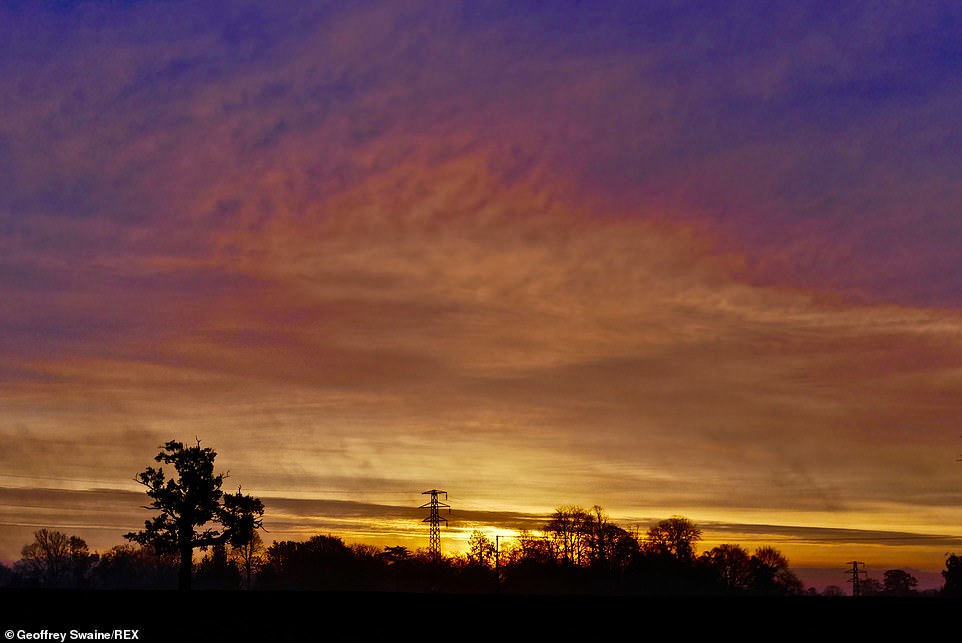 Pastel colours were also on display in Playhatch, Oxfordshire, as the sun broke over the dawn sky 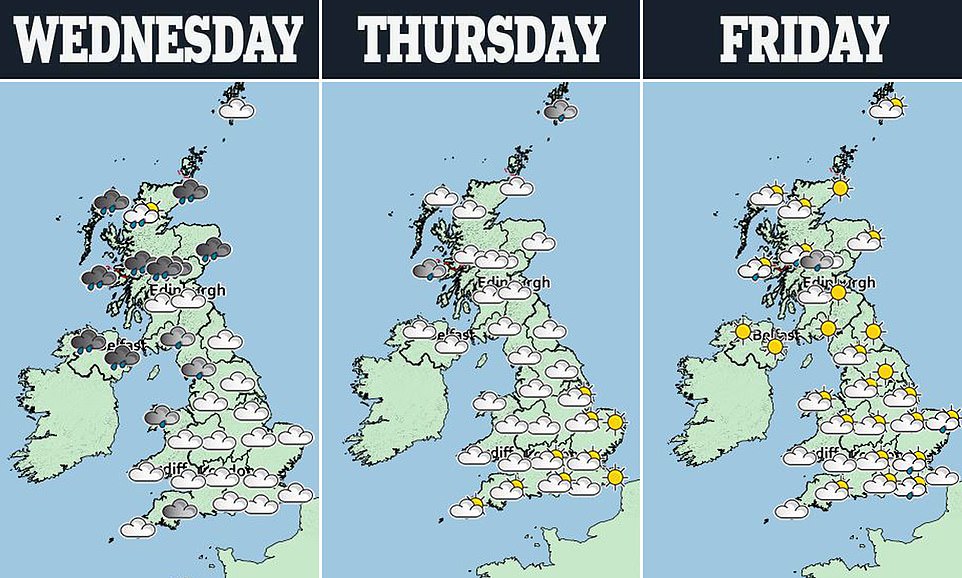 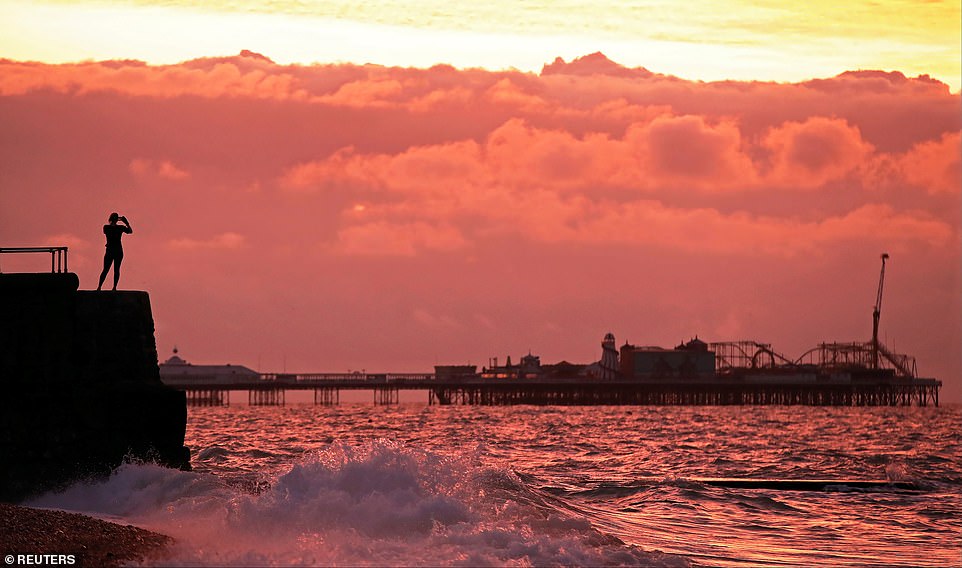 The rest of the UK is set to be spared from the downpour, with early morning rain in western parts of England and Wales set to clear as the day progresses.

‘Cloudy skies will greet most of us as we wake up on Wednesday morning. However, apart from a few showers, England and Wales will stay largely dry and mild,’ The Met Office posted on Twitter.

The colourful sunrise was seen over much of England this morning and a photographer in Oxfordshire captured the clouds turning a bright shade of pink.

The scene over Brighton’s Pier on the south coast was also a stunning deep red display, ehanced by a flock of starlings moving together across the dawn sky.

Other parts of the UK woke up to fog, but forecasters said the mist and low cloud would clear as the day went on.

Apart from a couple of showers blowing in from the west – part of the same weather system covering Scotland in heavy rain today – the country is set to enjoy a clear bright day. 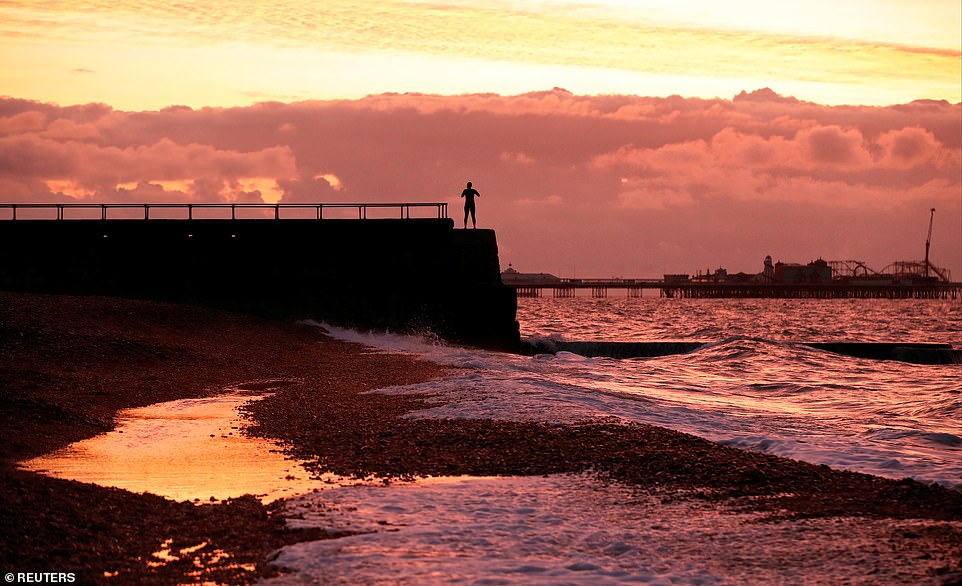 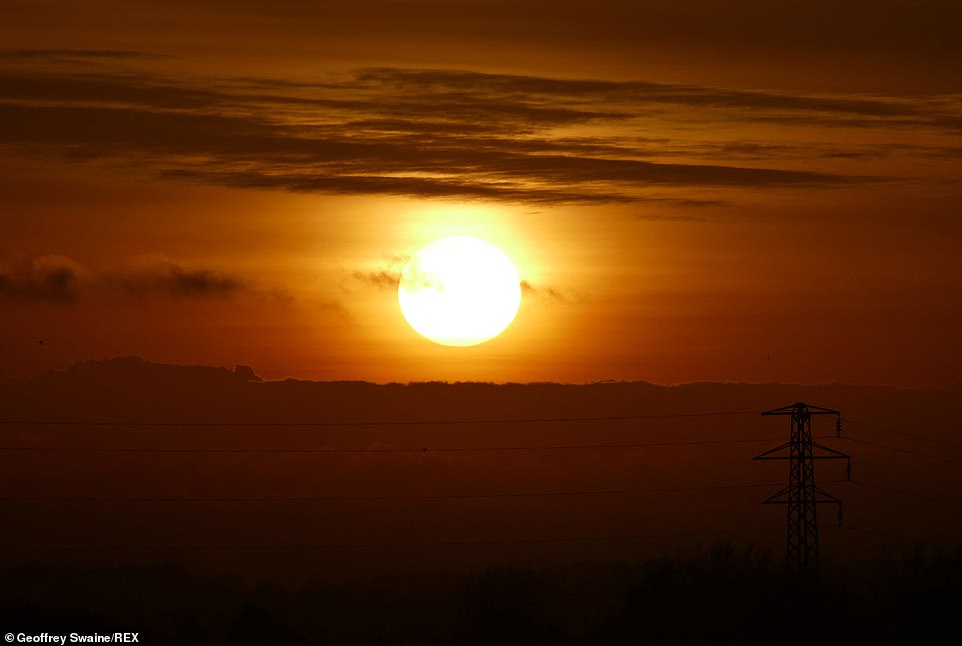 Much of the country saw an impressive sunrise today on November 11, the day where fallen soldiers are commemorated across the UK

‘There’s an active weather front coming from the west and working its way east overnight across southern parts of the UK and that will be bringing a band of very heavy rain. One that goes it will clear again before the arrival of another band of weather.

‘In north west Scotland they have their own particular concern with heavy rain and winds. But the rest of the country as this pattern of wet and dry continues until the weekend.’

But the expert warned that the country is set for a downpour on Saturday and Sunday with ‘intense bursts of rainfall’.

‘The weekend does look quite lively,’ he added. ‘On Saturday there’s likely to be some quite heavy showers and then on Sunday it looks like there will be another front coming through bringing heavy rain and some of that could be given the conditions, quite intense bursts of rainfall. Just in time for the weekend.’

‘There are bands of rainfall coming through for the next four or five days, but there will be brighter interludes coming through.’

The forecasters said they would consider issuing weather warnings if the risk of flooding is elevated due to the rainfall. 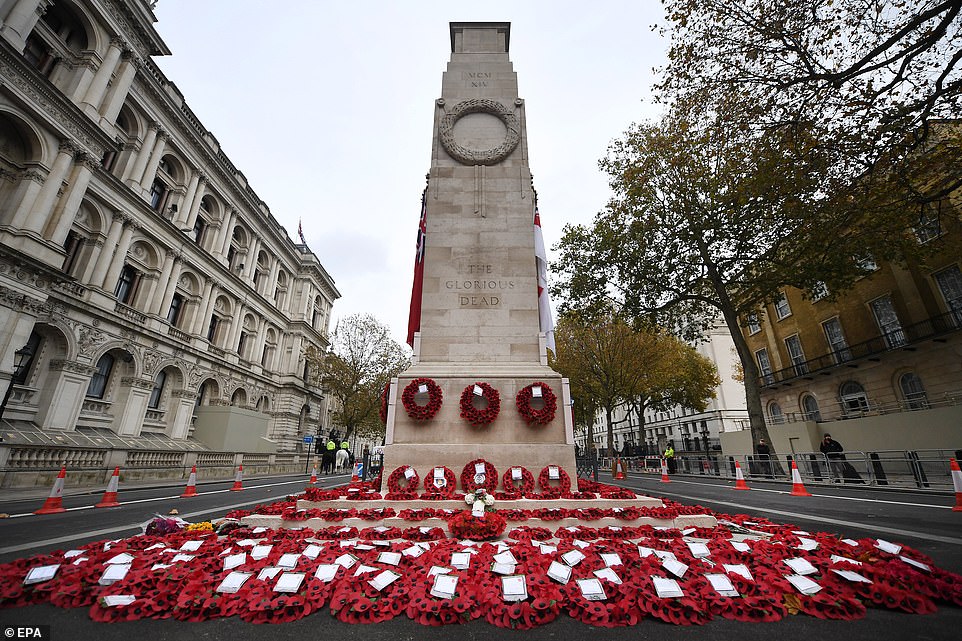 The nation will fall silent today at 11am to remember the fallen soldiers on Armistice Day. Pictured: London’s cenotaph this morning 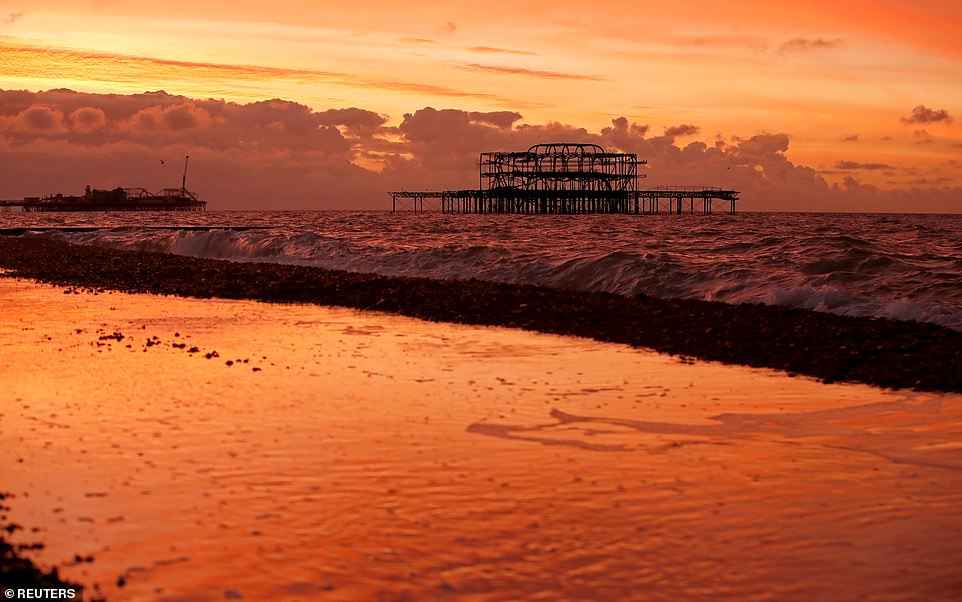 Western areas of England and Wales could see between 40 to 60mm of rainfall on Saturday, and potentially another 20mm the following day.

Other parts of the UK are set to see between 10 and 20mm fall in the downpour.

But the weekend washout was not set to last as the weather is set to clear on Monday, bringing warmer temperatures next week.

Mr Madge added: ‘Next week there’s the potential for very warm air to come up as a result of the hurricane season dominating the tropical Atlantic. They bring lots of moisture and warm air.

‘The system Theta next week could track up some warm air from Madeira and the Azores. There’s the potential for next week to see some very high temperatures for November.’

With the mercury set to rise to 13C in parts of the UK and 14C in the south west, it is the latest in a series of days that have seen higher than average temperatures for this time of year.

Encouraging people to get out and enjoy the clamer weather while it lasts, Mr Madge added: ‘The message is if people want to exercise and get outside look at the forecast and time it for dry conditions.’

Related posts:
The Hot List: Get yourself organised with these nifty storage solutions
Football fans go through anti-Covid disinfection pods
Popular News
Celebrity Prisoners' 2020 Thanksgiving Prison Meals Revealed
26/11/2020
Man Utd wonderkid Ramon Calliste, called ‘the next Giggs’, now owns luxury watch business and makes £5m a year – The Sun
26/03/2020
Megan Thee Stallion Addresses Criticism Over Twerking: ‘I Love to Shake My A**’
26/03/2020
Police guard shops to stop coronavirus panic-buyers and enforce social distancing – The Sun
26/03/2020
Coronavirus: Good Morning Britain’s Dr Hilary reveals ‘game-changing’ self-testing kit
26/03/2020
Recent Posts
This website uses cookies to improve your user experience and to provide you with advertisements that are relevant to your interests. By continuing to browse the site you are agreeing to our use of cookies.Ok