Boss of collapsed road-building firm was accused of siphoning cash

A company director who owes businesses $20 million after his company went broke on an Andrews government road project has been accused of siphoning cash from a company he partly owned.

More than 200 civil construction firms were left thousands of dollars out of pocket on the $1.8 billion Western Roads Upgrade after a major subcontractor on the job, Civilink, ran out of funds and quit last year. 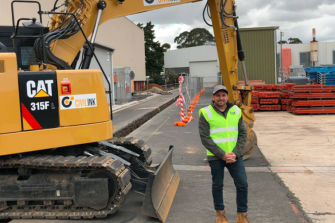 Rick D’Ovidio, director of Civilink, which has gone into liquidation.

Liquidators say Civilink director Rick D’Ovidio may have traded while insolvent when working on the taxpayer-funded road project in Melbourne’s west. His company owes the Australian Taxation Office more than $350,000.

The Age can reveal Mr D’Ovidio was involved in a dispute over the use of company funds in the years leading up to signing a $40 million contract on the Andrews government job.

In 2016 he was sued in the Supreme Court by his former business partner for allegedly making unauthorised payments to Mr D’Ovidio’s own separate company.

The money was paid to a company called Protastruc, which Mr D’Ovidio and the employee set up in late 2012, just a few months before the invoicing began.

There was no record of the company tendering for work with Fortunato, the group alleged.

“I had no knowledge of the payments at the time they were made,” Mr Fortunato said in an affidavit lodged with the court.

Protastruc went into voluntary liquidation in March 2016 – a month after Mr Fortunato became aware of the invoicing.

The Fortunato Group also alleged Mr D’Ovidio was given an advance of $300,000 to spend on renovations of his Moonee Ponds home, which was not repaid.

Mr Fortunato claimed these costs were being recorded as payment for work done on a Melbourne Airport upgrade.

Mr D’Ovidio argued in defence that he had struck a deal with Mr Fortunato to use company cash to fund his home renovations. Under the agreement, Mr Fortunato could take out an amount of cash at a later date that reflected his shareholding, Mr D’Ovidio said.

Two accountants confirmed this version of events in affidavits lodged with the court. They said an agreement had been reached between the directors that allowed Mr D’Ovidio to spend up to $300,000 on his home renovations, with one suggesting this was effectively a bonus.

Mr D’Ovidio denied the allegations about payments made to Protastruc. The case did not go to trial, so no findings were made against Mr D’Ovidio.

The Fortunato Group would not provide comment for this article. Mr D’Ovidio did not respond to The Age’s questions.