Bored Brits reveal the creative things they have done during lockdown

As the nation remains in coronavirus lockdown, householders have been taking to social media to share the creative activities they have pursued while in the confines of their home.

Online users have been taking to Twitter to share the weird, wonderful and sometimes bizarre hobbies that have kept them entertained as the country tries to grapple with the spread of COVID-19.

The interesting ideas come in the same week former aide to Tony Blair, Alastair Campbell, revealed that during his hours at home he had taken up hoovering for the very first time.

Speaking to GQ about the 20 things he had done during the lockdown, the former politician said that he was ‘not proud’ to admit it but it was the first time he had ever dusted the spines of his books and wiped them down with a cloth. 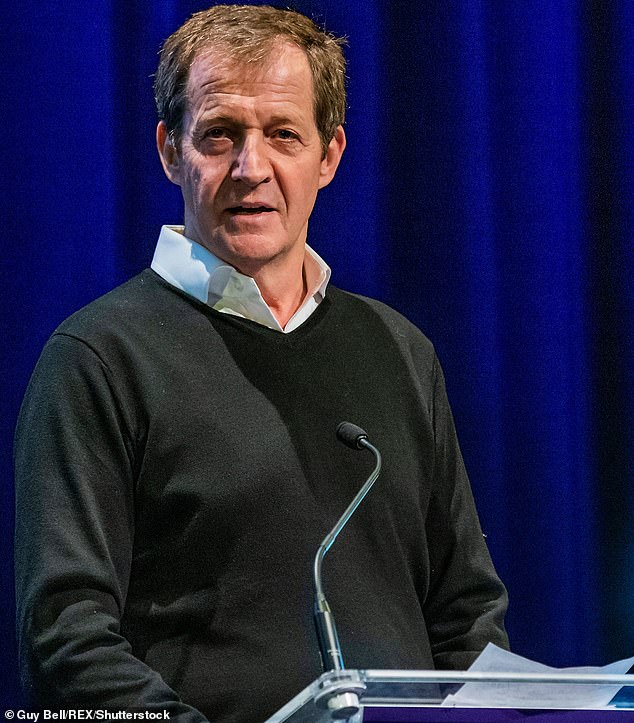 This week the former aide to Tony Blair, Alastair Campbell, revealed that he had taken up hoovering for the very first time

Mr Campbell went on to describe how he had rearranged his bookshelves, written advice to the Prime Minister Boris Johnson, discovered that when the dishwasher door was slightly open it meant that the previous load had been cleaned and had become ‘utterly obsessed with trees and birdsong’.

Joining in on the fun, social media users have since been making their own admission on the activities they taken after the country was plunged into lockdown.

While another person admitted they had begun to notice details in their home they had never spotted before, writing: ‘I haven’t spent more than a fortnight in this house in the last 25 years. I was born here and the lockdown means I keep noticing things for the first time in years.

‘This room was my nursery until 1965 and is now a dressing room, but my childhood Beatrix Potter frieze remains.’

Meanwhile another added: ‘I’ve polished the toaster, done a lightbulb and battery check and just filled the bird bath.’

And another person admitted: ‘Silver linings to the lockdown, picked up a paintbrush for the first time in years.’ 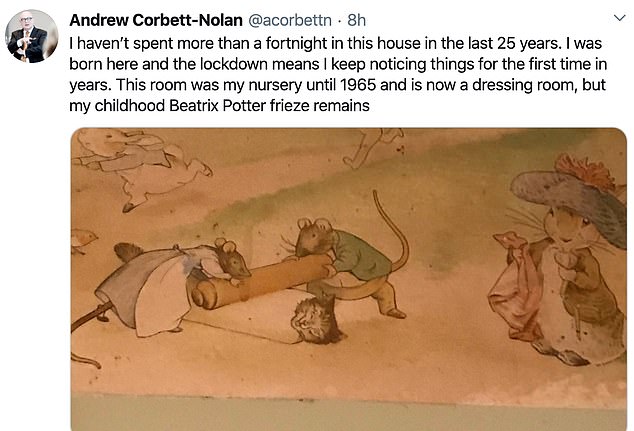 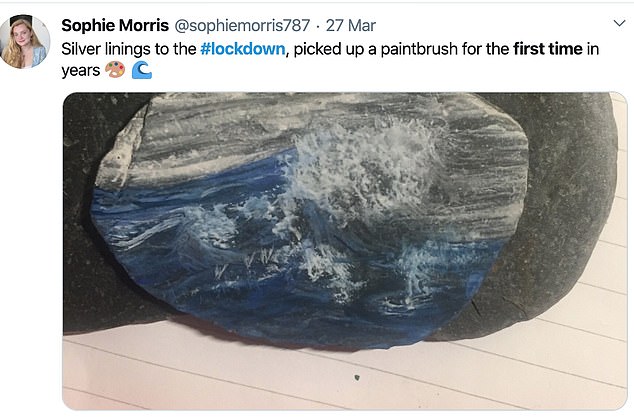 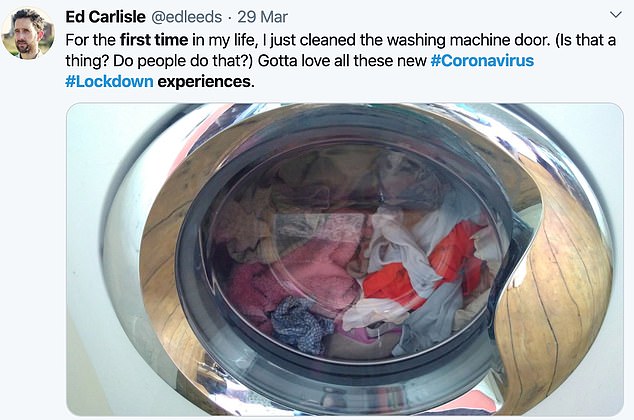 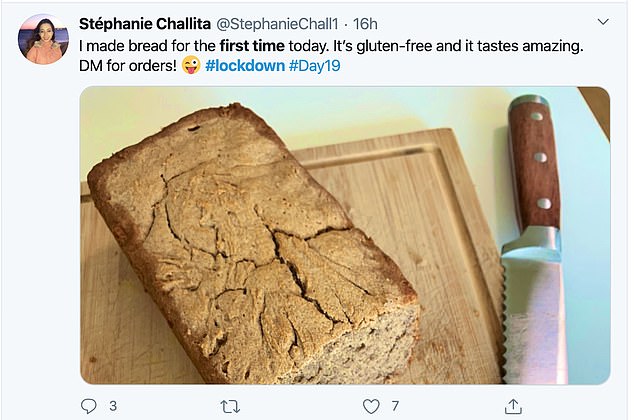 One social media user admitted they had decided to grow facial hair for the very first time and wrote: ‘#Lockdown #boredom is taking hold…decided since I can’t get a haircut I would shave…got the idea to try a #moustache…then well.

Elsewhere another person wrote: ‘Just discovering @Breaking Bad for the first time during #lockdown. Very late to the party but amazing.’

Another Twitter said they had taken to the kitchen to try making banana bread for the very first time in their lives.

Deciding they too wanted to share their experiences of lockdown with the world one social media user said: ‘Day six of lockdown, I logged into my Facebook account for the first time in years.’ 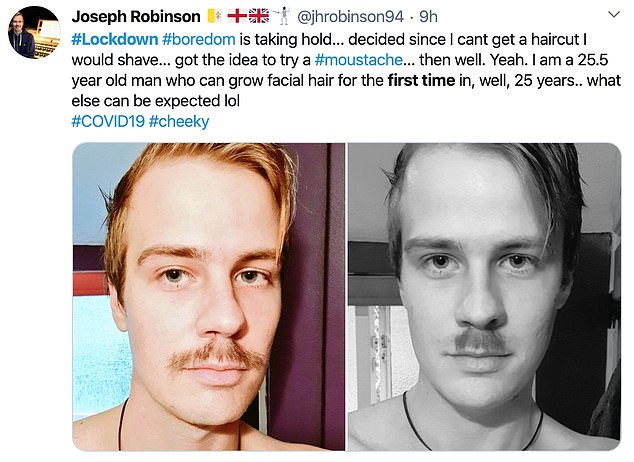 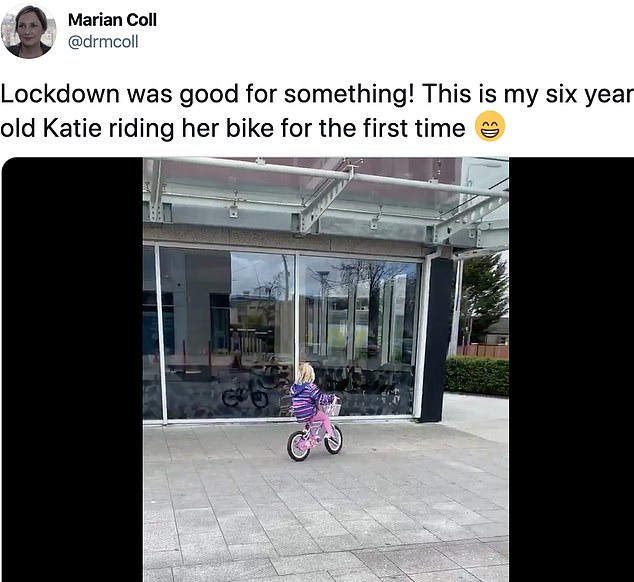 Also deciding to spruce up their home, one user admitted that after cleaning their windows they could not see the trees

While another revealed: ‘This coronavirus lockdown prompted me to try two things I’ve never done before: bake my grandma’s buns and French braid my own hair. Neither are perfect, but I feel happy.’

Meanwhile one proud mother told social media users her six-year-old daughter had finally had a chance to ride her bike for the very first time.

In a tweet the mother wrote: ‘Lockdown was good for something! This is my sic-year-old Katie riding her bike for the first time.’ 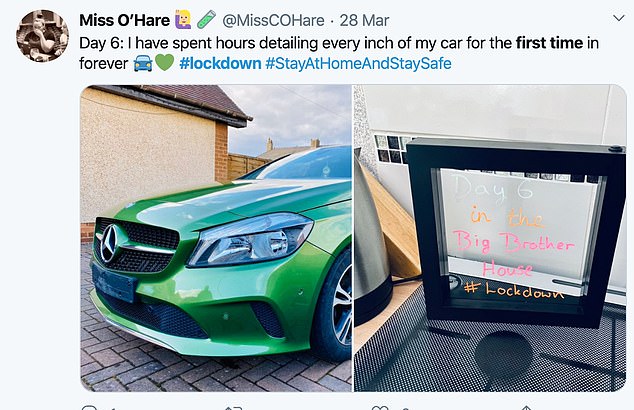 Deciding it was time to clean their home, one person cleaned the patio windows the first time they were asked 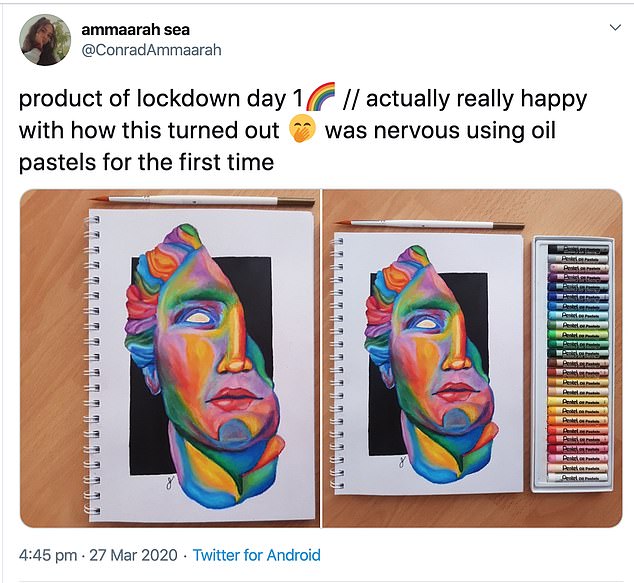 Deciding to tune into their artistic side, one person decided to try creating a work of art using oil pastels 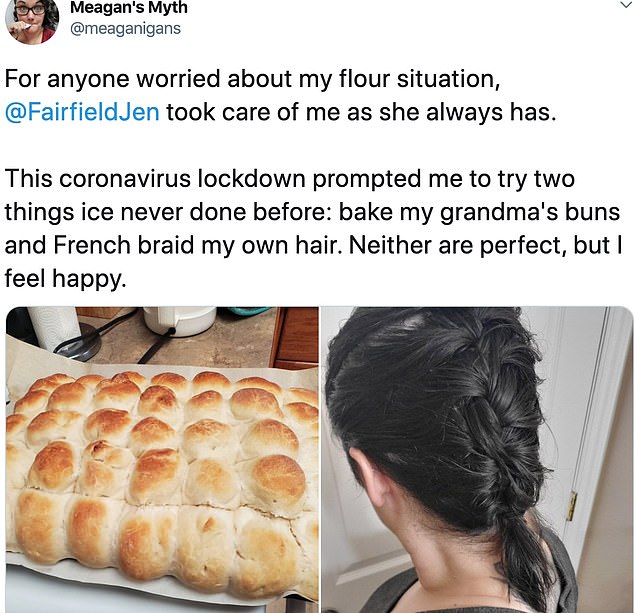 In other parts of the world one person, from Alberta, decided to try and perfect the skills at both baking and French braiding their hair

While one father, from Ontario, admitted they had allowed their daughter to practice facials on him 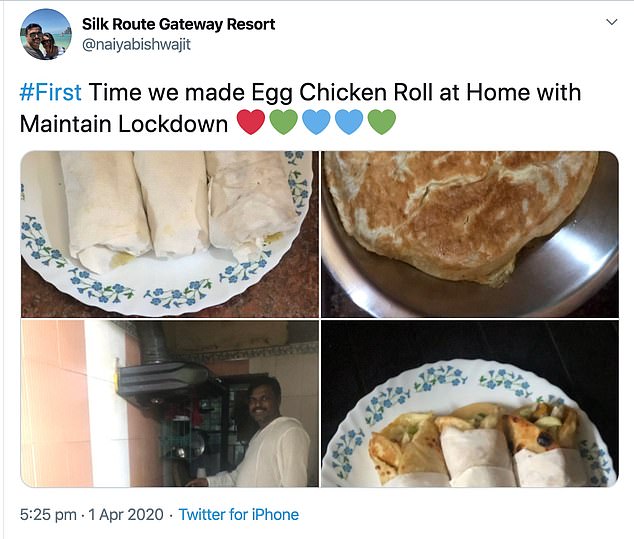