As confusion reigns about the sudden NSW border closure and conflicting health advice for returning Victorian travellers, some stranded north of the Murray cannot get home at all.

Adam Laws, from Eltham North, is one of many Victorians stuck in NSW with no way of getting out after the border was slammed shut by the state government on Friday night.

Victorian travellers to regional NSW were allowed back into the state before Friday's 11.59pm cut-off, but those who had been in the "red zone" over the Christmas period, which included Greater Sydney, were unable to apply for a border crossing permit. 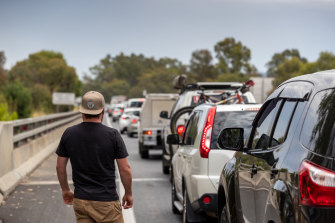 Vehicles queue to cross the NSW-Victorian border at Albury on Friday.Credit:Jason Robins

Mr Laws was in Sydney to visit and care for his sick mother for the first time since her cancer diagnosis earlier in 2020. He arrived in Sydney on December 20 – the day Victoria announced it was closing its border to those in the red zone.

At that stage, Victorians were told they would need to complete 14 days in hotel quarantine when they returned. That option has since been taken away.

"It seems crazy that Victorians aren't allowed to go home," he said. "Is it two weeks, four weeks, six weeks? It's completely impossible to guess."

Some Victorians who want to return from NSW can still do so, but they will need to get an exemption approved by the Chief Health Officer.

The exemptions are "very rare" and handed out only in limited circumstances, according to the Department of Health and Human Services.

Testing chief Jeroen Weimar said on Saturday that exemptions would take 24 to 48 hours to approve.

However, readers have told The Age they have waited days to find out if they are successful, with limited communication from Victoria's Health Department.

"You will need to provide the necessary evidence and documentation to demonstrate why you need to come back into Victoria," Mr Weimar said.

He said those who wanted an exemption must ring the Department of Health and Human Services hotline. Callers to the hotline on Saturday were not getting through due to high demand.

Mr Laws said he would seek permission to come home so his son could attend his first day of prep later this month.

"I don't know how much weight our case would have," he said. "We were here to support Mum, we didn't have a choice to turn around. But I recognise it's self-inflicted, we saw the advice and we chose our destiny."

According to Health Department advice, that meant she was supposed to get tested and self-quarantine for 14 days.

However, she said a police officer on the checkpoint told her she did not need to isolate and to get a COVID-19 test for her "peace of mind".

When she got tested in Melbourne, staff told her she was supposed to be in quarantine. For clarification she called the Department of Health and Human Services hotline, which confirmed that advice.

"It's been a 48-hour ordeal of back and forth and confusing information," she said.

Related posts:
Ashley Banjo leaves fans in stitches as he carries daughter like rag doll
Can YOU find the single four-leaf clover?
Popular News
Southampton vs Arsenal FREE: Live stream, TV channel, team news and kick-off time for TODAY'S FA Cup fourth round match
23/01/2021
Man Utd wonderkid Ramon Calliste, called ‘the next Giggs’, now owns luxury watch business and makes £5m a year – The Sun
26/03/2020
Megan Thee Stallion Addresses Criticism Over Twerking: ‘I Love to Shake My A**’
26/03/2020
Police guard shops to stop coronavirus panic-buyers and enforce social distancing – The Sun
26/03/2020
Coronavirus: Good Morning Britain’s Dr Hilary reveals ‘game-changing’ self-testing kit
26/03/2020
Recent Posts
This website uses cookies to improve your user experience and to provide you with advertisements that are relevant to your interests. By continuing to browse the site you are agreeing to our use of cookies.Ok