Miami: Donald Trump severed ties with Jeffrey Epstein after the disgraced financier hit on the teenage daughter of a Mar-a-Lago member, threatening the Trump brand of glitz and glamour, according to a new book published about the US President's Palm Beach club.

Trump publicly disavowed Epstein a day after the financier's arrest on July 11, 2019, saying in the Oval Office that the two hadn't spoken in 15 years after a falling out. He has also claimed that Epstein was never a member of the resort.

"I'm not a fan of his," the President said then, never disclosing why they fell out. 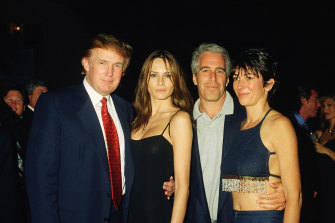 But a new book out on Tuesday titled The Grifter's Club says the late paedophile was indeed a member and that the two stopped talking – and Epstein was kicked off the rolls and banned from Mar-a-Lago – following the incident with a club member's teen daughter.

Another club member explained that Trump "kicked Epstein out after Epstein harassed the daughter of a member. The way this person described it, such an act could irreparably harm the Trump brand, leaving Donald no choice but to remove Epstein," said Sarah Blaskey, a Miami Herald investigative reporter who co-wrote the book with Miami Herald journalists Nicholas Nehamas and Jay Weaver and Caitlin Ostroff of the Wall Street Journal. "The Trump Organisation did not respond to our requests for comment on this or other matters." 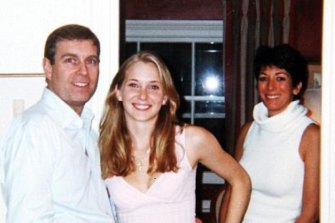 Prince Andrew pictured with Virginia Roberts Giuffre in 2001 at the home of Maxwell (right) in London.

A widely published photo shows Giuffre, who now lives in Australia, and the prince, who appears to have his arm around the teenager's bare midriff, together with Maxwell, who has pleaded innocent. But there's another overlap between Epstein's world and Mar-a-Lago.

Several models who worked for Epstein associate Jean-Luc Brunel, who allegedly helped procure for him underage girls, tell of being taken to swank parties at Mar-a-Lago.

Zoe Brock, a New Zealander who quit Brunel's agency in Paris in 1991 after, she says, she was on the receiving end of his unwanted sexual advances at age 17, still has the wristband from when, while with another agency, she and other young girls and women were taken together on a bus from Miami to Mar-a-Lago in 1998.

Brock was represented by Next, a modelling agency that only last year was revealed by the Daily Beast to have been – unbeknown to Brock – partially owned by Brunel. At 24, she was one of the eldest women on the bus to Mar-a-Lago; many she believes were underage. Brock said she had been pressured by the agency to attend against her wishes and was paid to be there. Once they arrived, she and the other models were required to wear candy cane-striped wristbands, although it was not Christmas season.

"The only people wearing them were the models. A busload of girls, some of whom were underage, shipped to a party and made to look obvious. Clearly, we were meat. None of the other guests were forced to wear anything so tacky," Brock said in an interview from New Zealand.

The party was in the late autumn or early winter, during what models call "the season", a period where it is too cold to do beach shots in most places other than Miami. Brock said she was given a spiked drink at the party and, after recovering, demanded to be taken home immediately. Despite being ill, she was initially told she had to stay until 3am when the bus was due to depart.

After accusing Mar-a-Lago of "kidnapping" her, she claims the club found her a chauffeured car and got her back to Miami Beach very swiftly.

The Trump Organisation did not respond to a request for comment on her allegation. Brunel, who in the past has denied wrongdoing, has disappeared from sight since Epstein's arrest.

After learning last year that the modelling agency back then was owned by Brunel, Brock sees the Mar-a-Lago trip in a clearer light.

"It makes perfect sense to me that Jean-Luc owned the agency that was being paid to send girls there. That was his MO [modus operandi]," Brock said of Brunel. "Let me send pretty young things to grotesque, rich, old perverts and profit off it."