At least a dozen people were arrested in Seattle — and two vehicles were impounded — Monday after a group of people showing their support for Black Lives Matter blocked a freeway, causing traffic delays throughout the afternoon.

A video showed troopers with Washington State Patrol attempting to usher a group of people holding hands and sitting down off of the I-5 North collector-distributor road, all while afternoon traffic was forced to a standstill. The letters “BLM” could also be seen written across the roadway in what authorities confirmed with Fox News was spray paint.

The incident began around 12:30 p.m. local time, when a group of people was seen near James Street walking onto the freeway.

The Washington State Department of Transportation’s traffic account tweeted that the NB I-5 collector-distributor road was closed due to police activity, backing up NB 5 past I-90. Footage broadcast by Q13 Fox showed law enforcement vehicles were later parked in a line on the freeway to separate demonstrators by the median from newly reopened lanes of traffic, as cars slowly passed by.

Trooper Rick Johnson, the spokesman for the Washington State Patrol, confirmed to Fox News on Tuesday that 12 individuals had been arrested and cited for various offenses, including obstruction, disorderly conduct related to blocking a roadway and malicious mischief related to tagging of the freeway.

He said the King County Jail refused to book those individuals — though he was unsure what reason they provided. Those individuals were therefore merely cited and released, Johnson said. Because those people were not booked, Johnson said state patrol cannot release their names until prosecutors formally file charges against them. Two vehicles used to block the freeway were impounded.

Johnson said the roadway had been mostly cleared by 1:30 p.m. Monday. He was the one to initially tweet about the arrests.

“Great job by @wastatepatrol troopers who responded and took care of this situation,” Johnson wrote. “Thanks for those in the backup for your patience.” 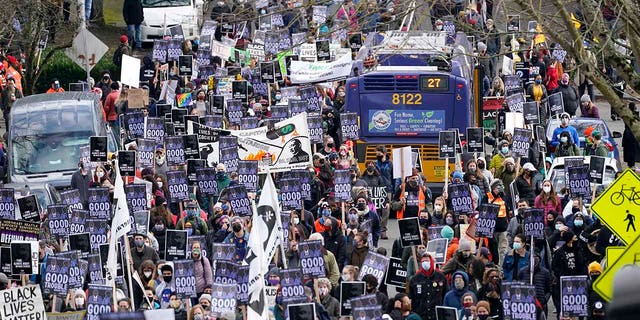 Demonstrators fill a street and march around a bus stopped in the crowd during the 39th annual Seattle MLK Jr. Day March and Rally, Monday, Jan. 18, 2021, in Seattle. The event celebrates the national holiday in honor of the Rev. Martin Luther King Jr.’s birthday and this year’s theme was "Good trouble, necessary trouble," in honor of the words of the late Congressman John Lewis. (AP Photo/Elaine Thompson)

A 13th protester — a 40-year-old woman — was transported to Harborview Medical Center in stable condition, Q13 Fox reported. Johnson told Fox News that that individual was laying down in the roadway and stopped responding to verbal commands, so troopers called in the Seattle Fire Department and she was transported to a hospital to be evaluated. To his understanding, Johnson said he did not believe there was a medical reason for the woman to stop responding, but troopers called in the fire department out of caution.

Johnson could not confirm whether those protesters who blocked the freeway were involved with the march.