New York City: There’s a new soundtrack to life in New York City right now: the wailing of ambulance sirens. At all times of the day and night they can be heard racing through the streets, as paramedics try to save a population being pummelled by the coronavirus.

Life as we knew it here has come to a shuddering halt, practically overnight. Gone are the crowded subway carriages, the honking horns, and the shoulder-to-shoulder bustle of one of the world’s most vibrant cities. 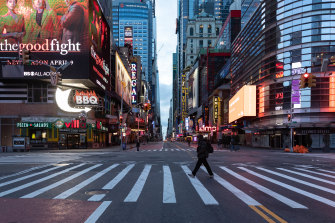 Times Square now stands empty. Grand Central Terminal is deserted at peak hour. The city that never sleeps is unconscious, and the sirens are relentless.

People are scared, and it’s easy to understand why. Each day the state's grim death and infection toll has continued its steady march higher.

The US has now surpassed Italy in the total number of confirmed deaths from the virus, reaching its deadliest day on Friday with 2057 deaths. New York remains the hardest hit state with more cases than any other country in the world.

New York Governor Andrew Cuomo said on Saturday that 783 more people had died, the third straight day the toll had neared 800, taking the total number of deaths in the state to more than 8600.

"You can see that the number is somewhat stabilising, but it is stabilising at a horrific rate," Cuomo said. "These are just incredible numbers, depicting incredible loss and pain."

There are signs of it everywhere here.

It’s still hard to comprehend that a grassy meadow in Central Park has been hastily transformed into a field hospital. So too has the tennis complex in Flushing that should be hosting the US Open in just a few months.

With morgues at capacity, city officials have parked scores of refrigerated trailers outside hospitals to cope with the sheer number of the dead. In one tragic video circulating online, a forklift was shown hoisting bodies onto a trailer in Brooklyn. 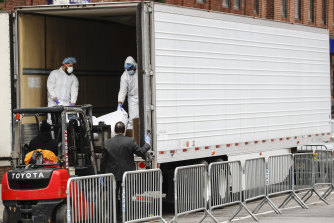 A forklift loads a body onto a refrigerated truck, which is being used as a temporary morgue, in New York.Credit:AP

Meanwhile, city officials have hired labourers to bury some of the dead on Hart Island, off the coast of the Bronx. Drone footage showed burial crews in muddy trenches burying body after body in wooden boxes.

I find myself asking: How did we get here so quickly?

Some people have fled the city, but millions are simply learning to live in lockdown. We're heading into week five now. It’s made that much harder because many apartments here are tiny.

I live near a large park, and try to escape there for some state-approved exercise each day. I run around the outside trails, to encounter fewer people. NYPD vehicles circle the park, using their loudspeakers to tell people to "please keep a safe distance from each other". I run past the local movie theatre that has been closed for weeks. The black and white sign that usually lists upcoming attractions now simply says: "Onward. Be excellent to each other".

Spray painted markers have appeared on the footpath outside the local pharmacy and supermarket, to ensure that people queue at an approved distance from each other. It’s a one-person-in, one-person-out system. There’s no toilet paper or disinfectant wipes here either.

At night the sirens continue to blare, a reminder of the tragedy playing out at hospitals close by. But there’s another sound too, one that has been gathering momentum daily.

At 7pm, those cooped up in their apartments stop what they are doing, stand on their balconies or on their fire escapes, at windows or on rooftops, and begin clapping and hollering and whistling like crazy.

It’s a tiny sign of gratitude for the front-line workers who are in the midst of an unimaginable battle. And for just a few moments, the sirens are drowned out by a more hopeful sound.