Oh Dad, I didn’t know what I’d got until you were gone: BEL MOONEY writes a deeply touching tribute that will resonate with so many on Father’s Day this Sunday

Tomorrow my mother will turn 97 and while we will all be there to celebrate her fine age, the poignant truth is this: someone will be missing from our Sunday lunch table.

For the first time I will have no Dad to present a Fathers’ Day card and gift to (often a bottle of something) — grinning to hear him say, ‘Thank you for your kindness’ in that oddly formal way. No sherry for Dad tomorrow, no special day.

Please don’t protest that Fathers’ Day is a modern, commercial invention (unlike traditional Mothering Sunday), because I don’t care. I welcome any excuses to celebrate . . . and there’s an end to it. 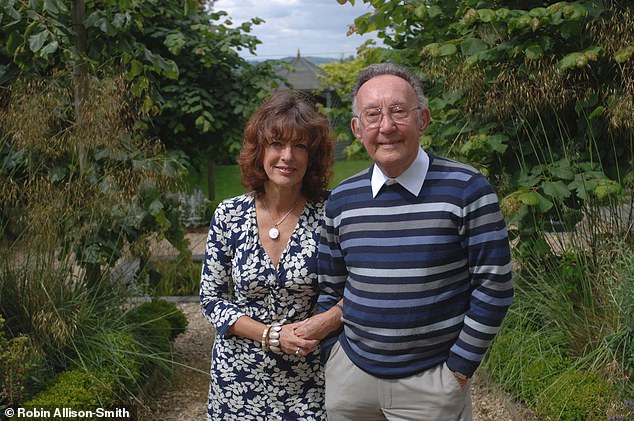 Bel Mooney, pictured left with her father, Edward Mooney, who passed away. Tomorrow she faces the first Father’s Day without her dad

In any case, the idea has roots in the Catholic tradition of honouring St Joseph, the faithful old chap with more than a walk-on job at the Nativity, who escorted his threatened loved ones to Egypt, like so many brave refugee fathers in our own time.

It so happens that Fathers’ Day is celebrated (on different dates) around the world — because, quite rightly, it shines a light on a certain family member who matters.

On clearing my parents’ house, I found so many Fathers’ Day cards inscribed (over many years) with loving messages from me — tokens he could not bear to throw away.

One by one, I looked at the cards before consigning them to the flames in our wood-burning stove, not sadly but reverently, knowing that the ash would be scattered on our garden to nurture the soil, as he nurtured me.

Seeing the Fathers’ Day cards in shops has made me reflect on families and what we inherit. These days I often miss the father, who, truth to tell, could be very annoying, especially once dementia took hold — but to whom I owe so much of what I am. I treasure the childhood memories of him taking me to bookshops and still possess precious volumes dated 1958 and painstakingly inscribed with our then address: 24B The Green, Liverpool 13.

He loved the public library, and I picked up his enthusiasm for knowledge at his knee. Oh, I owe him. 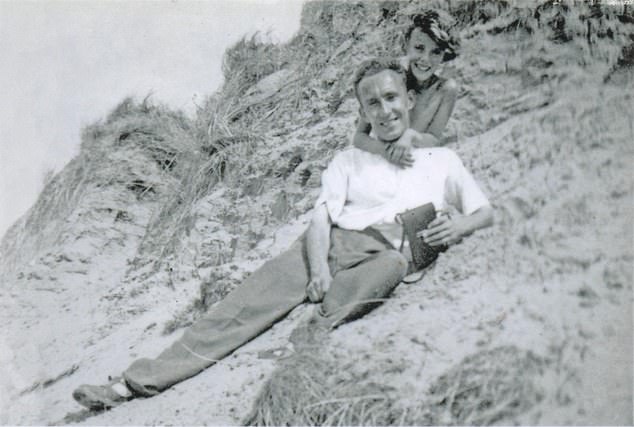 Here, Edward Mooney is photographed with Bel on Ainsdale Beach in Liverpool in 1954

‘Mouse’ he called me — and he would be the one I’d yell for when nightmares stalked my bedroom. He reassured me that the thunder was just the clouds bumping together — a great big game in the sky. I still like to imagine this.

My father’s stories of wartime were endless — and interminable. Today, more patient now he’s dead, I think of the teenager who joined up (he was honest about it) simply to get ‘a motorbike and a gun’ and rode with a dispatch bag through the blacked-out streets of London, probably experiencing real fear for the first time.

As an adult, I came to realise that the camaraderie of the Signals Corps was probably the last time he felt free — for by 1946 (age 24) he was married with two children, living with his parents and desperate to get a council house in bomb-damaged Liverpool.

His life story echoes that of countless ordinary men, raised to respect their parents, revere the family, buckle down, expect no favours from anyone, clean the family’s shoes, fill the hot water bottles, do the decorating, and aspire to make the best of yourself through that glorious combination of hard work and aspiration.

Love and duty create a set of unassailable values. My father was an intelligent man who did his Higher National Certificate at night school while working at the English Electric Company in the day, putting in extra hours to support his family. I think, with awe, of what he — and my mother — achieved.

His move to white collar from blue was inevitable and a source of pride. He managed to buy a car when nobody else on our estate had one, and spent Saturdays maintaining it, face streaked with oil.

Sundays were for outings to the seaside in that precious car — Dad always putting his family first as so many men have always done, fulfilling (with buckets and spades) that most precious role: fatherhood.

More than ever it is vital to celebrate the nation’s dads. Sadly, many men feel marginalised as the female voice has (rightly) learned to shout very loudly.

The #MeToo and #Time’sUp movements have shone a necessary spotlight on predatory, powerful men, but there’s a danger such a big bandwagon can stereotype the vast majority of decent, hardworking blokes as potential baddies. Which they are not.

Obviously, single mums usually do a terrific job. I’ve known many women who have found themselves bringing up children alone, for whatever reason, yet I cannot think of one who wouldn’t have loved a caring, stable partner to share the childcare burden. 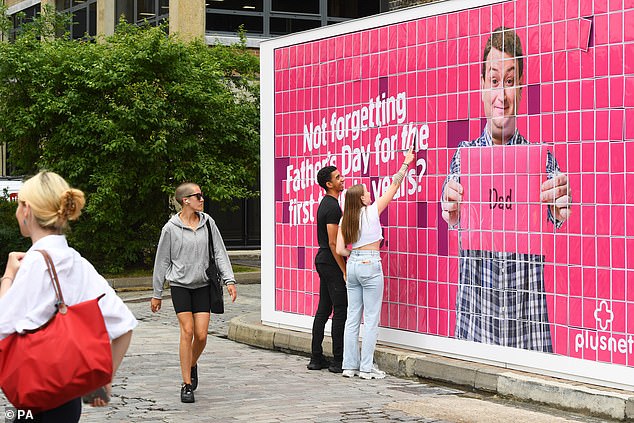 Following her father’s death, Bel Mooney will continue to mourn her late dad, in what will be a bitter-sweet day as it also marks her mother’s 97th birthday

Fate gives us different hands to play, and we’re encouraged to celebrate many kinds of blended families these days.

That’s fine. But I believe we should also sing the praises of tradition, too. Of what used to be called the ‘nuclear’ family.

Oh, I know there are terrible fathers, just as there are neglectful mothers. Some people are not fit to be parents at all. But that’s not what we’re talking about here.

I look at the traditional role fulfilled by my son and son-in-law, and see how the pattern of decent, loving fatherhood is passed down the generations. Sadly, though, it’s often under-valued.

When a marriage breaks up, the law is usually on the side of the mother and it’s not always fair. Over the years, in my role as an advice columnist, I have received many sad, angry and bitter letters from men whose access to their children is cruelly limited and who live in a state of permanent grief.

Families Need Fathers is the lobbying and support organisation set up in 1974 to help these dads and its motto is beautifully simple: ‘Both parents matter.’

That is all I want to emphasise: it’s a fortunate child who grows up with the benefit of good fathering as well as good mothering.

Now that I witness my son and son-in-law realising that the children you love pretty often become a pain in the neck, I recall how arrogant I became when I grew into a teenager and no longer believed in clouds bumping together and did not need poor Dad to shine my shoes any more.

Do all teenagers reject their dads? We’d moved south (marked by my parents’ first mortgage) and from 14 onwards I always felt in cahoots with my mother, who was far more easy-going. At the same time I stormed at my father when he came out with things I disagreed with. Which was often.

I joined CND and The Movement for Colonial Freedom and sported their badges on my grammar school uniform. The teachers didn’t like it — and nor did he.

‘Hands off Cuba,’ I squeaked (to whomsoever might listen) when in truth I knew ‘sweet FA’ about Cuba and America and the Bay of Pigs stand-off, whereas my father kept himself informed and had an enviable grasp of general knowledge. He was wiser than I’d ever know.

But you don’t want to listen to your father when you are a bolshie teenager who increasingly fancies herself as intellectual. You turn your nose up at the world-view expressed in a passion for Queen, country, establishment and family.

But you don’t, do you? You find fault, and never ponder that there’s possibly some right on both sides. And (I speak here from a rueful heart) you never think you will grow into a person who thinks that perhaps that old Dad — the one you laughed or sniped at — would seem right after all. Yes, he made so many mistakes. But so did I. And it amazes me how much I’ve come to agree with things that we once argued passionately about.

Had you told younger me that I’d come to support the Conservative Party because (for all its faults) it represents the things I hold most dear, I would have laughed in your face. If you’d told me how much I would value the Armed Forces . . . ditto. And so on.

When I read the newspapers (and how my father loved his Daily Mail, until failing sight made it a blur) I feel a stab of pain realising what Ted Mooney would make of people opining that biology doesn’t mean anything, that our colonial past was entirely a source of shame, that Black Lives Matter protests would make police officers retreat in our capital city and that ignorant vandals could spray paint ‘Racist’ on the statue of Winston Churchill. He would be outraged.

I reflect on his life: raised in relative poverty by a wonderful father who had fought on the Somme and at Ypres in World War I (and was to be wounded at Dunkirk in World War II) and a Mam who worked in a factory, then cleaned houses for a living.

His parents were proud working-class people who brought up their son to love the monarchy and uphold all the values my father, in turn, handed down to me. My valued inheritance.

Our Queen represents that generation, albeit at the other end of the social scale. Her values of duty, reticence, stoicism, pride, independence, patriotism were shared by Captain Tom, who plodded up and down on his fundraising mission for the NHS. He captured the imagination of a nation under siege from an enemy with no Luftwaffe to threaten, but which nevertheless cowed us into fear.

Oh, Dad would have had no truck with that cowering. Like me, he would have stood strong for freedom. And those immortal words, ‘We shall never surrender.’ It’s why we both voted for Brexit.

I have a heart and a brain (as he did) and know I am truly his daughter. The other day I said to Mum: ‘God, I sound just like Dad!’

Sometimes I wonder if his spirit is crowing: ‘I told you so!’

When I was young and idealistic I became angry at his mistrust of multiculturalism. Now? Let’s just say that there are many aspects which worry me just as much. Grooming gangs in Rochdale are one example. Forced marriages another. I could go on.

My father would say that if people want to come to a country it is imperative that they respect its culture. Why else make a home here?

As for oppressive and, in fact, meaningless gestures such as ‘taking the knee’ at football matches, enough to say Dad would have disapproved, as I do. His kindness was immense; all he wanted was to help those in need and fake virtue does nothing to that end.

Until he was 38 my father lived in the inner city, but in his maturity he cherished the beauty of nature and felt despair at the depredations of humans. His reverence for God, Queen, country and family never left him — and I am proud to say I have inherited those values.

I look up at the clouds and see him there, still worrying himself ‘sick’ (as he’d say) about us all.

And as the stress of those last, very hard, years melts away, I whisper (as I’m sure so many of us do): ‘Thank you, Dad.’