Beast from the East II looms over UK

Beast from the East II looms over UK: Storm Darcy is threatening travel chaos and power cuts in London and South East as forecasters warn Britons to brace for 50mph gales, – 10C temperatures and up to FOOT of snow from today

Snowy blizzards are set to cause travel chaos and power cuts to parts of Britain from today as Storm Darcy rolls in from Russia and Ukraine and brings four days of freezing weather to much of the nation.

The Met Office has warned of ‘significant disruptive snowfall’ in London and the South East of England, especially parts of East Anglia and Kent, as the ‘Beast from the East 2’ coats southern parts of Britain in snow.

Yellow warnings for snow and ice have been issued for parts of Norfolk, Suffolk, Essex, and Kent, with up to 30cm of snow expected to fall in areas while the Environment Agency has put out 173 flood alerts and 48 warnings.

Bitterly cold 50mph winds from Ukraine and the Black Sea will tear across Britain, with temperatures plummeting to -10C – though the chill is not expected to be as ‘bitingly sharp’ as it was with the 2018 Beast from the East.

Snow will continue falling over the North East of England, while higher ground in parts of Central and Eastern Scotland experience snowfall yesterday. Rain at lower levels in Scotland has caused some flooding already.

There will be further snow across South East England tonight, while snow showers are forecast to continue in the North East – with very cold gales and snow showers expected in the East and North East on Monday.

Storm Darcy, which has been named by Dutch forecasters, couldn’t be further from the wet February of last year, which saw numerous storms from the Atlantic wreak havoc on the lives of millions of Britons. 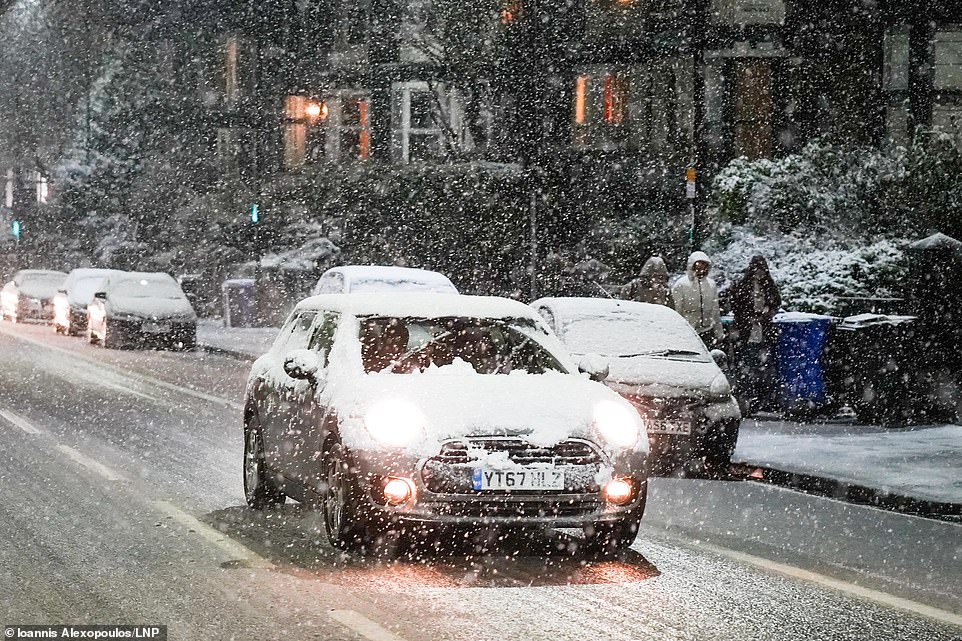 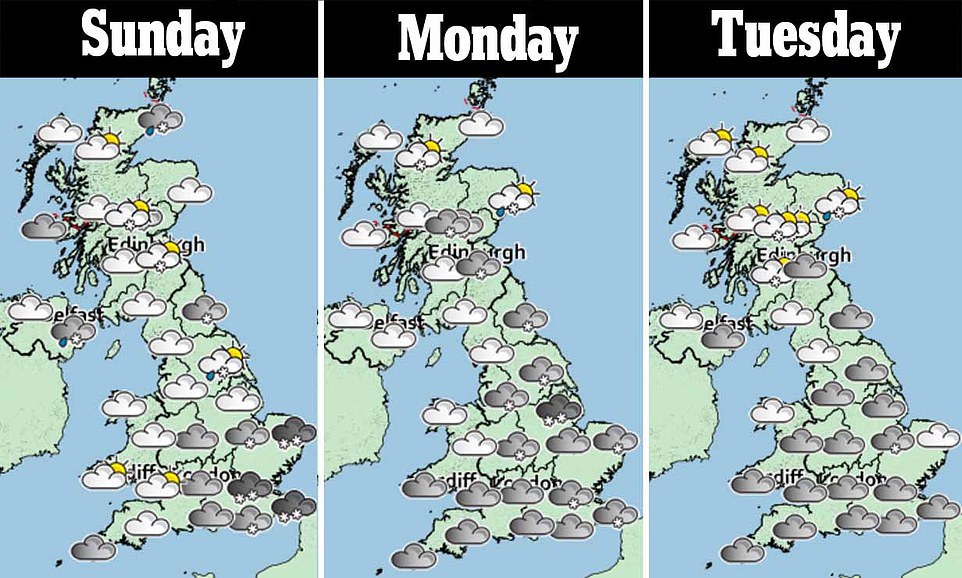 Meteorologist Sarah Kent said: ‘There will be significant disruptive snowfall across the South East. There is a small chance particularly over the Downs of Kent and the North Downs that you could see 25-30cm of snow.

‘It is a small chance but the threat is there, up to a foot of snow potentially combined with extremely strong easterly winds. Even inland in that area, gusting could be 45mph and higher than that on the coasts.

‘This could lead to significant drifting of any lying snow and obviously blizzards for the snow coming past you for anyone who is attempting to travel.’

Met Office Chief Meteorologist Paul Gundersen said: ‘The UK is in for a notably cold and snowy period over the next week, with very cold air in place over the whole of the UK by Sunday.

‘Showers will see snow accumulating across eastern areas. More widespread snow is expected and we could see 5-10 cm of snow quite widely, with a chance that a few places could see 20 cm or more.

‘With such severe weather around it’s important to keep up to date with the latest forecast.’

There will be strong easterly winds during this period which may lead to blizzard conditions and blowing and drifting of lying snow at times.

Daytime temperatures will stay in low single figures for much of the country over coming days, with some places staying below freezing and the bitter winds will make it feel even colder.

Cold Weather Alerts are in place across England, with temperatures across the UK falling as the cold air moves in, widespread overnight frosts and wind chill making daytime temperatures feel freezing. 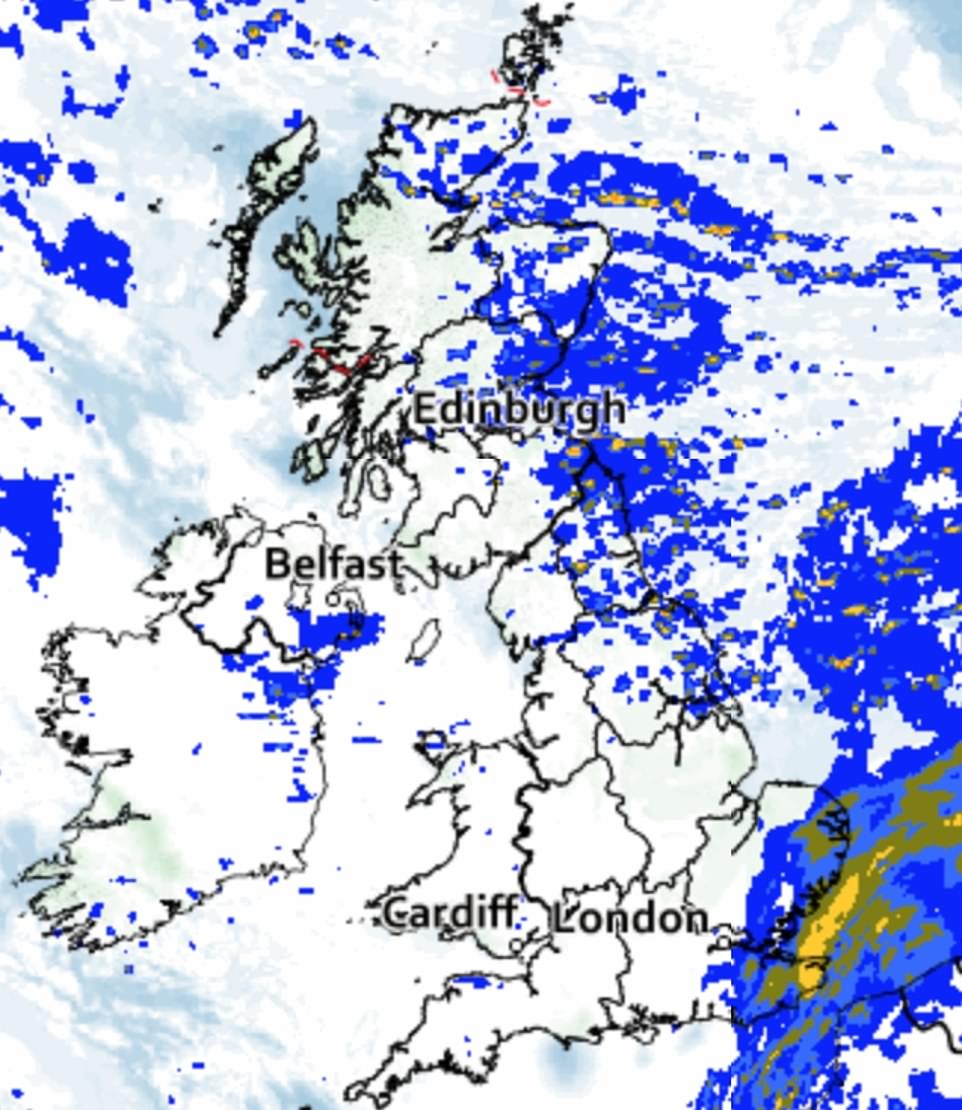 Yellow warnings for snow and ice have been issued for parts of Norfolk, Suffolk, Essex, and Kent as up to 30cm of snow is expected to fall in areas, while the Environment Agency has put out 173 flood alerts and 48 warnings 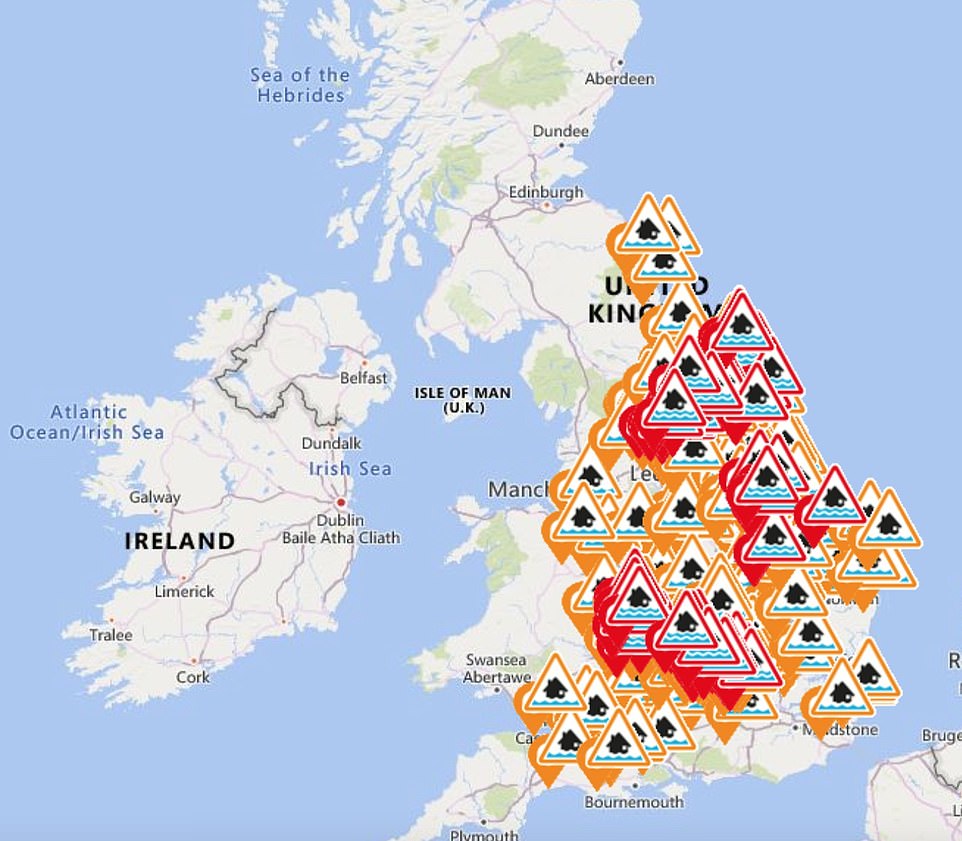 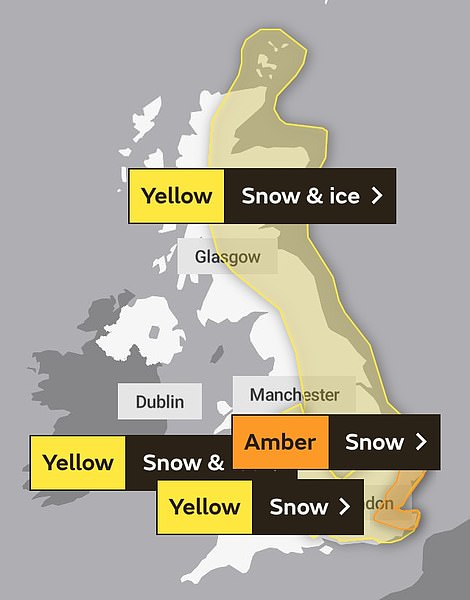 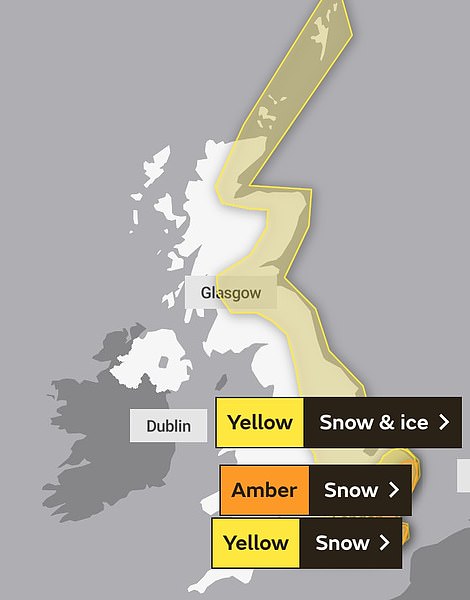 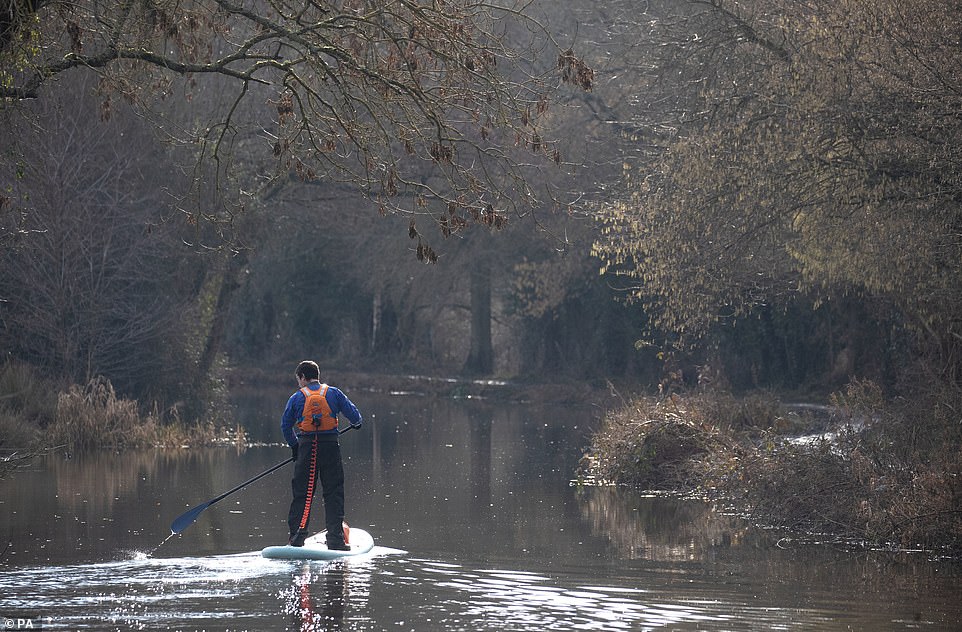 Dr Owen Landeg, Group Leader, Extreme Events and Health Protection at PHE, said: ‘Cold weather isn’t just uncomfortable it can have a serious impact on health. For older people and those with heart and lung problems it can increase the risks of heart attacks, strokes and chest infections.

‘So, it’s really crucial at this time to remember to check on frail or older neighbours or relatives, especially those living alone or who have serious illnesses.

‘Make a call, or socially-distanced doorstep visit if they live close by, to remind them of some simple but important health tips such as heating their home to at least 18C and to keep up to date with the forecast.

‘It’s also helpful to check they have enough food and drinks and any medicines they need. This will help them to stay warm and stay well.’

The cold air is likely to remain in place through next week, bringing the continued risk of snow showers, particularly in the east.

Other European countries to name impactful storms include France, Spain and Portugal in South West Europe and Sweden, Norway and Denmark in Northern Europe.