London: Britain’s barnstorming coronavirus vaccine rollout is being credited with a 60 per cent drop in symptomatic cases and 80 per cent fall in hospital admissions, clearing the way for the economy’s reopening.

Prime Minister Boris Johnson on Monday (Tuesday AEDT) vowed to “cautiously raise a pint to my lips” when beer gardens, outdoor dining, shops, gyms and hairdressers open their doors for the first time in four months on April 12.

Once the hardest-hit country in Europe, the number of infections, hospitalisations and deaths in Britain have collapsed amid the combined effects of a prolonged lockdown and speedy mass vaccination program. 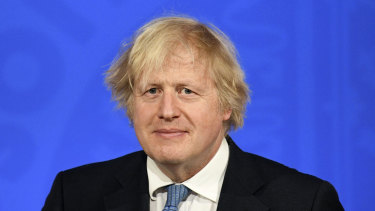 Some 31.6 million people in the United Kingdom have been given at least one dose of the Pfizer or AstraZeneca jab, representing nearly half the population. A second dose has been administered to 5.4 million people.

The vaccination rate is four times greater than in the European Union.

Deaths in Britain have fallen from a daily high of 1820 in mid-January to just 26 on Monday. 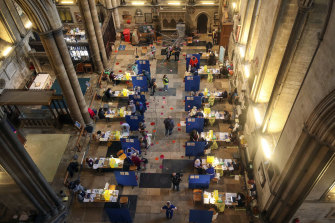 A mass vaccination centre set up inside Salisbury Cathedral in England in January.Credit:AP

“It is absolutely essential that everybody who is called for a second booster dose takes that offer up because it will increase the level of protection and almost certainly the duration of protection as well.”

Whitty said England’s four-month lockdown had helped arrest the number of hospitalisations and deaths but he also credited the effects of the vaccination effort.

Mixing indoors is still banned and indoor dining won’t recommence until mid-May at the earliest. Wales, Scotland and Northern Ireland are also easing their lockdowns in a similar staged way.

A ban on international travel was due to be lifted in May in time for the northern summer holidays, and Johnson said there was “nothing I can see in the data today that would cause us to deviate from the roadmap”.

In one note of caution, modelling conducted for the government’s powerful Scientific Advisory Group on Emergencies warned the full removal of lockdown measures in June could cause a resurgence in hospitalisations to rival the horrific peak of January 2021.

Other scenarios showed a much smaller uptick in hospitalisations.

Johnson has repeatedly said reopening the economy would lead to more cases but has pointed to the vaccination program as the tool to minimise the number of people who fall seriously ill.

The UK is closely monitoring the situation in Chile, which is battling a surge of new infections despite having one of the highest COVID-19 vaccination rates in the world.

“As we get more data, I think the information from other countries as well as our own will tell us how much we can gradually lower our guard,” Whitty said.

“But this is the reason we want to do things in a steady way, because the assumption that you just vaccinate a lot of people and the problem goes away … well I think Chile is quite a good corrective to that. This is something we’ve got to take steadily.”

Monday marked one year since the Prime Minister was admitted to St Thomas’ Hospital in central London with COVID-19.