A former bar manager at the legendary Rainbow Bar & Grill in West Hollywood has jumped to the defense of accused sex predator Ron Jeremy, saying: ‘Yes he’s a groper but he’s no rapist.’

Eliot Preschutti, 46, ran the famous rock bar on the Sunset Strip for two years from 2017-2019 and claims Jeremy came in four nights a week without fail.

He said he spent hours with the adult star and witnessed first hand how he was mobbed by dozens of female fans almost every night. 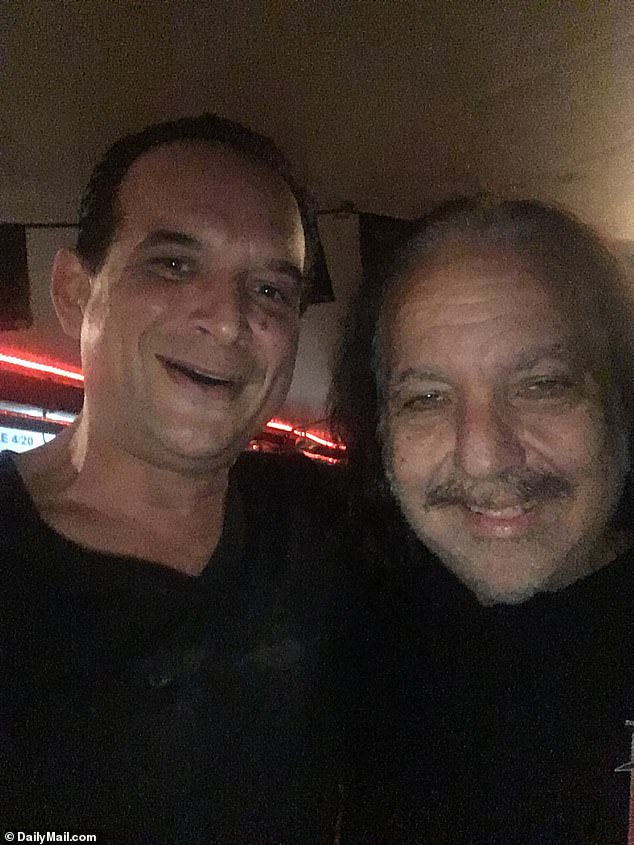 Preschutti believes Jeremy – nicknamed The Hedgehog – has been wrongly accused by women who want to make a name for themselves. 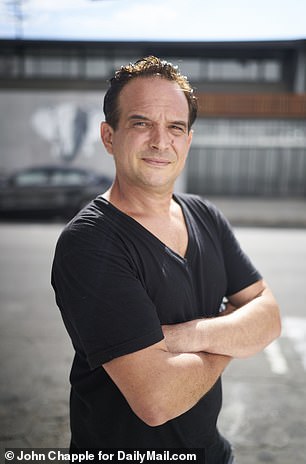 ‘I know him a lot more than most people do and while I can’t speak for any of the situations that he’s being accused of, I would just assume it’s just another transparent attempt to take him down.

‘I’m not his best friend, but I’ve had hours and hours of conversation with him and seven to eight hours, four times a week watching his behavior.

‘I’ve seen the guy in action, he just doesn’t need to do this, to rape women. There’s plenty of women making themselves available to him.

‘The same way when you get a picture with a boxer, they’re going to pretend to punch you in the jaw.’

Jeremy stands accused of forcibly raping a 25-year-old woman at a home in West Hollywood in May, 2014.

He also is charged with allegedly sexually assaulting two women, ages 33 and 46, on separate occasions at a West Hollywood bar in 2017, as well as forcibly raping a 30-year-old woman at the same bar in July 2019.

It’s not clear at which bar the alleged incidents took place, but Jeremy was a regular at the Rainbow.

Preschutti cites one incident in the bar when a woman ‘falsely’ accused Jeremy of attempted rape.

He said the woman came into the bar around a year ago and was talking to Jeremy when she followed him to the back.

Preschutti claims he witnessed the sequence of events and says the woman came running out screaming: ‘He just tried to rape me’.

He recalled: ‘I was in the kitchen the whole time and Ron came in the back and some woman, a black woman – she was heavier and not very attractive – was following him into the back area.

‘She was all over him, this and that. And I walked by and I was like “oh, there’s another girl all over Ron”.

‘And she jumps around in an absolute transparent attempt to maybe extort money or get a lawsuit or get attention, I don’t know, but it was a lie, it was pathetic. He did not try to rape that girl.’ 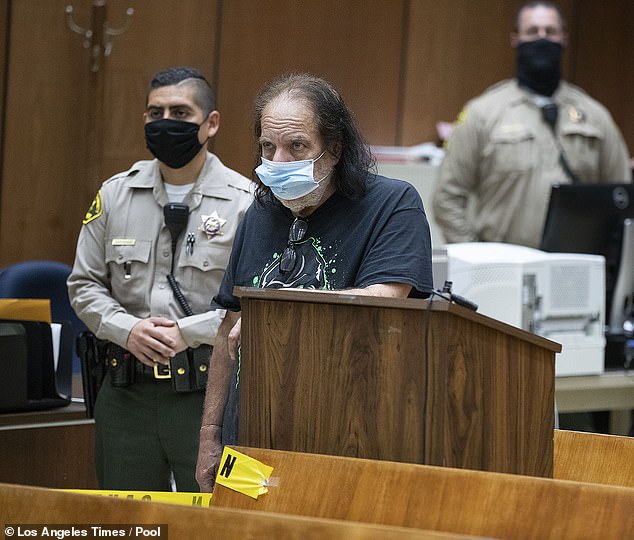 Jeremy was on Tuesday charged with raping three women and sexually assaulting another. He is pictured appearing in the Clara Shortridge Foltz Criminal Justice Center in Los Angeles 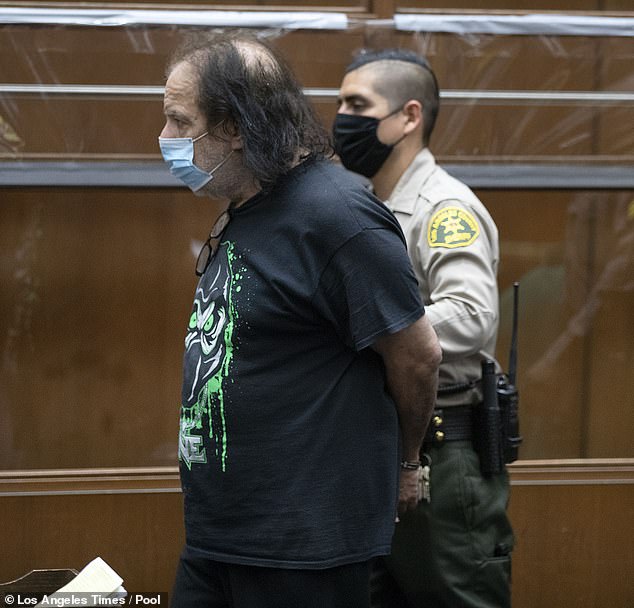 Preschutti claims the boyfriend called the police but he says the attending officers quickly realized the woman was acting crazy and it’s understood no action was taken.

DailyMail.com has been unable to verify the claim, however, and the LAPD has in the past investigated very similar allegations.

‘You know this kind of thing happens in Los Angeles a lot, especially now with social media, you’ve got these losers that are desperate, that do stuff like this,’ he said.

‘First of all, he’s almost 70-years-old and can’t even hold up his arms. My little sister can wiggle out of his grasp,’ he said.

”He’s not strong enough to rape a woman. And secondly he gets enough action that he doesn’t need to go chasing down girls.

‘He actually has the most beautiful girls in the world coming and sitting on his lap and fighting over that lap.’

He added: ‘And here’s the weird thing that a lot of people don’t understand. The guy has narcolepsy. He would sit on a stool at the bar and then would nod off for like a half an hour and then sit up. He doesn’t drink, he doesn’t do drugs, but everyone would presume he was sat at the bar wasted.’ 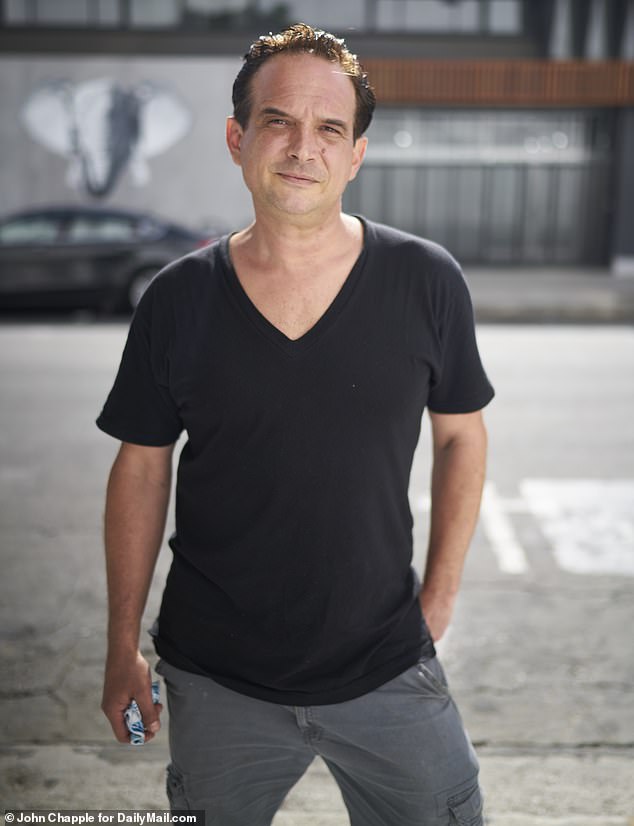 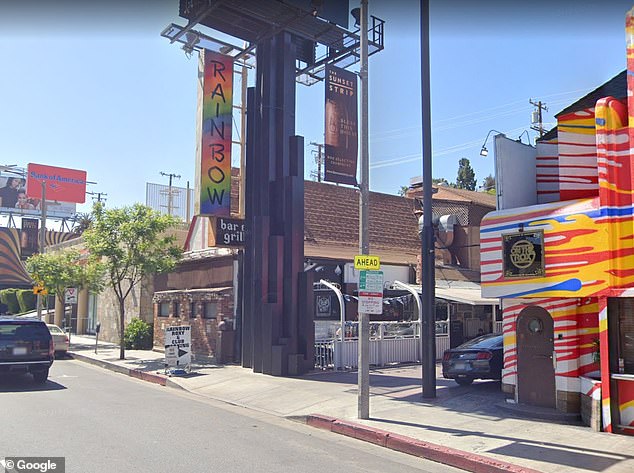 It’s not clear at which bar the alleged incidents took place, but Jeremy was a regular at the Rainbow Bar and Grill in West Hollywood

Preschutti, who left the Rainbow in September last year to pursue screenwriting work, says Jeremy would hang out on the front patio of the bar and regularly had long conversations with the bar manager.

‘We’d talk and he was just a really intelligent, sweet guy,’ Preschutti said. ‘Everybody knew him, all the bartenders knew him, he’d sit at the bar at the end of the night eating cherries.’

And the former bar manager said Jeremy never acted inappropriately with any of his female bar staff.

Preschutti said that fans, mostly tourists, would flock around him though.

‘It was mostly guys. They’d be like, “no way Ron Jeremy”, and they would run over and get pictures. He’d give thumbs up. Then their girlfriends wanted pictures.

‘The girls would be like, “Oh my God, he grabbed my butt”. And Ron goes, “well, I asked her boyfriend”. But it was all taken in fun.

‘But that’s what he does, that’s his schtick. In a way it’s expected and it has been expected for 20 years. And then all of a sudden things have changed.’

Then there would be the groups of female fans.

Preschutti said he found it hilarious how Jeremy managed to attract such beautiful women, who pored all over him.

‘The guy doesn’t even shower, he doesn’t lift his feet when he walks, he wears sweatpants, Crocs and a dirty shirt with a Mickey Mouse on it. It was impossible for me to believe that these girls were all over him, but they were,’ he said.

‘Some of the girls would request for a glimpse of his penis but he never pulled it out.

‘He would grab butts, he is a groper. I never saw him bite a breast, he would open up his mouth and put it near one for the camera, he is an actor.

‘I don’t condone that behavior, but I don’t vilify it either, that was between him and his fans.’

He added: ‘It’s not like he was running around like a predator. He was just basically touching the meteors that came his way. And it’s as simple as that from what I saw.

‘Honestly, any sane man would dismiss such allegations with contempt, especially when it’s four five years ago.

‘All they’re going to do is ruin his life and I feel sorry for him, he doesn’t deserve this.’ 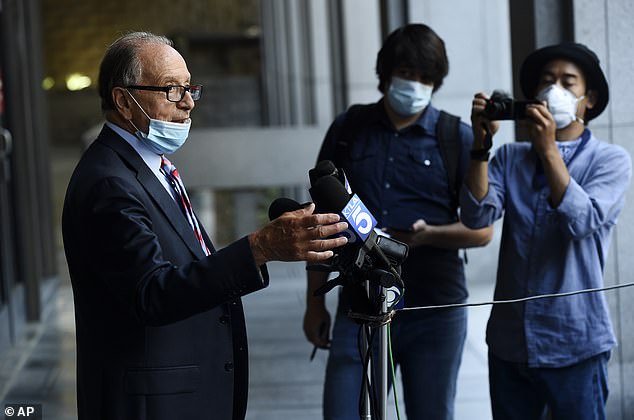 In 2018 it was reported that the Los Angeles District Attorney was reviewing a sexual battery case against Jeremy over an alleged groping incident at the Rainbow.

A woman claimed Jeremy followed her into the bar bathroom in December and groped her.

More than a dozen women accused Jeremy of sexual assault spanning three decades in a Rolling Stone article in December, 2017.

One actress claimed Jeremy raped her twice in December 1997, while others accused him of assaulting them at conventions.

Jeremy threatened to sue anyone who accused him of rape and released a statement defending himself.

‘As for the charges of Groping, I say yes, I AM A GROPER. And by groper, I mean I get paid to show up to these shows, events, and photo shoots and touch the people and they touch me. I’m not the young stud I was, but I still draw a crowd. And we are talking about things that are within reason, in front of police officer’s and security that are always there as well as the tons of cameras and the general public,’ he said in the statement.

‘But seriously, if you were going to be around Ron Jeremy, wouldn’t you assume that I’d be a little bit touchy feely? Yes. This is what I do for a living. I am not Kevin Spacey, Louis CK, Weinstein or Cosby.’