Buenos Aires: As Argentina was scrambling to introduce emergency measures to insulate its ailing economy from the coronavirus last week, the Chinese ambassador paid a visit to the home of President Alberto Fernandez to discuss an offer.

At the meeting in the wealthy Olivos suburb of Buenos Aires, ambassador Zou Xiaoli laid out how the Asian giant was ready to help Argentina face the pandemic: donating masks, gloves, thermometers and protective suits. 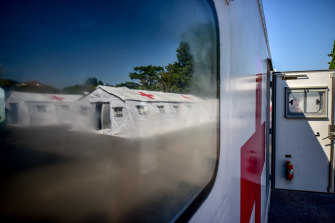 A temporary field hospital built by the Argentine Army at Campo de Mayo Military base in Buenos Aires with the assistance of Chinese donations.Credit:Getty Images

The donations, welcomed by Fernandez's government, show how China is leveraging its production of medical equipment and expertise in halting the coronavirus as a soft-power tool in regions such as South America, where it is jostling for influence against the United States.

From Argentina to Mexico, Brazil to Peru, Latin American nations have accepted offers of support from China as the number of coronavirus cases across the region has climbed, amid growing fears about the preparedness of their healthcare systems.

There have been nearly 500,000 confirmed cases worldwide of the virus, which causes the respiratory disease COVID-19, and over 20,000 deaths.

Although South America has so far not been as hard hit as other parts of the world, experts fear that may change as winter arrives in the southern hemisphere.

Looking for some good news?

We could all do with some good news right about now. That’s why we have launched The Good News Group, a Facebook group where we’ll share uplifting, inspiring and positive stories and invite members to do the same. Join the group here.

"Some countries in the region have reached out to China asking for help," a Chinese official in Buenos Aires, who asked not to be named, told Reuters. "We will share with them our experience in combating COVID-19 and offer sanitary materials within our capacity."

As trade tensions between Washington and Beijing have simmered in recent years, the administration of US President Donald Trump has warned Latin American nations they should be wary of becoming too economically reliant on China – to little avail.

In Argentina, the region's third-largest economy, China has made steady in-roads, from solar power investments to the construction of a new space monitoring station. It has supplied over $US17 billion of financing since 2007, Inter-American Dialogue data shows. China has also become the top consumer of Argentine soybeans and beef.