One of the world’s largest planes, the Antonov cargo plane, skidded off the runway suffering serious damage during a botched emergency landing in Russia today.

The An-124 Ruslan aircraft, which is able to carry 150 tons, took off from Novosibirsk airport in Siberia but immediately got into trouble, losing radio contact with the ground.

The hulking Soviet-designed plane with 14 crew circled before crash landing, skidding off the runway, causing damage to its front wheel and the left wing. 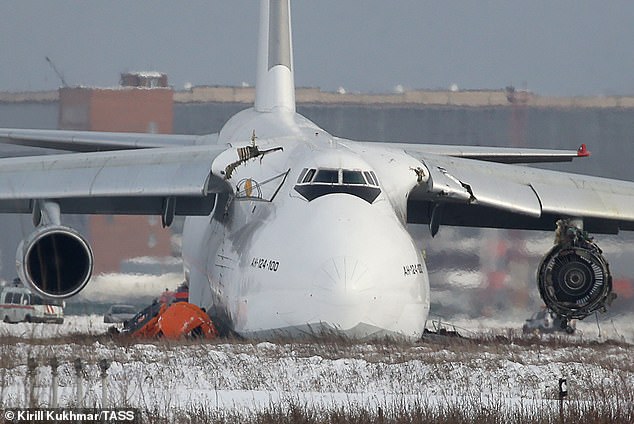 The Antonov An-124 Russian heavy transport aircraft (pictured), owned by Volga-Dnepr Airlines, skidded off the runway and travelled more than 900ft 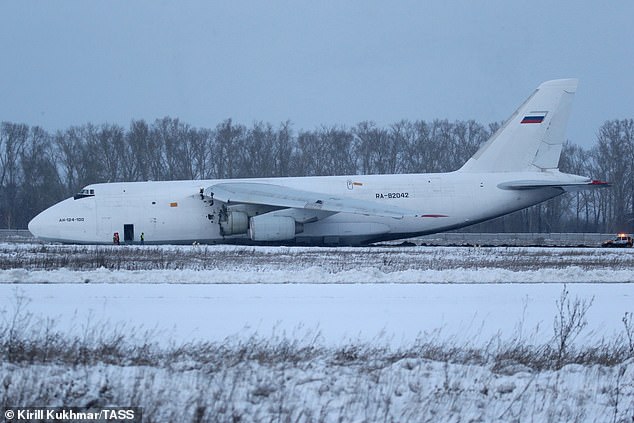 Smoke was pouring from one of its jet engines as it landed, according to witnesses.

A large part of an engine crashed through the roof of a warehouse near the airport, narrowing missing nearby people and miraculously, no casualties were reported on the aircraft or on the ground.

The plane came to rest some more than 900ft off the runway at the city’s Tolmachevo airport.

Speaking about the terrifying moment, the aircraft’s captain Evgeny Solovyov said: ‘Our second engine blew up, the power cut, and we returned to the airport.’ 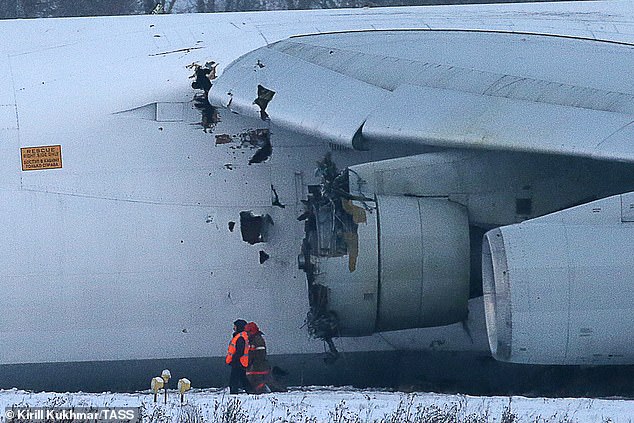 The plane’s captain said they had only got up to around 900ft and tried to contral air traffic control to let them know only to realise they have no on-board electricity. Pictured: The damage to the fuselage

He said the plane had only managed to gain 985ft and with no on-board electricity, he couldn’t talk to air traffic control.

After landing the reverse thrust did not work ‘which is why we rolled off the runway’.

The loss of power came when he retracted the landing gear after takeoff, said Solovyov: ‘And then there was a kind of clap. The plane was completely de-energised.’

One account said its left wing appeared ‘bent’ and other witnesses said the plane appeared to have trouble picking up speed as it took off.

It then turned and came into land within several minutes, say reports. 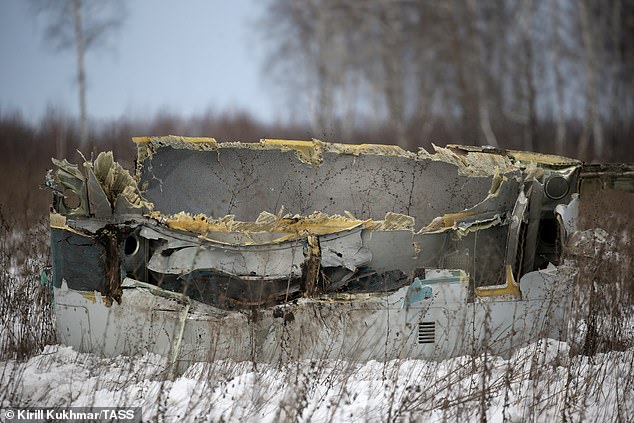 Witnesses reported smoke pouring out of the jet engines and others noted the plane appeared to struggle picking up speed during take off. Pictured: A fragment of the plane left behind

‘After the engines of the plane started to smoke, there was a pop, then a fragment of the engine blades fell into the warehouse,’ an onlooker told NGS news website.

‘There were no casualties. The roof of the warehouse, racks and internal communications were damaged.’

Videos highlighted the stricken Antonov, the world’s heaviest military plane currently in use, on its approach and emergency landing and pictures show it marooned at the airport.

It is unclear what cargo was on board the plane belonging to Russian carrier Volga-Dnepr Airlines, but the flight was bound for Austria. 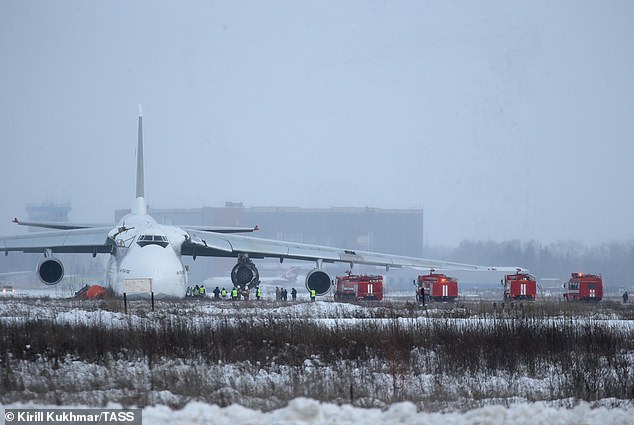 The captain suggested the plane had become ‘completely de-energised’ and after landing the reverse thrust did not work, resulting in the plane rolling off the runway. Pictured: The grounded plane hundreds of feet from the runway

The Transport Investigative Committee said the plane was bound for Vienna, the Austrian capital.

Two minutes after take off ‘the aircraft made an emergency landing at Tolmachevo airport, and while landing, the plane rolled out of the runway.

A preliminary case into safety breaches has been opened under Russia’s criminal code.

The airport was temporarily closed and six flights were diverted to Barnaul and Kemerovo.