Two six-year-old boys from east London who are raising money for charity by selling lemonade have received an unexpected donation – from Hollywood actress Angelina Jolie.

Ayaan Moosa and Mikaeel Ishaaq, now known now as the Lemonaid Boys, from east London, created the lemonade stand in a bid to sell ‘lemon for Yemen’ after learning about the ongoing conflict and famine.

The ongoing conflict in Yemen saw 23,000 people killed in 2019, with thousands more dead from preventable causes, including malnutrition, disease and poor health.

About 80 per cent of the population – 24million people – are in need of humanitarian assistance and protection.

The pair’s small act of charity exploded in their hometown of Redbridge, with people coming from all over the UK to donate to the cause. 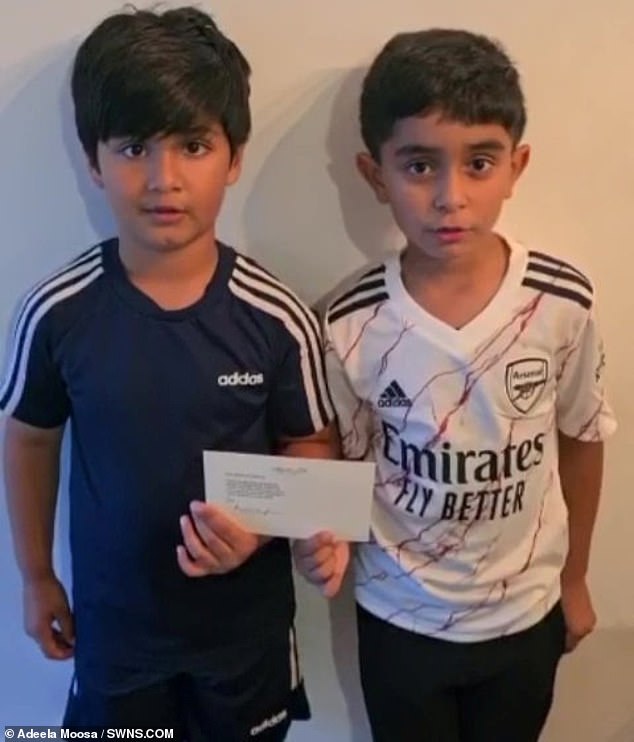 An undated video grab shows Ayaan Moosa (left) and Mikaeel Ishaaq (right) from Redbridge in East London, thanking Angelina Jolie for her donation and holding a letter from the actress herself 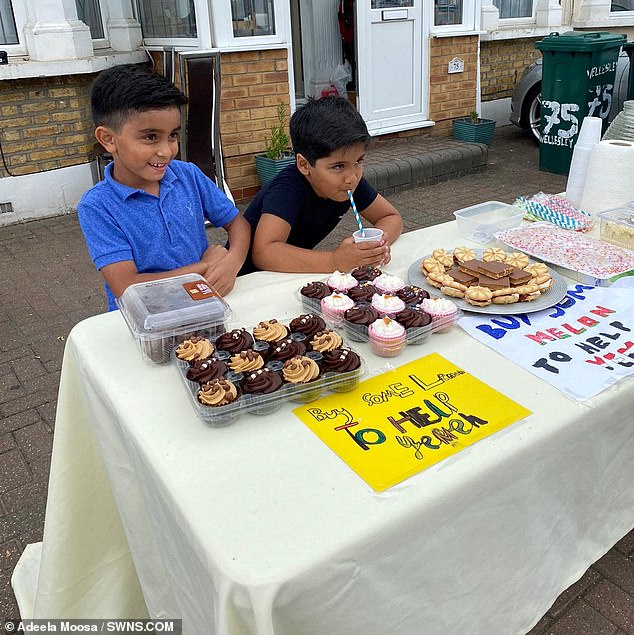 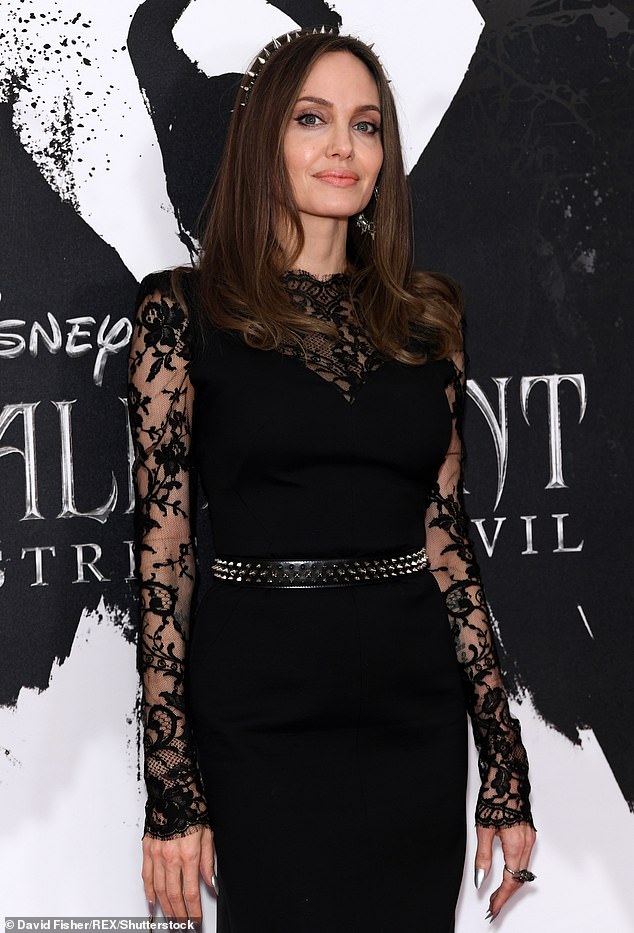 Angelina Jolie is pictured during a film photocall for Maleficent: Mistress of Evil last year. Angelina Jolie has made a ‘very generous donation’ to two young boys from Redbridge, East London, who are raising money for Yemen by selling lemonade

Ayaan’s father, Shakil Moosa, said: ‘I remember one man bought a glass of lemonade and a cake and gave £300. That was a lot.

‘When the media covered the stand a couple months ago, Angelina Jolie reached out to her representatives in the UK as she wanted to make a contribution and utilise her platform to bring attention to Yemen.’

The dad said he could not disclose the amount the Oscar-winning star of Girl Interrupted, Tomb Raider and Maleficent gave, but said it was ‘very generous’.

The letter sent by the actress, who has also performed a role as a UNHCR Special Envoy, said: ‘Thank you for what you and your friends are doing to help children in Yemen.

‘I’m sorry I’m not able to buy a lemonade from you, but I’d still like to make a donation to your stand.’ 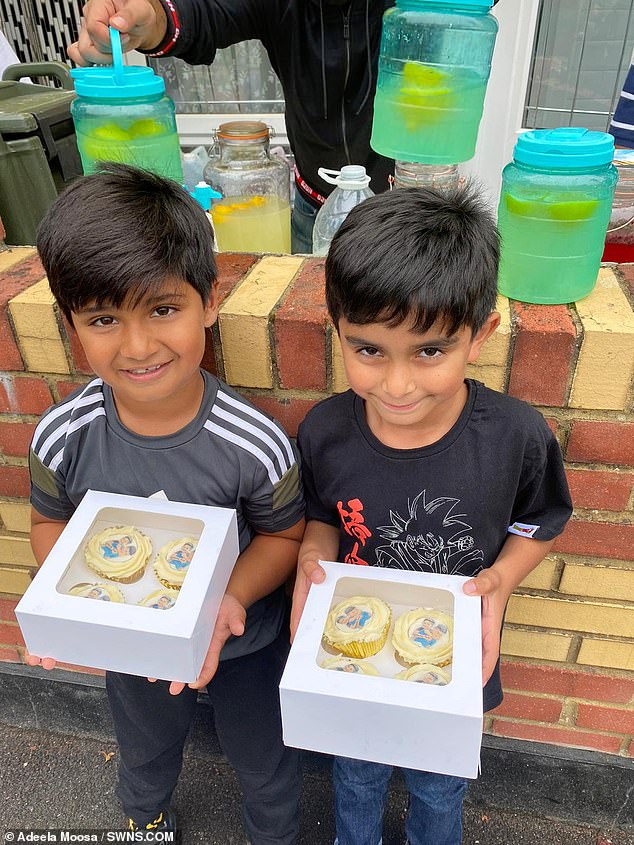 Shakil said: ‘We are hoping to Facetime in the next couple of weeks just so the boys can thank her. I know that next time she’s in London, she’s planning on popping down for a lemonade.’

Shakil said the pair’s drive to raise money came after he and his wife Adeela showed their son a charity video about Yemen.

The 37-year-old online travel business owner said: ‘My wife and I were sat at home and we’d seen some adverts and we’d been reading about the crisis in Yemen online.

‘I thought it would be nice to do something but also teach our son the value of charity.

‘We showed him an appeal charity video of Yemen and showed him the video and also wanted to get an impression of what he thought.

‘So many people shelter their kids but it’s the next generation that needs to make a change.

‘He was stunned. It was the first time he realised that not everyone has food, water and a cushy home in east London. 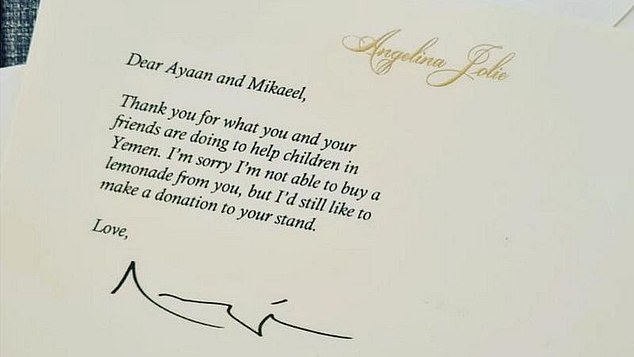 Ayaan, Mikaeel and their community have raised thousands for the Yemen crisisAyaan Moosa and Mikaeel Ishaaq set up ‘Lemonade for Yemen-Aid’

‘He and his best friend love lemonade so they set up a little lemonade stand and hopefully raise a couple of hundred pounds and put it towards charity.’

It is the reaction from young Yemeni children as they receive gifts and parcels paid for with the massive £70,000 they have already raised that has made the boys happiest.

The dad said: ‘The charity has gone out and taken pictures of families receiving water and parcels for us.

‘You should have seen the boys’ faces when we showed them that, they couldn’t believe that the money they had raised had done something like that.

‘Before he goes to sleep, Ayaan has been asking me to show him the picture of the kids receiving the parcels.

‘We’ve been talking to Unicef who also want to raise awareness about this, and they’ve sent messages from kids in Yemen who wanted to say thank you to our kids.

‘They’re going to be doing some pen pal writing.

‘I’m so proud. It’s brilliant our kids have got heart and compassion. It fills me with pride.

‘They’re trying to make a difference. The beautiful but sad part of this is that they think they’re solving the problems, but of course it’s a drop in the ocean.

‘But I think they’re doing a huge, great, wonderful thing by raising the awareness of what is going on out there.

‘What more could you ask for?’

You can donate to the boys’ fundraiser on https://www.justgiving.com/fundraising/lemonaid-boys

Related posts:
KITH Enlivens Calvin Klein's Signature Underwear With Help From Gigi Hadid
Three Air National Guard members killed in shock crash as ‘plane was trying to return to nearby airport’
Popular News
Yahya Abdul-Mateen II Wins First Emmy for Outstanding Supporting Actor in a Limited Series or Movie
21/09/2020
Man Utd wonderkid Ramon Calliste, called ‘the next Giggs’, now owns luxury watch business and makes £5m a year – The Sun
26/03/2020
Megan Thee Stallion Addresses Criticism Over Twerking: ‘I Love to Shake My A**’
26/03/2020
Police guard shops to stop coronavirus panic-buyers and enforce social distancing – The Sun
26/03/2020
Coronavirus: Good Morning Britain’s Dr Hilary reveals ‘game-changing’ self-testing kit
26/03/2020
Recent Posts
This website uses cookies to improve your user experience and to provide you with advertisements that are relevant to your interests. By continuing to browse the site you are agreeing to our use of cookies.Ok