WFH drives decline in offices: Report reveals 18million square feet of space once used for business has been decommissioned since start of the pandemic

The amount of office space in England dropped by 18million square feet during the pandemic, according to official data – with expects saying it will continue to plunge.

The 2 per cent fall in the 12 months to March 2021 was a reduction equivalent to around 35 times the floor space in the Gherkin building in the City of London.

Commercial property analysts said the fall would be a ‘trend going forward’ as people continue to work from home or go into the office a few days each week, with up to one in ten offices expected to be no longer needed within just five years’ time.

The Valuation Office Agency data, which was analysed by law firm Boodle Hatfield, also showed the fall was bigger in smaller cities and not in central business districts.

The worst-hit area was the city of Derby – and experts added that much of the UK’s decommissioned office space is expected to be converted to residential property.

Average office occupancy levels in England fell to just 10 per cent in the week before Christmas after new restrictions came in, having previously got above 20 per cent. 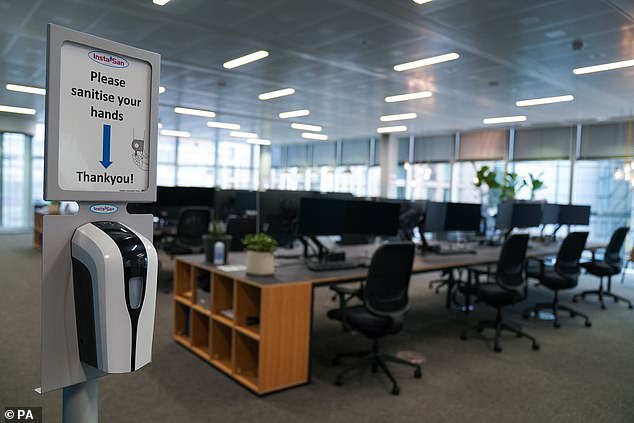 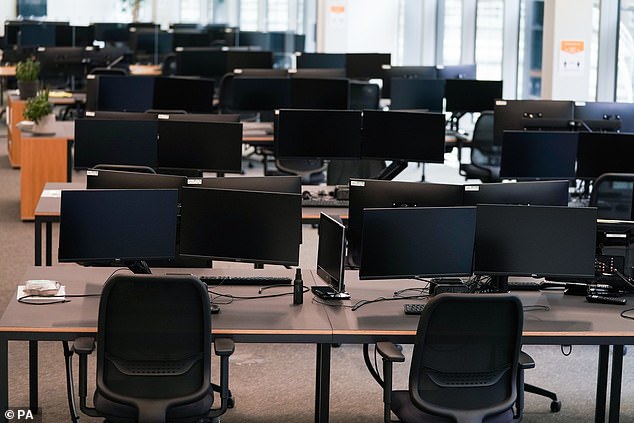 The data revealed a huge plunge in national office usage in the year following the country being put into its first national lockdown, reported the Financial Times.

This was partially because construction work was also halted in many areas when restrictions first began in March 2020, with developers having ‘remained wary since’.

The analysis found office space in Greater London fell by 3 per cent over the period, while the plunge was more than twice that in outer London.

The areas with the highest proportion of office space lost were Derby (20 per cent), Brent in North London (19 per cent), Brentwood in Essex and Southampton (both 18 per cent) and Ealing (14 per cent) in West London.

The analysis looked at office space that has been permanently taken out of use, rather than space that is currently vacant without a tenant.

David Rawlence, an associate at Boodle Hatfield, said: ‘Coronavirus has shaken up the commercial property landscape, resulting in substantial quantities of office space being put out of use. This has been particularly evident in smaller cities and outer London suburbs.’

He added: ‘Businesses are increasingly looking for high-spec office space with all the mod cons in order to tempt workers back into the office.

‘Spaces that facilitate collaboration between colleagues, with amenities that promote mental wellbeing such as gyms and relaxation rooms. Such spaces will be the most attractive to prospective commercial tenants.’

The firm added that offices in prime locations with good connections to public transport links and local amenities will continue to appeal to businesses. 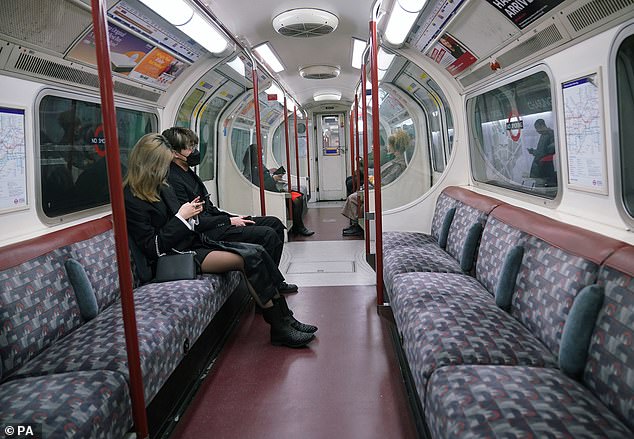 Commuters on a Bakerloo line Underground train carriage at 5.25pm during the evening rush hour on December 13 last year, the day new working from home guidance came into force 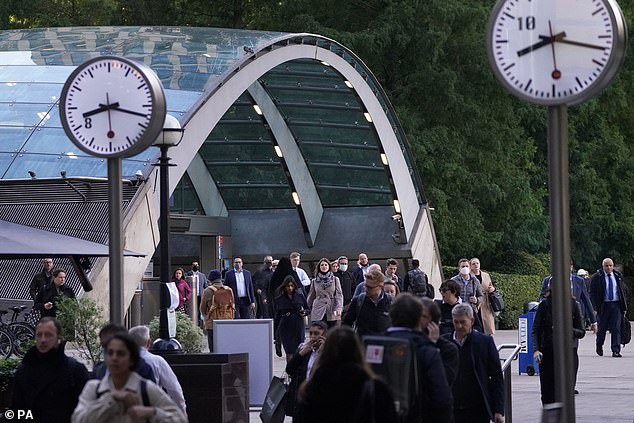 However, its experts added that commercial landlords may need to be prepared to offer more flexible lease terms, better quality office space and amenities.

What is the official Government advice on working from home?

The following is taken from Gov.UK:

Office workers who can work from home should do so from Monday 13 December. Anyone who cannot work from home should continue to go into work – for example, to access equipment necessary for their role or where their role must be completed in person. In-person working will be necessary in some cases to continue the effective and accessible delivery of some public services and private industries. If you need to continue to go into work, consider taking lateral flow tests regularly to manage your own risk and the risk to others.

Employers should consider whether home working is appropriate for workers facing mental or physical health difficulties, or those with a particularly challenging home working environment.

Analysts said the amount of office space has probably fallen further since March 2021 because of a shift towards a more long-term model of working from home.

Commercial property expert Mat Oakley told the FT: ‘Our view is we don’t need as much office space in the UK or anywhere else if high levels of agile working remain.’

The Savills head of European commercial property research said it was ‘reasonable to say’ the fall in space is ‘a trend going forward and a trend that needs to happen’.

Just today, Prime Minister Boris Johnson reiterated the Government’s advice in place since last month that people should work from home where possible.

Similar advice has been a common feature of the lockdowns, and was most recently brought in as part of Plan B measures to help combat the Omicron variant.

Speaking to broadcasters during a visit to a vaccination hub at Stoke Mandeville Stadium in Aylesbury, Buckinghamshire, he said: ‘I think the way forward for the country as a whole is to continue with the path that we’re on. We’ll will keep everything under review.

‘The mixture of things that we’re doing at the moment is, I think, the right one.

‘So, number one, continue with Plan B, make sure that people take it seriously, do what we can to stop the spread, use the Plan B measures, work from home if you can, wear a mask on public transport… take a test before going out to meet people you don’t normally meet, think about the the requirements under Plan B, but also get the boost.’