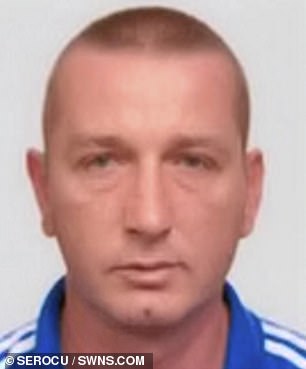 Vladimir Bardoshi, pictured, is the third member of a human trafficking gang to be jailed for smuggling migrants across the English Channel

The leader of a people smuggling gang bringing illegal migrants into the UK on a dinghy has been jailed.

Vladimir Bardoshi was the third member of the group of traffickers to be convicted after he was handed a nine-year prison sentence this week.

The 36-year-old from Albania was part of a network that transported illegal migrants from France in small inflatable boats, police said.

They made the treacherous journey by travelling across the English Channel at night and landing on beaches near to Deal in Kent.

A European Arrest Warrant was issued for Bardoshi, who co-ordinated the operation, initially in the UK before moving to Europe.

Bardoshi was tacked down in Spain in January and extradited back to the UK.

Last month he pleaded guilty to conspiracy to do an act to facilitate the commission of a breach of UK immigration law by a non-EU person.

His arrest warrant was issued following the conviction of two his associates, Feim Vata, 38, and Xhemal Baco, 26, in 2018, that saw each jailed for eight years. 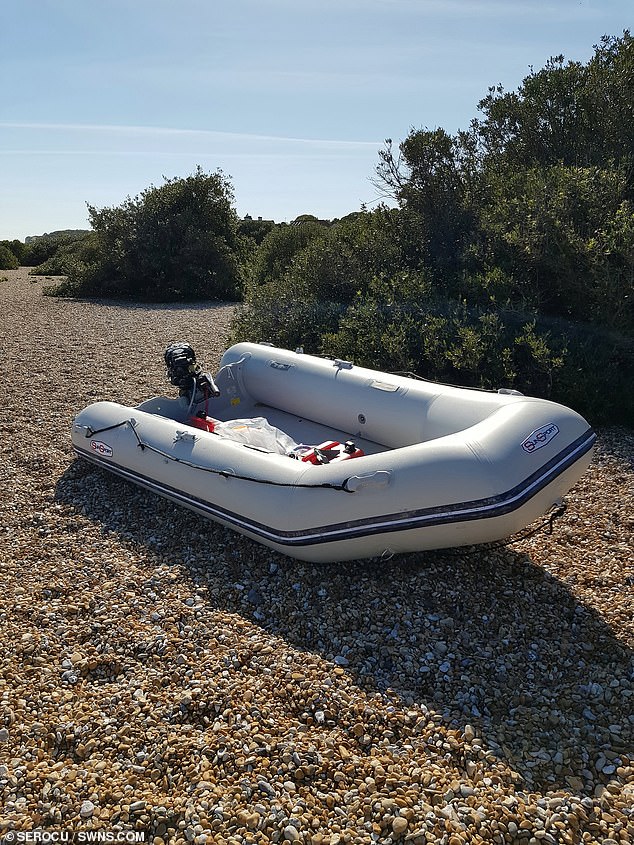 It is thought that Baco and Vata completed the trip across the Channel at least three times and, whenever they needed to abandon the boat, would simply buy a new one with cash using false names.

One night in October 2018, Baco picked up six Albanian illegal migrants in France, with Baco driving the small inflatable boat across the English Channel.

When they arrived at the shore near Deal, Baco hid the boat in some bushes and he and the migrants got in a vehicle driven by Vata, before they were arrested by officers.

At Canterbury Crown Court on Tuesday, Bardoshi was jailed for nine years.

Detective Inspector Clair Trueman, from SEROCU’s investigation team, said: ‘This conviction represents a huge amount of work by authorities both here in the UK and across Europe. I’d like to pay tribute to the tenacity of everyone involved in this investigation, as their efforts have ensured that the leader of this dangerous group has been jailed.

‘When the men and the illegal migrants were arrested, we found them cold and wet, they had travelled in an overloaded inflatable boat with no life vests or navigation equipment and across a busy shipping lane in total darkness. It is remarkable that no one died during the extremely risky process.

‘I hope that this sentence serves as a stark warning to those looking to put lives in danger by bringing people into the UK illegally. We are committed to apprehending those involved and will do everything in our power to ensure they are stopped.’

Related posts:
Iran's supreme leader says Israel is a 'cancerous tumor'
Nick Cordero's Wife Says He's Taking a Step Forward After Setback
Popular News
First look at Casualty's horror ambulance crash that leaves Faith and Dylan fighting for their lives
22/01/2021
Man Utd wonderkid Ramon Calliste, called ‘the next Giggs’, now owns luxury watch business and makes £5m a year – The Sun
26/03/2020
Megan Thee Stallion Addresses Criticism Over Twerking: ‘I Love to Shake My A**’
26/03/2020
Police guard shops to stop coronavirus panic-buyers and enforce social distancing – The Sun
26/03/2020
Coronavirus: Good Morning Britain’s Dr Hilary reveals ‘game-changing’ self-testing kit
26/03/2020
Recent Posts
This website uses cookies to improve your user experience and to provide you with advertisements that are relevant to your interests. By continuing to browse the site you are agreeing to our use of cookies.Ok