Home » World News » A mystery woman dressed in silk and gold found buried under the London streets was from the elite of the Roman Empire, researchers say

A mystery woman dressed in silk and gold found buried under the London streets was from the elite of the Roman Empire, researchers say 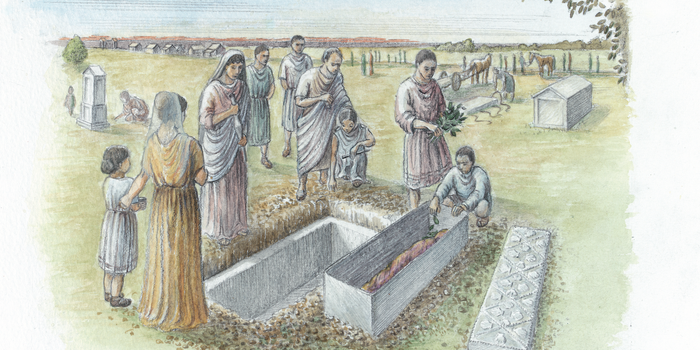 A team of researchers has come closer to uncovering the mystery behind a noble Roman woman who lived in the 4th century AD and was buried in a stone sarcophagus under a market in London, England.

The woman was first discovered among rows of graves in March 1999 under London's Spitalfields market, which was being excavated at the time.

Her coffin, decorated with scallop shells, indicated at the time that she was someone of great wealth and high status. The extent of her riches has only now been revealed by the team of researchers from the Museum of London Archaeology.

In a new book published this week, the team revealed that after analyzing the woman's teeth, they found that she most likely "grew up and spent the bulk of her life in mainland Europe – most likely Rome itself – before marrying as a teenager and moving to England," the Daily Mail reported.

It is still unclear who her husband was, although she is thought to have been the wife of one of the Roman senators, who ruled between 350AD and 410AD.

Researchers say the woman was wrapped in the highest-quality silk from China, interwoven with fine gold thread made of 97 percent pure gold.

Further microscopic analysis of the woman's clothing found that a dark brown wool band she wore was actually originally purple — a hallmark of the rich and powerful in Roman Britain.

The new findings come as part of an ongoing 30-year project run by the Museum of London Archaeology.

The woman was originally found among the graves of almost 500 individuals, most of whom were men.

The researchers believe that this could be because many men migrated to London for labor in the Roman period, whereas newborn girls were either buried somewhere or murdered deliberately.

The latest book also explains that a whole segment of the cemetery dug up under the market was dedicated to young children, which is considered highly unusual for the time.

'This is often explained in terms of the social status of children in the Roman colonies and classical beliefs that infants did not have souls being reflected in more casual burial practices," a spokesperson for MoLA said in a press release provided to Insider.

"This new evidence raises the question as to whether infants were instead being buried in as yet undiscovered separate cemeteries," the spokesperson added.

Related posts:
Horse racing tips: Richard Kingscote's ride at Lingfield can start the week with a bang plus other best bets for Monday
Why does Keith Lemon wear a bandage on his hand?
Popular News
Jason Derulo Explains Why He Prefers TikTok to Instagram and Twitter
17/01/2021
Man Utd wonderkid Ramon Calliste, called ‘the next Giggs’, now owns luxury watch business and makes £5m a year – The Sun
26/03/2020
Megan Thee Stallion Addresses Criticism Over Twerking: ‘I Love to Shake My A**’
26/03/2020
Police guard shops to stop coronavirus panic-buyers and enforce social distancing – The Sun
26/03/2020
Coronavirus: Good Morning Britain’s Dr Hilary reveals ‘game-changing’ self-testing kit
26/03/2020
Recent Posts
This website uses cookies to improve your user experience and to provide you with advertisements that are relevant to your interests. By continuing to browse the site you are agreeing to our use of cookies.Ok