Home » World News » A Georgia sheriff’s deputy was fired after he was filmed repeatedly punching a Black man during a traffic stop, authorities say

A Georgia sheriff’s deputy was fired after he was filmed repeatedly punching a Black man during a traffic stop, authorities say 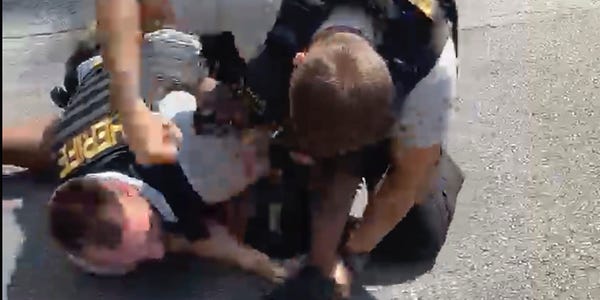 A sheriff's office in Georgia fired a deputy over the weekend after video footage showed him violently punching a Black man during a traffic stop.

The Clayton County Sheriff's Office has not publicly named the officer involved in the incident, but said a criminal investigation is underway and will be turned over to the Clayton County District Attorney's Office.

"After being made aware of a video posted on social media involving a Deputy using physical force on a man, Sheriff Victor Hill ordered his entire Internal Affairs Unit to come in and begin an investigation that has been on going since 8 pm (Friday)," the sheriff's office said in a statement.

The Black man seen in videos of the incident has been identified by the sheriff's office as 26-year-old Roderick Walker.

The incident between Walker and sheriff's deputies started as a traffic stop, Walker's lawyer, Shean Williams, told the Washington Post.

Williams said during a press conference broadcast on CBS46-TV outside Clayton County Jail that Walker, his girlfriend, their 5-month-old child, and his stepson had paid a driver for a ride after dropping off a rental car. Police pulled the driver over, and asked the driver and Walker for identification, Williams said.

Williams said Walker didn't have his ID on him, and the deputies ask him to step out the the car.

Videos of the incident show Walker being pinned to the ground by two deputies. One of the deputies can be seen striking Walker in the face. Williams said Walker lost consciousness twice during the incident.

"How does a taillight being broke end up with a man being beaten, in the way he was beaten, in a chokehold, almost dying?" Williams asked in the press conference.

Walker was also arrested on suspicion of battery and obstructing officers.

He remains in custody. The sheriff's office said he cannot be released on bond because he "has a felony probation warrant out of Fulton County for Cruelty to Children, Possession of a Firearm by a Convicted Felon, and a Failure to Appear warrant out of Hapeville."

The sheriff's office said Walker received x-rays which showed he had no fractured bones following the incident. He's being monitored at the jail's hospital.

Related posts:
Liverpool to sign 17-year-old Fluminense keeper Marcelo Pitaluga in £2m transfer this week after impressing Klopp
Nev Schulman thinks ‘DWTS’ will make people smile amid the pandemic
Popular News
White Bar Owner Indicted In Fatal Shooting Of Nebraska Protester Dead By Suicide
21/09/2020
Man Utd wonderkid Ramon Calliste, called ‘the next Giggs’, now owns luxury watch business and makes £5m a year – The Sun
26/03/2020
Megan Thee Stallion Addresses Criticism Over Twerking: ‘I Love to Shake My A**’
26/03/2020
Police guard shops to stop coronavirus panic-buyers and enforce social distancing – The Sun
26/03/2020
Coronavirus: Good Morning Britain’s Dr Hilary reveals ‘game-changing’ self-testing kit
26/03/2020
Recent Posts
This website uses cookies to improve your user experience and to provide you with advertisements that are relevant to your interests. By continuing to browse the site you are agreeing to our use of cookies.Ok