Jerusalem: Much like the epic hero himself, the ancient tablet recounting the adventures of Gilgamesh has seen its share of wilderness journeys.

The tablet, which bears fragments of one of the world’s oldest works of literature, has passed through dealers in Israel, the United Arab Emirates, Britain and most recently the US. 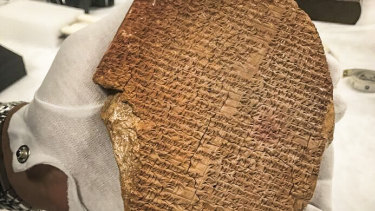 A portion of the Epic of Gilgamesh that was looted from Iraq and sold for $1.6 million to Hobby Lobby for display in the Museum of the Bible. Credit:AP

But the 3500-year-old artefact may be returning to its homeland in Iraq, after a US federal court ruled that it must be surrendered.

US officials say the tablet, which bears text from the Sumerian poem the Epic of Gilgamesh, was illegally brought to the US before it was purchased by arts and crafts firm Hobby Lobby.

It was to be displayed at Hobby Lobby’s Museum of the Bible, which has faced controversies over the legality of its collection. (The text to the Epic of Gilgamesh doesn’t appear in the Bible.)

But US authorities have now formally ordered the forfeiture of the tablet, raising hopes that it will at last be returned to Iraq, where it was uncovered in 1853.

Jacquelyn M Kasulis, New York east attorney, said: “This ruling is a milestone on the path to returning this rare and ancient masterpiece of world literature to its country of origin. This office is committed to combating the black market sale of cultural property and smuggling of looted artifacts.”

The five-by-six inch (12 by 15 centimetre) tablet is believed to have been looted from Iraq in the early 1990s and was purchased by an American antiques dealer in London in 2003.

From there, it was shipped to the US undeclared and sold with false documents. Hobby Lobby bought it for $US1.67 million ($2.27 million).

US officials said Hobby Lobby has consented to the forfeiture while Steve Green, its president, has said he was naive about the tablet’s origins and “knew little of the world of collecting” when he began work as an antiquarian.