Yelp Will Put Alerts on Businesses Accused of Racism 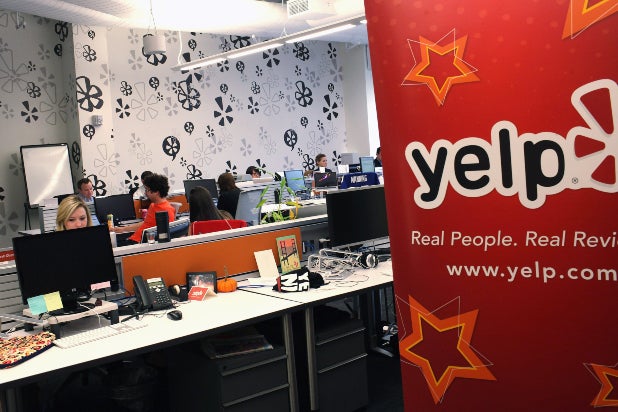 Yelp will now place an alert on company pages when that business has been accused of racism, as part of a new plan to combat the discrimination on the app.

Customers who use the business review website or app to look up a business will be shown a warning that says “Business accused of racist behavior.”

Yelp vice president of user operations Noorie Malik wrote in an Oct. 8 blog post that the company’s decision was motivated by a spike in reports of racist behavior from business owners following a wave of anti-racist activism spearheaded by the Black Lives Matter movement.

Earlier this year, Yelp introduced a public attention alert feature that warned users if a business’ page was receiving an unusual influx of traffic or negative reviews (an online technique known as review bombing, where users deliberately draw the company’s rating down) due to any kind of controversy.

The new system will pair the warning with a verified news article describing the incident(s), Yelp said.

“As the nation reckons with issues of systemic racism, we’ve seen in the last few months that there is a clear need to warn consumers about businesses associated with egregious, racially-charged actions to help people make more informed spending decisions,” Malik said. 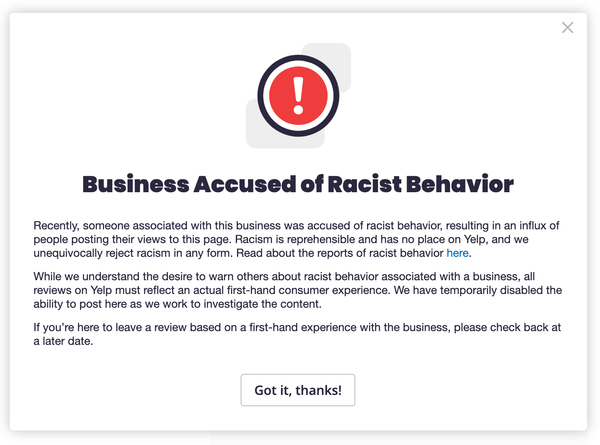 Malik said that Yelp is experiencing a sharp uptick in “media-fueled incidences” on the platform, an increase of 133% “compared to the same time last year.”

Between May 26 and Sept. 30, the company issued over 450 alerts on business pages — mainly establishments that “were either accused of, or the target of, racist behavior related to the Black Lives Matter movement,” Malik said.

“Yelp’s User Operations team already places alerts on business pages when we notice an unusual uptick in reviews that are based on what someone may have seen in the news or on social media, rather than on a first-hand experience with the business,” Malik added. “For businesses accused of overtly racist actions, where we can link to a news article, we will escalate our warning with the Business Accused of Racist Behavior Alert.”