Home » TV and Movies » Why does Tom Cruise do his own stunts? ‘No one asked Gene Kelly, ‘Why do you dance?’’

Why does Tom Cruise do his own stunts? ‘No one asked Gene Kelly, ‘Why do you dance?’’ 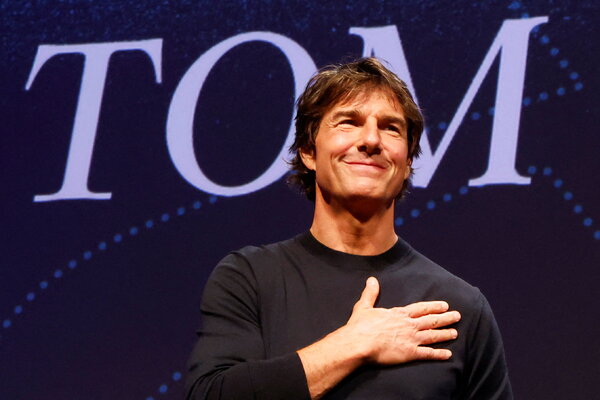 CANNES, France — It has been 30 years since Tom Cruise attended the Cannes Film Festival, and it’s evident the festival would like to make up for lost time.

Perhaps that’s why, in advance of a conversation with the actor billed as a “Rendezvous with Tom Cruise” — which was itself happening in advance of the evening premiere of Cruise’s sequel “Top Gun: Maverick” — the festival played a nearly 15-minute-long clip reel of Cruise’s filmography, hyperbolically scored to Richard Strauss’s “Also sprach Zarathustra.” As the actor and audience watched from their seats, the reel touched on Cruise the action star, Cruise the dramatic thespian and Cruise the romantic, though the latter section, which featured him pitching woo at a bevy of leading ladies, notably left out Cruise’s ex-wife and three-time co-star Nicole Kidman.

“It’s wild seeing this reel,” Cruise said after taking the stage. “It’s like your life in ten minutes — very trippy.”

Cruise was speaking in front of a mostly unmasked crowd in the Salle Claude Debussy, which included hundreds of journalists and a team from Cruise’s agent, CAA. “After everything we’ve been through, it’s such a privilege to see your faces,” he said. He noted that “Top Gun: Maverick” had been held for two years because of the pandemic, though he refused to show it on a streaming service in the meantime. “Not gonna happen!” Cruise said to applause.

The 59-year-old star is insistent that his movies receive a lengthy theatrical window, a mandate that has sometimes put him in conflict with studio heads, who are eager to fill their streaming services with star-driven content. And in an era where big names like Leonardo DiCaprio and Sandra Bullock have no problem appearing in films for Netflix, Cruise remains a rare holdout.

“There’s a very specific way to make a movie for cinema, and I make movies for the big screen,” said Cruise. “I know where they go after that and that’s fine.” He said he even called theater owners during the pandemic to reassure them: “Just know we are making ‘Mission: Impossible.’ ‘Top Gun’ is coming out.”

Cruise is a discursive speaker who will leap out of one anecdote before it’s done to land in another, then another. (Perhaps that would make for an esoteric set piece in one of his action films?) But it was striking how often he returned to his formative experience shooting the 1981 movie “Taps,” in which he acted opposite George C. Scott and found himself fascinated by the way the filmmaking worked. Cruise said that while shooting, he thought, “Please, if I could just do this for the rest of my life, I will never take it for granted.”

And in the absence of any challenging questions from his interlocutor, the French journalist Didier Allouch — who was mostly content to burble blandishments like “You're absolutely extraordinary” to his interview subject — Cruise had the freedom to basically spin his own narrative of being a determined student of cinema and his fellow man. (And “Taps,” of course.)

“I was the kind of kid who always wrote goals on the wall of what kind of movies I liked or what I wanted my life to be, and I worked toward those goals,” Cruise said.

Though the conversation increasingly leaned toward bland generalities — “I’m interested in people, cultures, and adventure,” Cruise said more than once — it did provide one major laugh line when Allouch asked why he was so determined to do his own stunts in the “Mission: Impossible” movies, which will soon be receiving seventh and eighth installments shot back-to-back.

“No one asked Gene Kelly ‘Why do you dance?’” replied the star.