MasterChef’s knockout week continues later on today as the second group of amateurs compete for their chance to progress in the competition and be crowned this year’s champion. Gregg Wallace and John Torode will be on hand to judge the cooks’ efforts but how appetising can all of the dishes be when each contestant waits to bring up their plate one by one.

During an appearance on This Morning from their respective homes, Phil asked the pair if they often have to eat cold or lukewarm dishes.

“How do you keep the food warm? Phil asked. “When you’ve got somebody who cooks and they come in and you have all the others waiting there for their turn.”

“That is the second most asked MasterChef question,” Gregg revealed.

“The most asked question is, ‘When is it on?’ the second most asked is, ‘Is the food cold when you eat it?’” 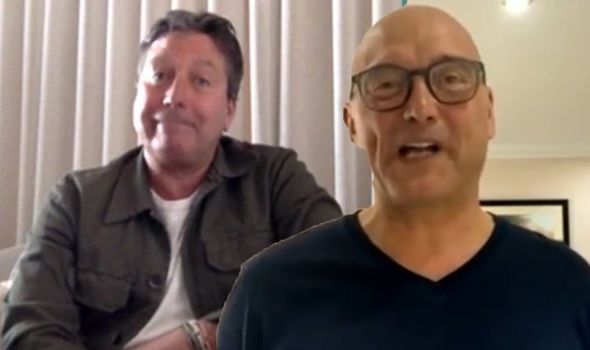 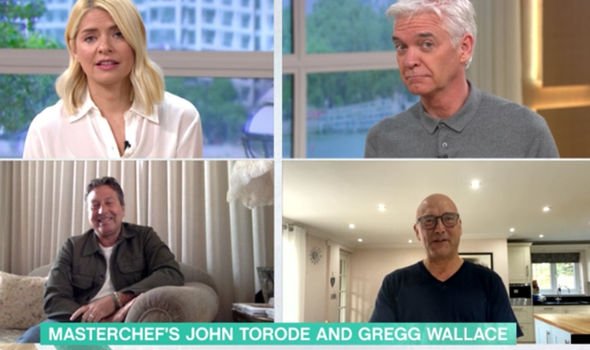 “Can I say no it’s not,” he explained. “It takes a couple of minutes to get around the dishes, they are all room temperature.”

“Now listen to this, if you think about this clearly that is exactly the same temperature as every plate of food you’ve ever finished,” he continued.

“You know you don’t eat hot food you just think you do. I tell you what all of you, Holly, Phil, all of you, the next meal you eat as you get to the last mouthful, touch the plate and tell me what temperature it is.”

“That’s the same temperature as all of the MasterChef food,” he confirmed. 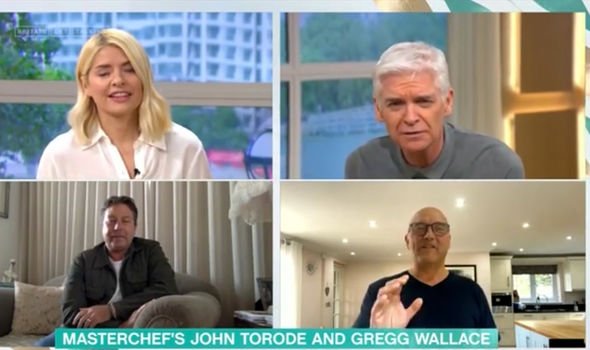 John added: “Also, let’s just remember the best part of a Sunday roast is that little bit of Yorkshire pudding and gravy that’s left on the side and been there for half an hour.”

“That’s the best bit,” John stated before Gregg joked: “No it’s not, it’s the bottle of Claret.”

Phil then asked: “When you’re walking around and they tell you what their making do you ever think, ‘God, I hate that.’”

“Quite often,” John agreed. “That’s one of the things that we do but we’ve got to keep an open mind.

“One of the great things about the show is it does open your mind to different combinations.

“We had somebody this year who was making Thai dishes with olives in, I thought there’s no way in the world that’s going to work.

“But the salty olive takes the place of fish sauce. Somethings do work, somethings we never want to eat again.”

Meanwhile, the lucky contestants who have made it this far in the competition have to take part in a number of challenges to progress.

In tonight’s instalment, the contestants are asked to create a dish for the judges that they have on the menu of their own restaurant or feature in their cookbook.

Three of the eight contestants are sent home and the remaining five head to Manchester to work in the flagship restaurant of 2015 champion, Simon Wood.

Who will impress and who will find the heat in the competition too hard to handle?

MasterChef continues tonight on BBC One at 9pm.

Scientists spot a drop in the vibrations caused by human activity
Women Were Told To Speak Like Doraemon During A Coronavirus Lockdown For Some Reason
Popular News
Major energy supplier to pay thousands of customers up to £100 to use less energy this winter – how to get it | The Sun
29/11/2022
Man Utd wonderkid Ramon Calliste, called ‘the next Giggs’, now owns luxury watch business and makes £5m a year – The Sun
26/03/2020
Megan Thee Stallion Addresses Criticism Over Twerking: ‘I Love to Shake My A**’
26/03/2020
Police guard shops to stop coronavirus panic-buyers and enforce social distancing – The Sun
26/03/2020
Coronavirus: Good Morning Britain’s Dr Hilary reveals ‘game-changing’ self-testing kit
26/03/2020
Recent Posts