Tiger King: Murder, Mayhem and Madness star, Joseph Maldonado-Passage (aka Joe Exotic) is allegedly “worse” than the hit Netflix docuseries portrays him to be. Maldonado-Passage’s niece, Chealsi Putman, has a few things to say about her uncle, providing further insight into the man behind the scenes. Spoiler alert: Her allegations are startling and helped the FBI put Maldonado-Passage behind bars. 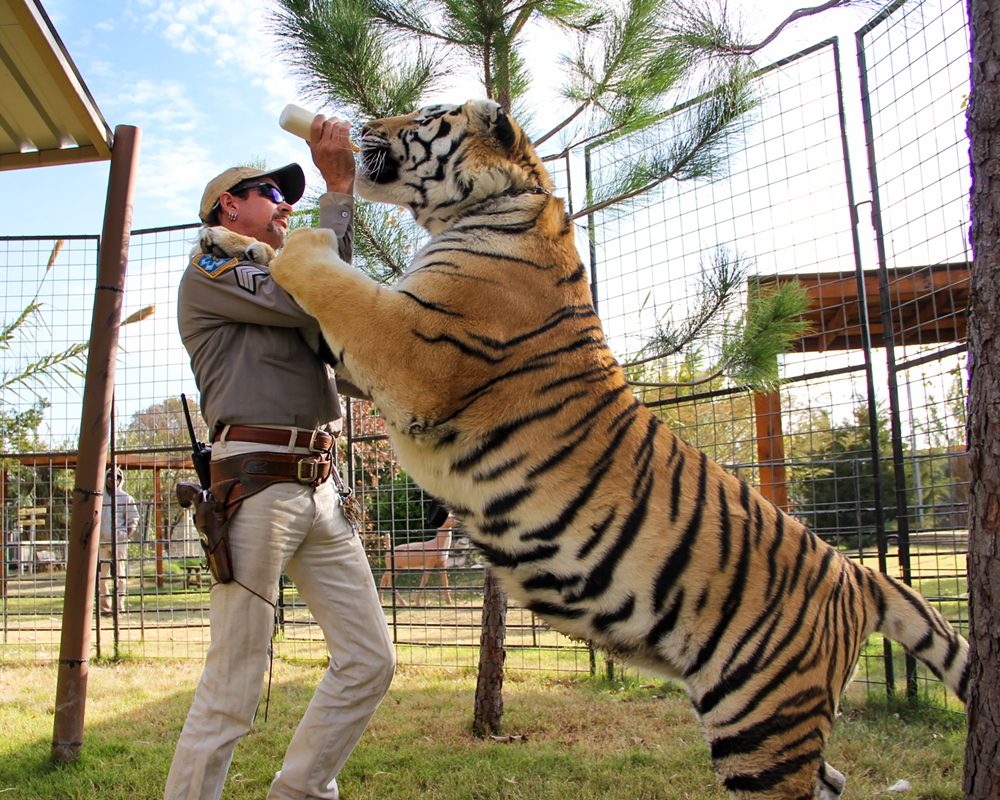 You can’t believe everything you see on TV. Such is the case with Tiger King and its openly gay, mullet-wearing lead, Joseph Maldonado-Passage (aka Joe Exotic) — according to his niece.

31-year-old mother of three, Chealsi Putman, is the daughter of Maldonado-Passage’s youngest sister. She recently opened up to DailyMailTV with claims that her uncle may have started out as a “good guy” who “genuinely cared for the animals,” but that wasn’t the case as the years went by.

Putman worked for Maldonado-Passage on and off at the G.W. Zoo from 1999-2017, before Jeff and Lauren Lowe dissolved the corporation and took over (as seen in Tiger King).

Part of Putman’s work included “cleaning the animal cages, running the cash register and bookkeeping,” according to the outlet. However, the two didn’t exactly get along.

“Our relationship was up and down, mainly because I wouldn’t put up with his bulls**t,” she said, adding a few of the horrors she “personally witnessed” while working at the zoo.

Putman has serious allegations against her uncle

Aside from a few unsavory things Tiger King revealed, Putman said Maldonado-Passage has a history of animal abuse.

“I’ve personally witnessed Joe spray a tiger with a fire extinguisher, not out of a safety or for a life-saving reason, but because the tiger didn’t react the way Joe had wanted it to,” she said.

“Joe always attempted to distance himself from any illegal activity, but he had no problem involving his employees in it. She noted that when her uncle received checks or wire transfers for selling exotic animals under the table, he used someone else’s name.

Other shocking claims include the freezing of tiger cubs.

“Over the years there must have been at least 10 tiger cubs that he froze. I have no idea what happened to them, they would just disappear,” she said adding he took baby monkeys from their mothers by any means (she said he “darted” the mother) to sell them.

“He shot a total of five darts into the mother until she dozed off so he could pry the baby monkey away from its arms. I was disgusted by his actions, he’s lucky the mother monkey didn’t die,” Putman said.

She added there wasn’t much Maldonado-Passage wouldn’t do for a quick dollar.

“In the Tiger King Netflix series, you can see glimpses of his evil persona but in real-life Joe is 100 times worse. I want people to know who the real Joe Exotic is, not the one you’ve seen on TV,” she said.

Putman helped the FBI get Maldonado-Passage

Putman calls her uncle a “cold-hearted criminal,” saying he “kept secrets from his family for years” and “conned her grandparents often.”

In 2018, Maldonado-Passage was allegedly on the run from the FBI for an alleged murder-for-hire plot against animal rights activist, Carole Baskin.

Putman said her uncle’s talk of Baskin was an everyday thing at the zoo, making Putman want to help the FBI catch him. She explained her grandma had a secret phone in which she found Maldonado-Passage’s number. She then gave the number to the FBI which helped them track him down.

“I don’t think he should see the light of day again,” she said. “He needs to rot in hell.”

Maldonado-Passage is currently serving a 22-year sentence in federal prison for 17 counts of animal cruelty and that alleged murder-for-hire plot against Baskin.