Home » TV and Movies » The Witcher Returns for Season 2 With More Talk of the 'Wild Hunt' — Grade It!

The Witcher Returns for Season 2 With More Talk of the 'Wild Hunt' — Grade It!

Geralt of Rivia is deep in his feelings atop The Witcher‘s second season, and it’s going to take more than a little questing to distract him from his pain. The more he quests… the more he feels.

The season premiere, one of eight episodes now streaming on Netflix, picks up directly after that little kerfuffle at Sodden Hill, with soldiers taking stock of casualties and survivors. Believing Yennefer to be among the former, Tissaia relays this fake news to Geralt, who looks devastated enough to cry. (If only he could!) Geralt gives Tissaia a brief “Was it worth it?” speech before doing what he does best — disappearing back into the mist. (Fine, one of the things he doest best. We mustn’t forget that his abilities also include fighting, bathing and bedding. In that order.)

So, where to next for this monster-killing mutant and his lawfully acquired princess? The plan is to hit up Geralt’s hidden hometown of Kaer Morhen (aka Witcher HQ), stopping at a quaint little village along the way. But when their first destination turns out to be empty and unguarded (suspicious!), they chart a new course for Geralt’s “old friend” Nivellen. 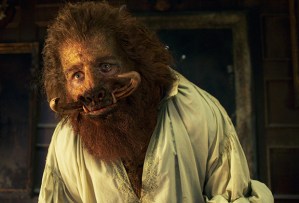 Oh, Nivellen. Where to even begin with this guy? Recently cursed by a priestess for desecrating her temple whilst high on mushrooms, Geralt’s pal is basically living the full Beauty and the Beast fantasy. Not only is he rocking a fugly new face (those tusks!) and a flowy pirate shirt, but he also gets to post up in a magical mansion where warm baths and roasted chickens seem to fall from the ceiling.

And monsters! There are also monsters in the ceiling. One in particular, a seemingly lovely young lady named Vereena who challenges Ciri’s conception of what makes a “monster.” As she reminds the runaway royal, Ciri’s ability to see the future makes her a monster to some — not to mention that with Geralt as her new guardian, she’s pretty much guaranteed to veer down a dark path eventually.

But when Geralt catches Vereena feeding on Nivellen, her true nature as a bruxa is revealed. Her beautiful features twist into a ghoulish face with a gnarly set of teeth, and she uses her powerful wind breath to make the first move against Geralt. What ensues is a phenomenal first battle to kick off The Witcher‘s second season. I mean, Geralt literally stabs this beast through the damn wall at one point. Are you kidding me?

The battle takes a surprisingly heartbreaking turn when Vereena threatens to rip out Ciri’s throat, prompting Nivellen (definitely thought he was dead!) to stab her from behind. Vereena then goes full Exorcist, rotating her head a 180 degrees to look Nivellen in the eyes. “I love you,” she tells him as she pulls herself towards him through the metal lodged in her stomach. But Geralt, who was already out of f–ks before this episode even began, cuts their reunion short by swiping Vereena’s head clean off her body.

As one last, not-at-all-haunting move, Vereena’s disembodied head looks directly at Ciri and delivers this chilling warning: “He’ll come for you, too.” That’s never good to hear from any head, whether it’s connected to a body or not.

And while we’re dissecting prophecies here, we can’t forget about that “portent of doom” Nivellen mentions before s–t hits the fan. He claims to have seen “the Wild Hunt … riding their skeletal horses across the southern sky” just last week, prompting more apocalyptic fears: “The North and South at war, monsters roaming when they should be hibernating, pestilence sweeping the land — maybe it’s the end of days.”

Geralt dismisses this as mere horse s–t, and he’s not entirely wrong. Witcher showrunner Lauren Schmidt Hissrich recently told IGN that the show is deliberately building hype around the Wild Hunt — she’s fully aware of what it means to longtime Witcher fans — but that we shouldn’t expect it anytime soon. “We’re not ready to get to it yet,” Hissrich says.

Other premiere points worth discussing…

* Yennefer awakens in the forest, now in the custody of Fringilla and a handful of surviving Nilfgaardian soldiers. They assume that their leaders will accept Yennefer as a sorry-for-losing-the-battle peace offering, but she rightfully theorizes that they’ll probably be killed anyway. Yennefer instead asks Fringilla to rejoin the Brotherhood, whom she believes will welcome her back with open robes, but that also gets a hard pass. Of course, their entire argument becomes moot in the final moments of the premiere when an unseen enemy surrounds the group and quickly kills off Fringilla’s travel companions. At this point, I’m thinking she might want to consider loosening Yennefer’s chains, because they’re back on the same team whether they like it or not.

* The Brotherhood is currently operating under the belief that Yennefer is dead, and that Fringilla is as good as dead for abandoning all rules of Chaos. And speaking of chaos, Tissaia scores some alone time with their Nilfgaardian prisoner and she gives him the absolute business. When he refuses to tell her what Nilfgaard wants, she doesn’t just magically pull the information from his brain. No, that would be far too chill. This lady jumps straight to taking his knowledge, his memories and his “very being,” with the end goal of trapping him in the “eternal darkness” of his own mind. It’s apparent that she only has two modes: Completely Off and ALL THE WAY ON. No dimmer switch.

Your thoughts on The Witcher‘s beautiful, beastly season premiere? Grade Episode 1 below, then drop a comment with your thoughts on the Netflix series’ long-awaited return.