THE Simpsons writer has been forced to speak out after a fan ‘exposed’ who shot Mr Burns as Homer in a disguise twist.

The series six episode saw Mr Burns gunned down by Maggie, but one Reddit user believes it was actually Homer dressed in disguise as Krusty the Clown who really wanted him dead. 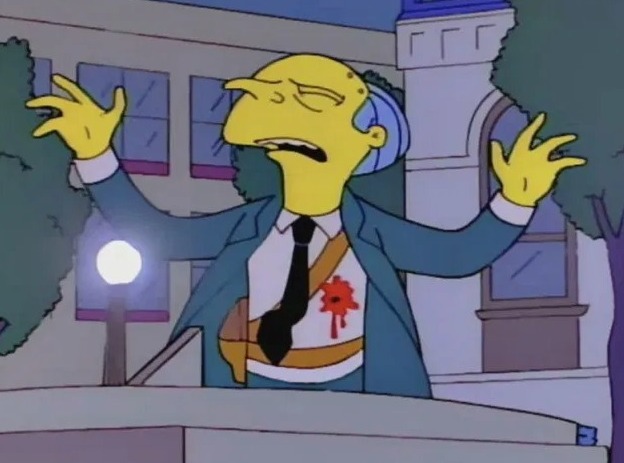 They said: "In the Who Shot Mr Burns episode of The Simpsons, Mr Burns is discovered shortly after being shot and is surrounded by a number of characters, including Krusty the Klown.

"However, on close inspection it is absolutely irrefutable that it isn’t Krusty at all, but Homer Simpson in Krusty makeup (compare to when Homer dressed up as Krusty while in clown college).
“Homer was actively on his way to kill Mr Burns while disguised as Krusty, echoing when he saw Sideshow Bob rob the Kwik-E-Mart while disguised as Krusty, but was beaten by mere seconds when Maggie shot him.”

However, writer Bill Oakley was quick to debunk the theory after it started doing the rounds on social media. 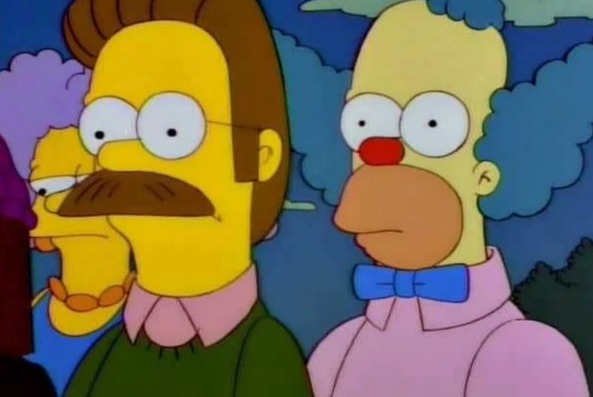 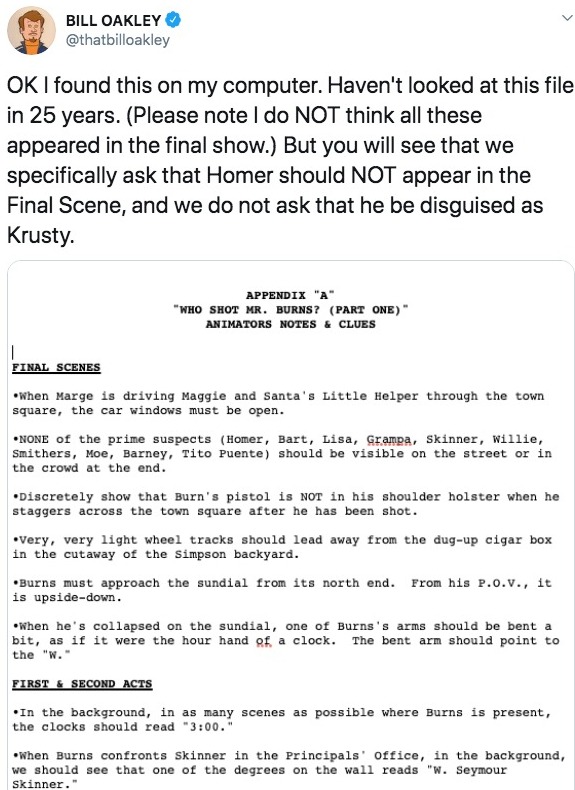 He wrote on Twitter: "Let me clarify and say that if that *is* the “Homer dressed as Krusty” model (and the hair would seem to indicate it is not), we had no idea until today that it was.”

He then shared another tweet featuring a picture of an original script note for the episode to disprove he fan theory.

Bill wrote above the picture: "OK I found this on my computer. Haven’t looked at this file in 25 years. "(Please note I do NOT think all these appeared in the final show.) But you will see that we specifically ask that Homer should NOT appear in the Final Scene, and we do not ask that he be disguised as Krusty.” 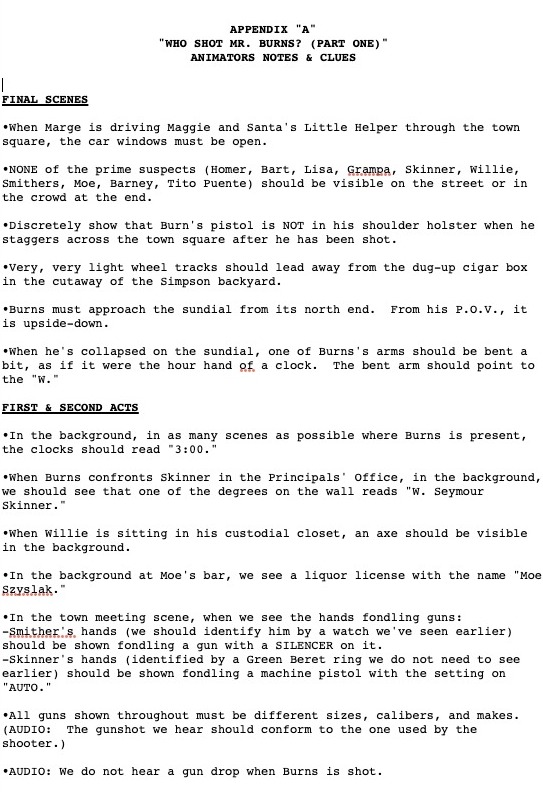 One of the bullet points on the production note read: "NONE of the prime suspects (Homer, Bart, Lisa, Grampa, Skinner, Willie, Smithers, Moe, Barney, Tito Puente) should be visible on the street or in the crowd at the end."

Meanwhile, fans have been left outraged after Disney+ cut some iconic jokes from the show.

In a show like The Simpsons, which relies heavily on jokes and innuendos, cutting out 25 percent of the screen means the removal of some jokes, ruining visual gags, background details, which enrich the show and make it memorable for its viewers.

Related posts:
China’s Government May Step In To Control Theatrical Windows When Cinemas Re-Open
Heather Locklear Is 'Strong and Clear-Headed' After Celebrating 1 Year of Sobriety: Source
Popular News
The Masked Singer: Viking to storm to victory as difficult clues keep identity under wraps
16/01/2021
Man Utd wonderkid Ramon Calliste, called ‘the next Giggs’, now owns luxury watch business and makes £5m a year – The Sun
26/03/2020
Megan Thee Stallion Addresses Criticism Over Twerking: ‘I Love to Shake My A**’
26/03/2020
Police guard shops to stop coronavirus panic-buyers and enforce social distancing – The Sun
26/03/2020
Coronavirus: Good Morning Britain’s Dr Hilary reveals ‘game-changing’ self-testing kit
26/03/2020
Recent Posts
This website uses cookies to improve your user experience and to provide you with advertisements that are relevant to your interests. By continuing to browse the site you are agreeing to our use of cookies.Ok